USGS collaborates with key academic, state, local, and industry partners to provide a new look at what could happen during a major earthquake in the San Francisco Bay Area.

Today, the USGS, along with approximately 60 partners, released a new fact sheet that summarizes a report from a larger study of what could happen during a major earthquake in the San Francisco Bay area along the Hayward Fault – arguably one of the most urbanized and interconnected areas in the nation.  This study is called “The HayWired Earthquake Scenario.”

“The USGS and its partners have worked together to anticipate the impacts of a hypothetical M7.0 earthquake on the Hayward Fault, before it happens, so that people can use the latest science in their efforts to become even better prepared," said Ken Hudnut, USGS Science Advisor for Risk Reduction and one of the lead authors of the HayWired Earthquake Scenario report.

The newly released USGS Fact Sheet, “The HayWired Earthquake Scenario – We Can Outsmart Disaster,” provides a concise overview of what will be a multi-volume report.  The Fact Sheet distills key points of the report and provides the first glimpse of a truly groundbreaking study into earthquake hazard impacts, mitigation efforts, and resiliency actions for communities in and around the San Francisco Bay Area.

What is the HayWired Scenario?

The USGS Science Application for Risk Reduction (SAFRR) team initiated and coordinated collaboration among a diverse group of partners, from academia to public utility companies, to create a hypothetical earthquake scenario in the San Francisco Bay area, including impacts on nearby communities.  SAFRR and its partners are publishing a multi-volume USGS Scientific Investigation Report on the HayWired Earthquake Scenario – the first two volumes are available now (HayWired Scenario Vol. 1 and Vol. 2) and the third volume is expected to be released by October 2018.  Dale Cox, Project Manager for the HayWired Earthquake Scenario, described the far-reaching scope of the project:  "If we all have a common understanding of what will happen before such an earthquake actually strikes, we can reshape a future with reduced losses and injuries from damaged buildings, roads, rails, pipes, wires, and fires.”

Although other earthquake hazard investigations for this area have been published, the HayWired Earthquake Scenario focuses in-depth on key themes not addressed in previous scenarios: the cumulative impacts of aftershocks and fault afterslip, likely performance of buildings constructed under current building codes, urban search and rescue implications, effects of lifeline interdependencies (including the Internet), and communities at risk. With the objective of enhancing resilience, the scenario aims to improve the communication and use of earthquake hazard studies and early warning and aftershock forecast information, and it will inform future building code developments, community capacity building, and business continuity planning.

Ryan Arba from the Earthquake and Tsunami Program within the California Governor’s Office of Emergency Services said, “The HayWired report provides a thorough, comprehensive analysis of the potential impact of a large-scale earthquake in the Bay Area.  The State of California and its local partners have been preparing for decades; however, there is always more that we can do.”  He goes on to say, “We encourage everyone to learn about the HayWired Earthquake Scenario so that they can remain vigilant in their efforts to be prepared for the next earthquake.”

Why Is It Called “HayWired”?

Communications at all levels are crucial during incident response following an earthquake. Damage to critical facilities (such as power plants) from earthquake shaking, and to electrical and telecommunications wires and fiber-optic cables that are severed where they cross a ruptured fault, can trigger cascading Internet and telecommunications outages. Restoring these services is vitally important for emergency-response coordination.

Without good communications, emergency-response efficiency is reduced, and as a result, life-saving response functions can be compromised. Thus, the name “HayWired” was chosen for the scenario to emphasize the need to examine our interconnectedness and reliance on telecommunications and other lifelines such as water and electricity.

Collaboration and Community Engagement are Essential

When asked about earthquakes in the United States, most people think of California.  The “Golden State” is foremost in the public’s mind when we talk about earthquakes and impacts on communities.  In fact, California’s long history of earthquake activity has enabled scientists to obtain critical data that advances understanding of how earthquakes work and what havoc they could wreak in the future.  This study of the Hayward Fault is particularly notable not only for its scientific basis, but also because of the significant and impactful relationships that were either created or strengthened among a variety of partners.

“In 2017, Californians experienced multiple natural and man-made disasters that have had major impacts to lives, businesses, and communities,” said California Business, Consumer Services and Housing Authority (BCSH) Secretary Alexis Podesta. “The HayWired Earthquake Scenario report gives us a common understanding of our risk and will help us collectively prevent natural disasters from becoming ongoing catastrophes. Together we can outsmart disaster.” 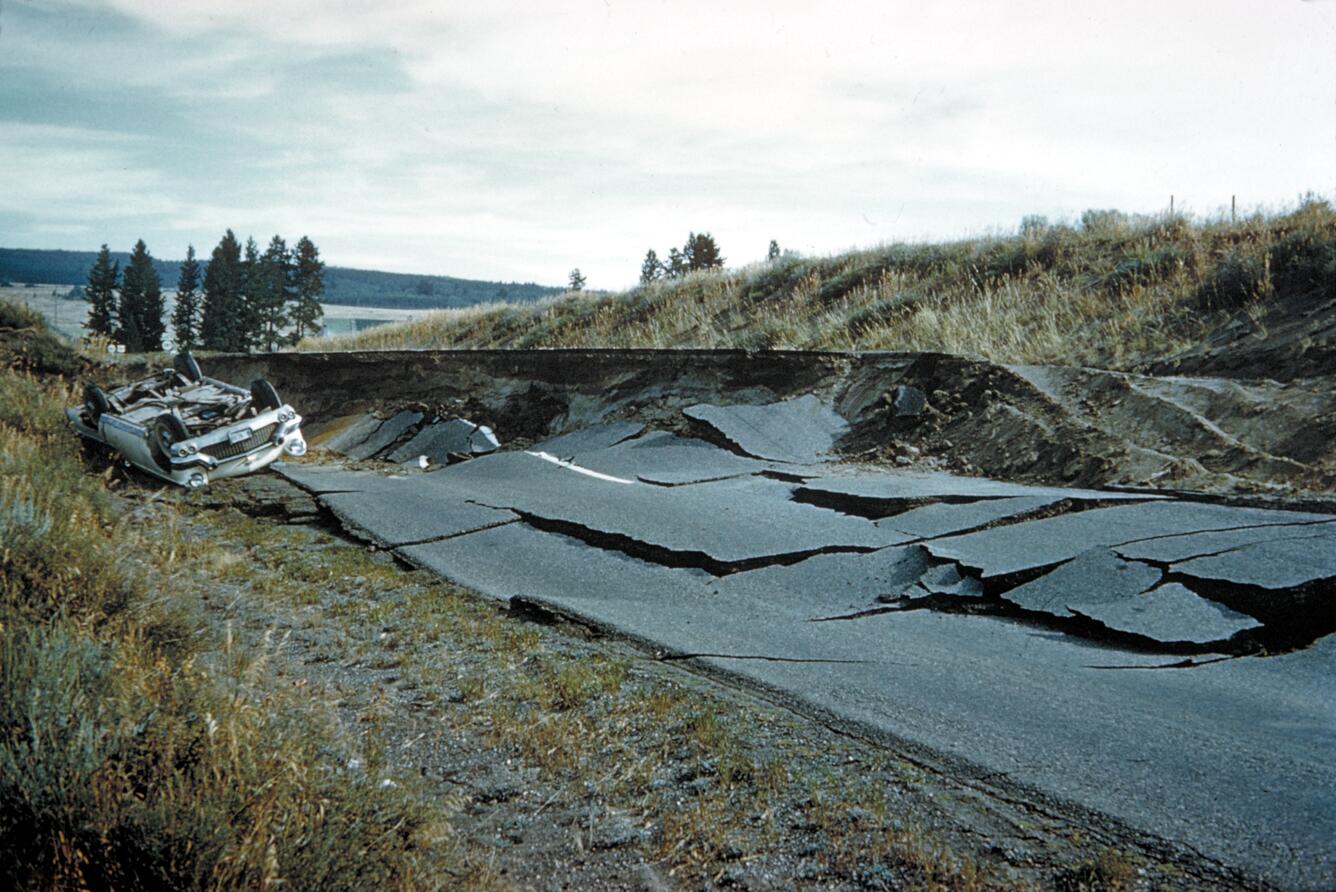 To address an earthquake of this size, in this region, and to address all the integrated aspects of modern life that would be affected– from internet access to water supplies – the USGS garnered an unprecedented level of cooperation across the spectrum of community stakeholders.  Although more work needs to be done, this type of community engagement in the San Francisco Bay Area has already resulted in more resilience to earthquake damage than in the recent past. In fact, after the Loma Prieta earthquake in 1989, approximately $50 billion in infrastructure improvements and other investments were made to reduce earthquake vulnerability across the region.

The USGS partnered with numerous organizations to form the “HayWired Coalition,” whose members’ goal is to identify the scenario’s potential impacts on their constituents and to align the scenario with the resiliency, response, and recovery planning of their respective communities. The coalition began forming in mid-2016 to gather input and organize the interactions of a broad range of stakeholders – from utility companies to the Federal Emergency Management Agency to the Red Cross to design and engineering firms.  This process enhanced the scenario development team by helping to identify previously unrecognized vulnerabilities of communities, lifeline infrastructure, and supply chains.

As the HayWired Earthquake Scenario team examined the possible effects on every aspect of daily life, it was important to understand what people would need to get their lives back to normal.  The USGS worked closely with the State of California to ramp up a public-engagement campaign that would use the scenario as a catalyst to make communities aware of earthquake risk, to help them understand what they can do to mitigate the impact of an earthquake, and how to bounce back once the shaking stops.  The campaign is called “Outsmart Disaster,” and is led by the Seismic Safety Commission, which falls under the BCSH.  Additionally, the USGS worked closely with the California Geological Survey and the California Office of Emergency Services to obtain a comprehensive view of the region’s current level of preparedness and its potential for improved resiliency.

Ken Hudnut summed up the spirit of the HayWired Coalition, saying, "Teamwork and partnerships have truly been the key to our success in developing the HayWired Earthquake Scenario.”

The USGS provides science that is critical for understanding earthquake risk, because communities can plan more effectively for earthquakes if they know when and where damaging earthquakes are likely to occur and what their effects might be – from the shaking that accompanies a mainshock and its aftershocks to secondary effects like landslides, liquefaction, and fault afterslip.  Incorporation of new models from the USGS and its various partners ensure the HayWired Earthquake Scenario reflects the best and most current understanding of earthquake science and engineering.

Earthquakes pose a threat to the safety of more than 143 million people living in the United States, and estimated long-term annualized earthquake losses in the United States are more than $6.1 billion per year.  The social and economic losses associated with deaths, injuries, and damage to property and infrastructure can be significantly reduced if communities understand the risk and take proactive steps to mitigate that risk.

Earthquake risk and exposure continues to increase with population growth and expanded development in hazard-prone regions of the country. Understanding earthquake hazards is critical for informed policies, priorities, strategies, and funding decisions to protect communities most at risk.

For up-to-date information on earthquakes in the U.S. and around the world, go to the USGS Latest Earthquakes page

The USGS provides rapid alerts of potential impacts from an earthquake through its Prompt Assessment of Global Earthquakes for Response system.

Sign up to receive earthquake notices through the USGS Earthquake Notification System.

If you feel an earthquake, report your experience on the USGS “Did You Feel It?” website.

Learn how to prepare at home using the 7 Steps to Earthquake Safety from the guidebook “Putting Down Roots in Earthquake Country,” written for different areas of the country and in several languages.

Additional information on what you can do to prepare for earthquakes at work and home is available on the Great ShakeOut website.

The HayWired scenario depicts a scientifically realistic earthquake sequence, and its cascading impacts, that all starts with a magnitude 7 earthquake on the Hayward Fault. The scenario emphasizes connectedness: multi-hazards of an earthquake, interactions between critical infrastructure systems, and compounded effects in communities and economies.
By
Natural Hazards, Science Application for Risk Reduction
link
January 18, 2018

The HayWired scenario depicts a scientifically realistic earthquake sequence, and its cascading impacts, that all starts with a magnitude 7 earthquake on the Hayward Fault. The scenario emphasizes connectedness: multi-hazards of an earthquake, interactions between critical infrastructure systems, and compounded effects in communities and economies.
Learn More
April 17, 2018

ForewordThe 1906 Great San Francisco earthquake (magnitude 7.8) and the 1989 Loma Prieta earthquake (magnitude 6.9) each motivated residents of the San Francisco Bay region to build countermeasures to earthquakes into the fabric of the region. Since Loma Prieta, bay-region communities, governments, and utilities have invested tens of billions of dollars in seismic upgrades and retrofits and replac
By
Natural Hazards, Earthquake Hazards, Science Application for Risk Reduction, Earthquake Science Center
April 17, 2018

The HayWired earthquake scenario, led by the U.S. Geological Survey (USGS), anticipates the impacts of a hypothetical magnitude-7.0 earthquake on the Hayward Fault. The fault is along the east side of California’s San Francisco Bay and is among the most active and dangerous in the United States, because it runs through a densely urbanized and interconnected region. One way to learn about a large e
By
Natural Hazards, Earthquake Hazards, Earthquake Science Center
March 23, 2018

The HayWired Scenario: An Urban Earthquake in a Connected World - A Geonarrative

What might it be like the next time the Hayward Fault has a large earthquake? A geonarrative and related imagery examines a hypothetical earthquake, the magnitude 7.0 HayWired earthquake scenario.