With the global inventory of Earth observation satellites growing by the week, questions of data quality and integration take on great significance.

Vast troves of new satellite data promise to expand opportunities for global forest and crop monitoring, disaster recovery tracking, water use mapping, and fire danger forecasting, but only if the remote sensing community can trust its validity and accuracy.

More useful still would be datasets that are not only trustworthy, but fold easily into and compliment data collected by long-serving and trusted satellites such as Landsat.

It’s fitting, then, that interoperability and data harmony will be top of mind for attendees of the 18th annual Joint Agency Commercial Imagery Evaluation (JACIE) Workshop this year, which runs Sept. 24-26, 2019 at the headquarters of the U.S. Geological Survey (USGS) in Reston, VA.

The workshop brings together professionals who characterize and calibrate data from government-owned and commercial satellites to share ideas, methods, and evaluations, as well as to collaborate on potential improvements.

The event’s title and attendee list for 2019 speak to the ever-shifting business of satellite technology. “The Rapidly Changing World in Remote Sensing” will include presentations from partners like the USGS, National Aeronautics and Space Administration (NASA), the National Oceanic and Atmospheric Administration (NOAA), the European Space Agency (ESA), as well as from commercial companies like Planet, Astro Digital, and MAXAR.

The pool of potential presenters continues to grow. There are now 55 countries with Earth observation satellites. Last year alone, the U.S. launched 84 new satellites. China, Japan, and India have launched an additional 14, six, and five, respectively.

“We live in a multi-data world, and that’s what this workshop is all about,” said Jon Christopherson, a contractor who specializes in calibration at the USGS Earth Resources Observation and Science (EROS) Center near Sioux Falls, SD. “As more and more datasets become available, how do we use them together?”

This year’s JACIE workshop is co-located with the third annual EROS Center Calibration and Validation Center of Excellence (ECCOE) Workshop, set to begin at 9 a.m. Eastern on Sept. 23 in the USGS Reston Dallas Peck Auditorium.

The ECCOE session has a tighter interoperability focus. “Calibrating Geo-Synchronous and Polar-Orbiting Satellites: Sharing Best Practices” will explore how satellites in geostationary orbit—such as NOAA’s Geostationary Operational Environmental Satellite (GOES) 16 and 17—might work in tandem with satellites like Landsat to improve the utilization of multiple systems.

The sensors on GOES satellites image the entire United States once every five minutes at a spatial resolution of 5. To 2 kilometers, from 22,300 miles up. Satellites like Landsat fly below it every 99 minutes to image swaths of the Earth at moderate resolution – from 15 to 100 meters per pixel - while smaller satellites on a similar track collect high resolution images of 15 meters or less.

The ECCOE workshop theme is part of a larger conversation about leveraging all those sources to improve data quality.

“We’re exploring the possibility of using them together,” Christopherson said.

Imagine zooming in from a GOES image of the Eastern United States to a Landsat image of Chesapeake Bay, then finally to a close-up view of a small stretch of the Potomac River bank. All those data are collected today. All three views can offer insight on an Atlantic hurricane’s path and impact in the days before and after it makes landfall.

In practice, datasets have differences both large and small, and each sensor has its own set of calibration challenges. On the calibration side, polar-orbiting satellite data need to account for constant movement - adjustments less critical for a geostationary satellite. There are spectral differences to consider beyond the size of each pixel, as well—slight differences in readings collected by individual sensors across similar portions of the electromagnetic spectrum.

If sensors of varying capabilities are used to calibrate one another, it could both improve the data and ease the burden of stitching datasets together.

“Part of intercalibration is, ‘Can we adjust for those differences that they have in sensor characteristics and capabilities that influence the data and products?’” said Kevin Gallo, a NOAA scientist and co-developer of a Land Product Characterization System (LPCS) at EROS. “It’s not only the spatial resolution—whether it’s 30 meters, or 1 kilometer or 2 kilometers—but the spectral resolution, time of satellite overpass, and other considerations.”

The ECCOE team is involved with several efforts to build and refine best practices for calibration and data quality worldwide beyond annual workshops. ECCOE contributes to international groups like the Committee for Earth Observation Satellites (CEOS) and the Global Space-based Inter-Calibration System (GSICS), for example, each of which serve to foster collaboration.

Gallo likens the standards being discussed today for Earth observation satellites to those agreed upon years ago for weather observation data. To establish accurate weather records, for example, temperatures need to be logged at set times each day—not 7 a.m. at one observation station and 10 a.m. at a different station, and so on. Consistent observations with similar instruments make it possible to compare of data from multiple locations.

Earth observation requires similar attention to detail, which is why sun-synchronous satellites gather new imagery over the same areas at approximately the same time of day. It’s also why sites with stable spectral readings such as sandy deserts or the lunar surface are used to calibrate spectral data, and why agencies share those sites at workshops like JACIE and ECCOE.

With so many new data sources coming online every year and so much value promised through interoperability, the importance of calibration and validation will only increase.

- For more information on the JACIE workshop or to register, visit this site

- For more on the ECCOE workshops or to register, click here 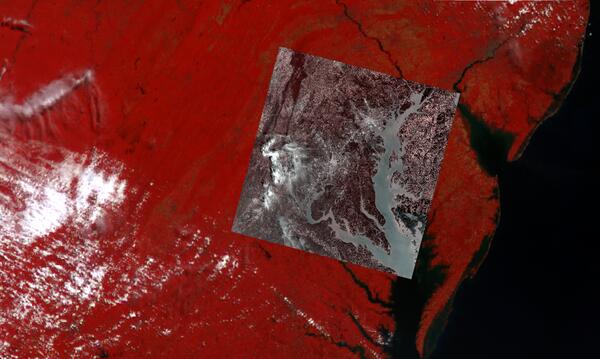 Forty-six years ago, there was a single Earth observation satellite circling the globe – Landsat 1.

By 1988, four countries operated such satellites...