Craters of the Moon: Idaho's last (and next?) volcanic eruption

Idaho is home to several young volcanoes, including the Craters of the Moon, Wapi, Kings Bowl, North and South Robbers, Cerro Grande, Hells Half Acre, and Shoshone lava fields. Craters of the Moon is one of the youngest volcanic areas in Idaho and may be the most likely in the state to erupt again.

Yellowstone Caldera Chronicles is a weekly column written by scientists and collaborators of the Yellowstone Volcano Observatory. This week's contribution is from Zach Lifton, geologist with the Idaho Geological Survey.

Archeological evidence suggests that Shoshone indigenous people visited the Craters of the Moon area as early as 12,000 years ago. It is therefore likely that the Shoshone witnessed some of the eruptions at Craters of the Moon, the most recent of which ended about 2,100 years ago. The area was noted as a unique landscape by western explorers in the mid-1800s. In his 1837 biographical book The Adventures of Captain Bonneville, Washington Irving described the area in less-than-glowing terms: "… nothing meets the eye but a desolate and awful waste … and where nothing is to be seen but lava." However, others recognized the beauty and scientific value of the area, and in 1924 it was formalized as a National Monument.

Craters of the Moon is made of over 60 lava flows that erupted between 15,000 and 2,100 years ago. The lava field covers over 600 square miles. Eight different eruption episodes are known, and each episode lasted hundreds to perhaps thousands of years. An interesting feature of Craters of the Moon is that about the same volume of lava was erupted during each episode, therefore it is considered to be "volume-predictable". Volcanologists therefore expect the next eruption to produce 1-1.5 cubic miles of lava.

The primary hazard of future eruptions of Craters of the Moon will most likely be slow-moving lava flows that can travel as far as 20 miles from their source. While the populated communities of Carey and Arco are not expected to be directly affected by the next eruption, the lava flows can threaten rangeland and farms. Eruptions may also impact transportation: U.S. Highways 20, 26, and 93 pass through or near the volcanic area.

While Craters of the Moon will almost certainly erupt again (perhaps within the next 1,000 years), it is not considered a high-risk volcano. Earlier this year, the U.S. Geological Survey published their 2018 update to the National Volcanic Threat Assessment, which is an effort to prioritize research, monitoring, and mitigation at volcanoes in the U.S. The threat assessment categorizes volcanoes as very low, low, moderate, high, and very high threats. Four volcanoes in Idaho are listed in the threat assessment, all of them described as "low" threat: Craters of the Moon, Hells Half Acre, Black Butte Crater, and Wapi Flow. Nevertheless, we remain vigilant to the volcanic threat in Idaho, with regional monitoring stations well established to warn of any potential future activity. 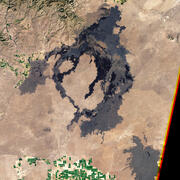 When the Craters of the Moon volcanic field erupts again, it will likely display a variety of eruption styles from high lava fountaining to quiet outpouring of lava flows.

When the Craters of the Moon volcanic field erupts again, it will likely display a variety of eruption styles from high lava fountaining to quiet outpouring of lava flows.

When erupting, all volcanoes pose a degree of risk to people and infrastructure, however, the risks are not equivalent from one volcano to another because of differences in eruptive style and geographic location. Assessing the relative threats posed by U.S. volcanoes identifies which volcanoes warrant the greatest risk-mitigation efforts by the U.S. Geological Survey and its partners. This update
By
Volcano Hazards, Volcano Science Center
link
June 18, 2018

YVO – not just Yellowstone! Meet the volcanoes of the American Southwest!

The Yellowstone Volcano Observatory (YVO) is aptly named – the consortium of 8 organizations collaborates to study and monitor the active geologic...