This article is part of the Spring 2022 issue of the Earth Science Matters Newsletter.

Across the United States, lands historically covered by forests and wetlands have been converted for agricultural uses and urban population centers. One impact of these land use changes is altered water quality in streams and rivers that drain affected watersheds due to modified vegetation, soils, hydrology, and management practices. Streams and rivers are vitally important for human and ecosystem health and services. As such, improved understanding of the effects of land use change on various aspects of water quality is needed.

One such aspect of water quality is dissolved organic matter (DOM). DOM is composed of a group of complex chemical compounds that includes dissolved organic carbon (DOC), and nitrogen- and sulfur-containing organic compounds that are foundational in aquatic nutrient cycling and food webs. DOM is delivered to streams and rivers through runoff and groundwater from the surrounding terrestrial environment. It can also be produced within streams and rivers by microbes and aquatic vegetation.

To better understand the impacts of human land use on stream and river DOM, research scientists from USGS and Florida State University measured and compared DOM molecular composition of small streams and rivers draining predominantly forest, agriculture, or urban land use in the Upper Mississippi River Basin. Nine streams and rivers with varying drainage areas were selected based on the dominant land-cover classification in their watersheds (determined from the 2016 National Land Cover Database; figure 1).

Three streams were in the Minneapolis-St. Paul metropolitan area of Minnesota (“urban”), and six streams/rivers were in rural Wisconsin: three in agricultural areas (“agriculture”) and three in forest-wetland areas (“forested”) having very little urban development. Water samples were collected several times over one and a half years targeting the full range of seasons (spring, summer, fall, winter). Samples were analyzed for DOC concentration using a standard carbon analyzer, and for DOM molecular composition using an ultrahigh-resolution analytical technique capable of identifying the presence of tens of thousands of chemical formulae, providing a unique fingerprint of DOM for each stream sample.

Clear and distinct differences in the molecular composition, or fingerprint, of DOM were evident in streams and rivers draining different land use types. First, the molecular richness of DOM (defined by the number of different chemical formulae identified) was significantly higher for agricultural and urban streams compared to forested streams (figure 2). Second, of the 27,400 formulae identified across all samples, the majority (~76%) were associated with just agricultural and urban land uses (figure 3). In other words, certain compounds were more likely to be found in some land use types than the others. For example, in comparison to forest stream DOM, agricultural stream DOM had higher associations with nitrogen-containing compounds, and urban stream DOM was enriched in sulfur-containing compounds,

These results reveal how land use imparts a chemical fingerprint that is carried in stream and river dissolved organic matter. The components of DOM, organic carbon and nutrients, play important roles in eutrophication, hypoxia, binding of metals for downstream transport, and production and emission of greenhouse gases. Knowing what specific chemical compounds make up the fingerprints of land use helps us understand how land management activities impact water quality, and the subsequent implications for carbon and nutrient cycling in streams and rivers impacting ecosystem and human health. 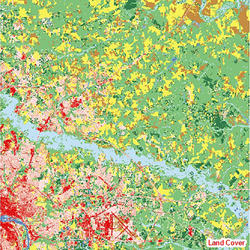 EROS is central to the creation of the National Land Cover Database (NLCD), which is updated every five years and stands as the definitive land cover database for the United States.
Learn More
October 7, 2021