Coral reefs along densely populated shorelines are especially vulnerable to the effects of ocean acidification amplified by local pollution, according to a study by USGS scientists reported in the Journal of Geophysical Research: Oceans.

Corals around the world are already stressed by ocean acidification—the gradual decline in seawater pH as the ocean absorbs increasing amounts of CO2 from the atmosphere. Lower pH (greater acidity) slows calcification, the process by which corals and other marine species make their skeletons out of the mineral calcium carbonate. It also increases rates of coral bioerosion—the breakdown of coral by other organisms—and it can cause carbonate skeletons and sand to dissolve.

The authors show that polluted, low-pH groundwater discharging onto a shallow coral reef off Kahekili Beach Park in west Maui, Hawai‘i, further increases seawater acidity and exposes corals to nitrate concentrations 50 times higher than normal. Such land-based pollution could contribute to the collapse of coastal coral reef ecosystems sooner than predicted based on ocean acidification alone.

“What we’ve shown here is that local stressors work in concert with global changes in ocean conditions to accelerate coral reef decline through nutrient driven-bioerosion,” said Nancy Prouty, lead author of the study.

The recent report synthesizes field and laboratory work done over the past several years (for example, see “Examining the Chemistry of Seawater and Coral to Promote the Health of West Maui’s Coral Reefs”). To carry out the multifaceted study, research oceanographers from the USGS Pacific Coastal and Marine Science Center in Santa Cruz, California (Prouty, Curt Storlazzi, Peter Swarzenski), and the USGS St. Petersburg Coastal and Marine Science Center in St. Petersburg, Florida (Kim Yates) joined forces with scientists from the Woods Hole Oceanographic Institution (Anne Cohen) and Hawai‘i’s Division of Aquatic Resources (Darla White). The team analyzed the chemistry of groundwater flowing into the ocean through seafloor springs near the reef, and measured rates of calcification and bioerosion in coral cores collected near and far from the springs.

The lower pH of the polluted groundwater slows calcification of new coral skeleton, and the excess nitrates accelerate the growth of organisms, such as algae, bacteria, and sponges, that break down the coral. Bioerosion is a natural process, but if it proceeds more quickly than calcification, the reef will decline. “In the case of Kahekili Beach Park,” said Prouty, “excess nutrients in the effluent appear to be accelerating bioerosion.”

To measure rates of calcification and bioerosion, the scientists collected cores of corals near the seep site and almost half a mile to the north. They obtained computerized tomography (CT) scans (series of X-ray images) from the Woods Hole Oceanographic Institution’s Computerized Scanning and Imaging Facility. Analysis of the scans showed that bioerosion of coral off Kahekili Beach Park is proceeding at rates up to 8 times greater than expected for corals growing away from pollution. This bioerosion has drastically weakened local coral reefs for more than 10 years and could lead to the collapse of the underlying reef structure. Losing the reef would mean losing the benefits it provides, such as supporting fish populations and protecting the shoreline from coastal hazards like storm waves.

Polluted groundwater is just one of many local stressors that affect corals around the world; others include overfishing, sediment-laden runoff, vessel groundings, and other recreational impacts. The USGS study shows how these pressures can exacerbate global threats to coral health.

“As the ocean changes, reducing stressors at a local scale could be vital for preserving coral reefs,” said Prouty.

The USGS study was published in the December 2017 issue of the American Geophysical Union (AGU) Journal of Geophysical Research: Oceans (see “Vulnerability of Coral Reefs to Bioerosion From Land-Based Sources of Pollution”). It was also featured on AGU’s GeoSpace blog see “(Polluted groundwater eroding Hawaiian coral reefs, study shows”) and reported by the Honolulu Star-Advertiser and the Associated Press (see “Scientists say sewage injected into ocean damaging coral off of Kahekili shoreline”). 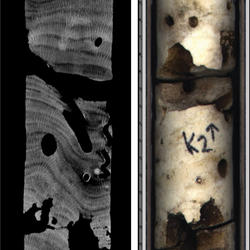 As part of the USGS Coral Reef Project, we are developing new and unique oceanographic and environmental archives from coral skeleton records to better understand the compounding effects of land-use and environmental change on coral reef health.
Learn More