Most sediment descriptions consist of quantifiers, modifiers, and objects (qmO) and can be written as linear expressions:

In most cases the sediment fraction is the whole sample; the presence of rock, seaweed, and biota are recorded explicitly by the dbSEABED program.

brown fine sand with abundant shells; seagrass and some pebbles; whiff of h2s

the dbSEABED coding is:

where "-" on modifiers points to modified object, and "/" on quantifiers points to the quantified object. The use of abbreviations helps distinguish data from metadata in the data files, and makes descriptions shorter, easier to process, and easily interpreted by humans.

The qmO coding for texture is then:

where the 'brown', 'seagrass' and 'h2s' are not shown because they are neutral for texture.

The textural objects are each assigned a grain size, which might be cast as Fuzzy Set Memberships if across a range of grain sizes (example: from "sandy gravel"), or may be a single size fraction percentage (Crisp Set; example: from "coarse sand").

The dbSEABED program assigns the 'sand' grain size as the median of grain sizes observed for sediments labeled simply as 'sand' (phi range -1 to 4, mean value 1.5 phi or 0.35 mm). Where a modifier is applied, the assigned grain size is adjusted; for example, 'fine sand' is assigned a mean grain size of 2.5 phi (0.18 mm).

'Shells' has a textural meaning; when used generically it is assigned a fine gravel mean grain size of -2 phi (4 mm). More specific citations (i.e., mollusks, shell debris) are assigned textural values based on the species and preservation. 'Pebble' is assigned a phi size of -3.5 (11.3 mm).

Relative weighting within the equation occurs with the application of quantifiers. For example, in the equation above, the quantifiers 'abundant' and 'some' assign weights to the 'shell' and 'pebble' portions and adjust the memberships of the assigned phi grain sizes. The dbSEABED thesaurus (which includes the coding for words) assigns these as 0.5, and 0.3, respectively. The unquantified 'sand' is usually assigned a weight of 1.0.

The relative presence of 'shells', 'seagrass', and 'h2s' are approximated by the dbSEABED program in a similar fashion, and reported in the usSEABED dataset about seafloor components and features.

More information about the parsing of the dbSEABED program and its other functions can be found in the usSEABED data publications. 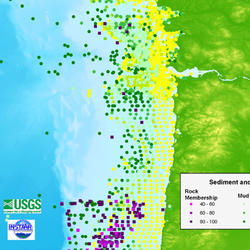 usSEABED is the collaborative product of the U.S. Geological Survey, the University of Colorado, and other partners, and provides integrated data from small and large marine research efforts by many entities—federal and state agencies, local authorities, universities, as well as private and public consortiums.
Learn More
link 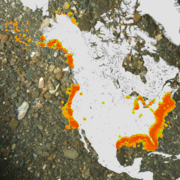 Since the second half of the 20th century, there has been an increase in scientific interest, research effort, and information gathered on the geologic sedimentary character of the continental margins of the United States. Data and information from thousands of sources have increased our scientific understanding of the geologic origins of the margin surface, but rarely have those data been...
Learn More
link 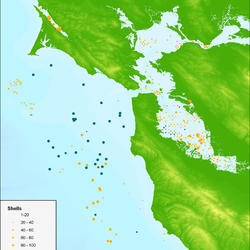 The USGS data release for the usSEABED database enables search and download of six interlinked files of output data and a seventh file that provides linked information about the original data sources. These files can be downloaded in their entirety and are also searchable through an online interface that allows for search and selection either through a GIS display or through a web form. Both...
Learn More
link 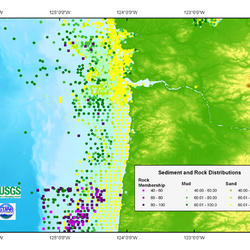 At the core of usSEABED is dbSEABED, a data-mining program based on the application of fuzzy set theory to marine geological and biological data. Fuzzy set theory allows expansion of coverage of the seafloor by the use of word-based data from core logs, sample descriptions, photos, and videos, as well as the more standard numeric data from a laboratory.
Learn More
link