USGS studies sources of pesticide exposure for bees and other pollinators

Field study in California describes the potential for pollinator-attractive field borders in agricultural areas to become a pesticide exposure pathway to bees through soil, air, and plants.

Native bees and honey bees (Apis mellifera) are critical for food crop pollination in agroecosystems, yet their populations are declining worldwide. Studies have indicated that some of the bee declines may be related to factors such as substantial loss of habitat and exposure to environmental contaminants, including pesticides used during crop production.

Pollinator-attractive field border plantings (for example, hedgerows and forb strips) are commonly used to promote bee conservation and have been shown to increase bee diversity and abundance in agricultural areas. However, there is a data gap in the science, concerning if plants may contain pesticides from use on adjacent crops and unintentionally result in pesticide exposure for native bees in these plantings.

Understanding the pathways of bee exposure to pesticides (for example, from border plantings, soils where ground bees nest, and the air [drift]) is important in order to design future best management practices that maximize crop production while maintaining protection to bees and other pollinators.

The U.S. Geological Survey and University of California-Berkley scientists completed a study to fill this data gap and better understand pathways for pesticide exposure for different groups of bees in an agricultural landscape. As part of this study, they examined pesticides in native bees, honey bees, flowers, soil, and air (via passive samplers) at field sites on eight farms in an intensively managed agricultural landscape in Yolo and Colusa Counties, California.

Their findings indicate there are several potential pathways of exposure for bees in agriculture landscapes including the air, flowers, and soils that the bees are exposed to during their daily search for food and nesting.  A wide variety of pesticides (8 insecticides, 13 herbicides, 12 fungicides, and 4 degradates) were detected in bees, plants, soil, and air.  The five pesticides detected most frequently across all samples were the insecticide bifenthrin; the herbicides thiobencarb, metolaclor, and propanil; and the fungicide fluopyram.

The factors contributing to pesticide exposure for bees in agricultural landscapes are complex. Scientists determined that pollinator-attractive field border plants contained pesticides despite pesticides never having been directly applied. Given the detections of pesticides in the soil and air, it is possible the pesticides in the border plants originated from aerial drift and (or) uptake from the soil. In addition to being exposed to pesticides while foraging, bees can encounter pesticides during most activities that they engage in during flight (via aerial sprays or the dust from planting of treated seeds), while walking or resting on the surface of plants and soils, during nesting (in soil, leaves, resins, wax, and other materials), and while feeding.

The pesticide bifenthrin was detected in bee bodies at levels associated with potential sublethal effects in honey bees.  Because little is known about how exposure to mixtures of pesticides can change the toxicity of individual pesticides, studies that analyze only a subset of pesticides (for example, neonicotinoids alone) and a subset of bee species (emphasis on honey bees) may not be broad enough to understand if there are larger ecological consequences.

Although this study generated important insights for pesticide exposure to bees in an intensively managed agricultural landscape, much remains to be learned about the frequency of exposure, toxicity of pesticides to native bees and honey bees foraging in agricultural landscapes, and the factors driving differences in pesticide concentrations in bees (metabolism and (or) detoxification), which may lead to lower concentrations in some species. Studies to understand how a number of traits are relevant to pesticide exposure for bees, including sociality, fecundity, nest type (for example, substrate, materials, and period), flower preferences, adult and larval food, body size, and other anatomical and physiological characteristics (for example, how pollen is transported and metabolism), would provide detailed information useful for consideration of future mitigation steps.

This study was supported by the U.S. Department of Agriculture Natural Resources Conservation Service (CIG-69-3A75-12-253 to The Xerces Society), the U.S. Geological Survey Environmental Health Program, and by a University of California Berkeley Connect Fellowship and a University of California Agriculture and Natural Resources Cooperative Extension Graduate Fellowship.

Select feature articles related to pollinators are listed below. 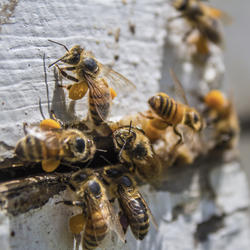 Since its inception in 1933, the U.S. Farm Bill has been one of the most influential federal policies for agriculture and food production. Provisions within the Farm Bill have profound influence on global trade, nutrition programs, commodity crop programs, rural communities, and land conservation. Northern Prairie’s research quantifies the impact on pollinator forage and health of USDA...
By
Ecosystems, Energy & Wildlife, Wildlife Program, Northern Prairie Wildlife Research Center
link
June 26, 2018

Since its inception in 1933, the U.S. Farm Bill has been one of the most influential federal policies for agriculture and food production. Provisions within the Farm Bill have profound influence on global trade, nutrition programs, commodity crop programs, rural communities, and land conservation. Northern Prairie’s research quantifies the impact on pollinator forage and health of USDA...
Learn More
link 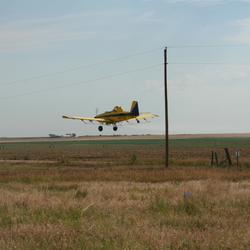 There is a lack of knowledge and understanding of how widespread use of pesticides may affect bees as they move across a diverse agricultural landscape. Studies have shown there are impacts to honey bees due to exposure to pesticides including neonicotinoid insecticides and fungicides, but the effects of these compounds on native pollinators are largely unknown.
By
Ecosystems, Fort Collins Science Center
link
December 8, 2016

There is a lack of knowledge and understanding of how widespread use of pesticides may affect bees as they move across a diverse agricultural landscape. Studies have shown there are impacts to honey bees due to exposure to pesticides including neonicotinoid insecticides and fungicides, but the effects of these compounds on native pollinators are largely unknown.
Learn More
link 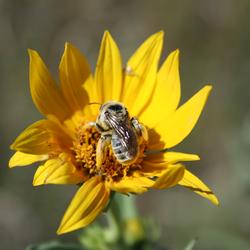 Native Bees are Exposed to Neonicotinoids and Other Pesticides

Native Bees are Exposed to Neonicotinoids and Other Pesticides

A recent reconnaissance study by the U.S. Geological Survey (USGS) demonstrates the first observed occurrence of pesticides, including neonicotinoid insecticides, in wild-caught native bees. The results indicate that native bees collected in an agricultural landscape are exposed to multiple pesticides including insecticides, fungicides, and herbicides. This reconnaissance study is the first step...
Learn More
January 21, 2022

To better understand the exposure of wild bees to pesticides in an agricultural landscape, samples were collected from fields in northern California. Hedgerows are known to provide habitat for wild bees, but these bees may also be exposed to pesticides from nearby agricultural fields. The study included eight hedgerow sites located in an intensively managed agricultural landscape that includes alm
By
Ecosystems, Contaminant Biology, Environmental Health Program, Toxic Substances Hydrology, California Water Science Center
April 15, 2020

Lab-reared colonies of Bombus huntii (Hunt bumble bee) were deployed in a commercial cherry orchard in the spring of 2016. A fungicide formulation containing boscalid (25.2%) and pyraclostrobin (12.8%) was applied one time at the recommended label rate. Nectar and pollen were collected daily, beginning two days before spray application and continuing for ten days following. Nectar samples were ext
By
California Water Science Center

Select related publications are listed below.

Understanding habitat needs and patch utilization of wild and managed bees has been identified as a national research priority in the United States. We used occupancy models to investigate patterns of bee use across 1030 transects spanning a gradient of floral resource abundance and richness and distance from apiaries in the Prairie Pothole Region (PPR) of the United States. Estimates of transect
By
Ecosystems, Northern Prairie Wildlife Research Center
April 22, 2021

Bumble bees, Bombus spp. (Apidae), are important native pollinators; however, populations of some species are declining in North America and agricultural chemicals are a potential cause. Fungicides are generally not highly toxic to bees, but little is known about sublethal or synergistic effects. This study evaluates bumble bee exposure to fungicides by quantifying concentrations of boscalid and p
By
Ecosystems, Water Resources, Contaminant Biology, Environmental Health Program, Toxic Substances Hydrology, Oregon Water Science Center
October 29, 2019

Native bees are in decline as many species are sensitive to habitat loss, climate change, and non-target exposure to synthetic pesticides. Recent laboratory and semi-field assessments of pesticide impacts on bees have focused on neonicotinoid insecticides. However, field studies evaluating influences of neonicotinoid seed treatments on native bee communities of North America are absent from the li
By
Cooperative Research Units
January 15, 2016

The awareness of insects as pollinators and indicators of environmental quality has grown in recent years, partially in response to declines in honey bee (Apis mellifera) populations. While most pesticide research has focused on honey bees, there has been less work on native bee populations. To determine the exposure of native bees to pesticides, bees were collected from an existing research area
By
Ecosystems, Water Resources, Contaminant Biology, Environmental Health Program, Toxic Substances Hydrology, California Water Science Center
June 16, 2010

Bees are important pollinators, but evidence suggests that numbers of some species are declining. Decreases have been documented in the honey bee, Apis mellifera (which was introduced to North America), but there are no monitoring programs for the vast majority of native species, so we cannot be sure about the extent of this problem. Recent efforts to develop standardized protocols for bee sampl
By
Ecosystems, Eastern Ecological Science Center, Patuxent Wildlife Research Center
Scientists Research pesticide Residues in Bees