Water-Quality Data for the Nation

Learn all about water!

Nutrients, such as nitrogen and phosphorus, are essential for plant and animal growth and nourishment, but the overabundance of certain nutrients in water can cause several adverse health and ecological effects.

Nutrients, such as nitrogen and phosphorus, are essential for plant and animal growth and nourishment, but the overabundance of certain nutrients in water can cause a number of adverse health and ecological effects. Nitrogen, in the forms of nitrate, nitrite, or ammonium, is a nutrient needed for plant growth. About 78% of the air that we breathe is composed of nitrogen gas, and in some areas of the United States, particularly the northeast, certain forms of nitrogen are commonly deposited in acid rain.

Of course, nitrogen is used in agriculture to grow crops, and on many farms the landscape has been greatly modified to maximize farming output. Fields have been leveled and modified to efficiently drain off excess water that may fall as precipitation or from irrigation practices.

This image shows Sugar Creek in Indiana, as it has been extensively modified for human use. As commonly found in small agricultural streams, Sugar Creek has been straightened, deepened, and had tile drains installed to favor rapid removal of water from agricultural lands. If excess nitrogen is found in the crop fields, the drainage water can introduce it into streams like these, which will drain into other larger rivers and might end up in the Gulf of Mexico, where excess nitrogen can lead to hypoxic conditions (lack of oxygen).

Although nitrogen is abundant naturally in the environment, it is also introduced through sewage and fertilizers. Chemical fertilizers or animal manure is commonly applied to crops to add nutrients. It may be difficult or expensive to retain on site all nitrogen brought on to farms for feed or fertilizer and generated by animal manure. Unless specialized structures have been built on the farms, heavy rains can generate runoff containing these materials into nearby streams and lakes. Wastewater-treatment facilities that do not specifically remove nitrogen can also lead to excess levels of nitrogen in surface or groundwater.

Nitrate can get into water directly as the result of runoff of fertilizers containing nitrate. Some nitrate enters water from the atmosphere, which carries nitrogen-containing compounds derived from automobiles and other sources. More than 3 million tons of nitrogen are deposited in the United States each year from the atmosphere, derived either naturally from chemical reactions or from the combustion of fossil fuels, such as coal and gasoline. Nitrate can also be formed in water bodies through the oxidation of other forms of nitrogen, including nitrite, ammonia, and organic nitrogen compounds such as amino acids. Ammonia and organic nitrogen can enter water through sewage effluent and runoff from land where manure has been applied or stored.

Sources of nitrogen to the Gulf of Mexico

Fertilizers used on crops, air pollution, and manure are some of the major sources of nitrogen transported from the Mississippi River Basin to the Gulf of Mexico.

Problems with excess levels of nitrogen in the environment

Excess nitrogen can cause overstimulation of growth of aquatic plants and algae. Excessive growth of these organisms, in turn, can clog water intakes, use up dissolved oxygen as they decompose, and block light to deeper waters. Lake and reservoir eutrophication can occur, which produces unsightly scums of algae on the water surface, can occasionally result in fish kills, and can even "kill" a lake by depriving it of oxygen. The respiration efficiency of fish and aquatic invertebrates can occur, leading to a decrease in animal and plant diversity, and affects our use of the water for fishing, swimming, and boating.

Too much nitrogen, as nitrate, in drinking water can be harmful to young infants or young livestock. Excessive nitrate can result in restriction of oxygen transport in the bloodstream. Infants under the age of 4 months lack the enzyme necessary to correct this condition ("blue baby syndrome").

Variation of nitrate across the United States

The concentration of nitrate (a form of nitrogen) of water bodies vary widely across the United States. Natural and human processes determine concentration of nitrate in water. The National Atmospheric Deposition Program has developed maps showing nitrate patterns, such as the one below showing the spatial pattern of nitrate at selected sampling sites for 2002. You should be aware that this contour map was developed using the nitrate measurements at the specific sampling locations; thus, the contours and isolines were created using interpolation between data points. You should not necessarily use the map to document the nitrate of a water body at a particular map location, but rather, use the map as a general indicator of nitrate throughout the country.

Much of the Nation uses groundwater at its main source of water for many needs, from drinking water and other home uses to irrigation to public uses, such as supplying water to parks. Of course, geology and the factors that affect the availability of groundwater vary greatly geographically, but many places, such as southern Georgia, have aquifers that can supply a lot of freshwater very near the land surface. Since nitrogen contamination is more of a problem in shallow aquifers, it is worthwhile to be aware of what aquifers in the United States would be more at risk for nitrogen contamination.

Developed for a USGS study, the map below shows those areas with the highest risk for contamination of shallow groundwater by nitrate. Generally, aquifer vulnerability is represented by soil-drainage characteristics—the ease with which water and chemicals can seep to groundwater—and the extent to which woodlands are interspersed with crop land. Use of the risk map to identify and prioritize contamination at a more detailed level than presented here is not advised because local variations in land use, irrigation practices, aquifer type, and rainfall can result in nitrate concentrations that do not conform to risk patterns shown at the national scale.

Below are other science projects associated with nitrogen and nutrients. 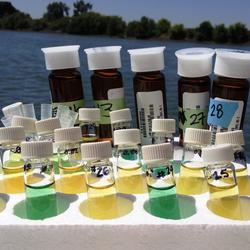 USGS scientists have gained a better understanding of the nutrient supply and how nutrients affect habitat quality, algal productivity, and food-web dynamics in the Bay-Delta.
link
August 9, 2016

USGS scientists have gained a better understanding of the nutrient supply and how nutrients affect habitat quality, algal productivity, and food-web dynamics in the Bay-Delta.
Learn More
link 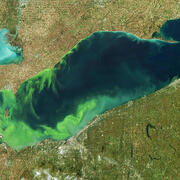 Nutrients, such as nitrogen and phosphorus, are essential for plant and animal growth and nourishment, but the overabundance of certain nutrients in water can cause a number of adverse health and ecological effects.
link
June 5, 2018

Nutrients, such as nitrogen and phosphorus, are essential for plant and animal growth and nourishment, but the overabundance of certain nutrients in water can cause a number of adverse health and ecological effects.
Learn More
link 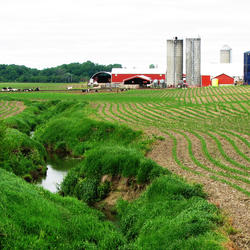 Nitrogen and phosphorus are essential nutrients—yet too much of a good thing is not always a good thing. Scientists are investigating nutrient pollution down the Mississippi River.
link
December 15, 2016

Nitrogen and phosphorus are essential nutrients—yet too much of a good thing is not always a good thing. Scientists are investigating nutrient pollution down the Mississippi River.
Learn More
link 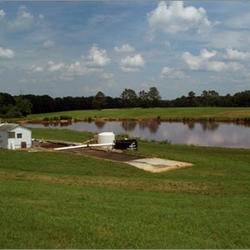 This collaborative project between the U.S. Environmental Protection Agency (USEPA) and the USGS was conducted as part of a larger research program being undertaken by USEPA and the U.S Department of Agriculture at several research sites throughout the United States. Goals included:1. Obtain detailed data concerning the survival of pathogenic microorganisms from manure applied to soil under...
By
South Atlantic Water Science Center (SAWSC)
link
October 24, 2016

This collaborative project between the U.S. Environmental Protection Agency (USEPA) and the USGS was conducted as part of a larger research program being undertaken by USEPA and the U.S Department of Agriculture at several research sites throughout the United States. Goals included:1. Obtain detailed data concerning the survival of pathogenic microorganisms from manure applied to soil under...
Learn More

Below are multimedia items associated with nitrogen. 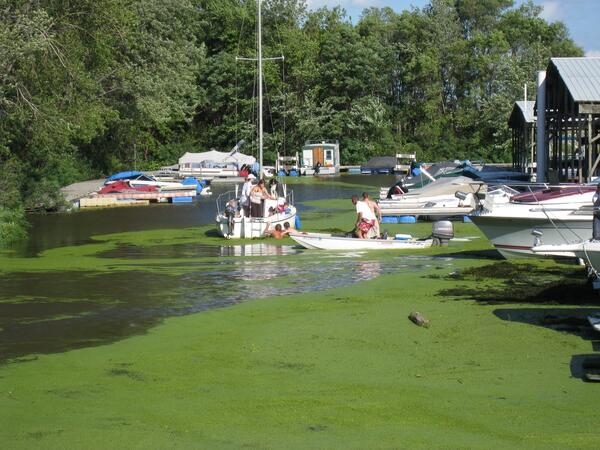 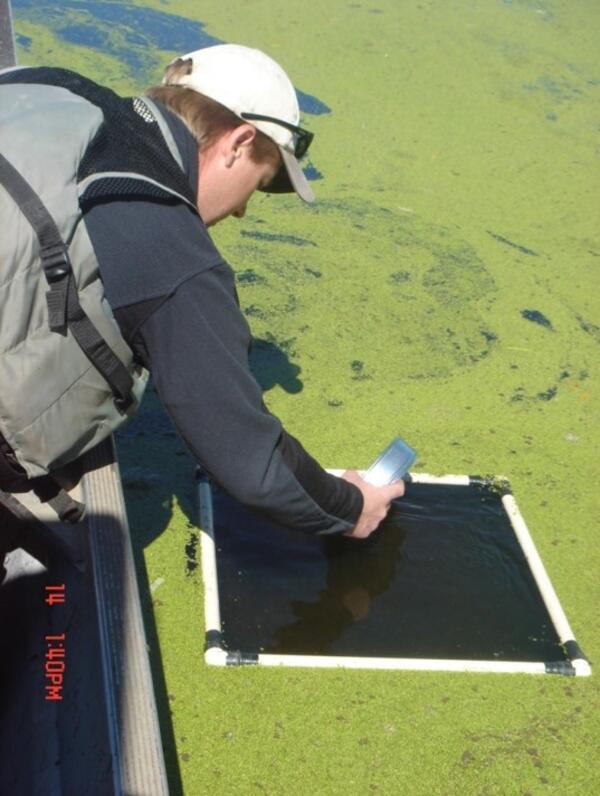 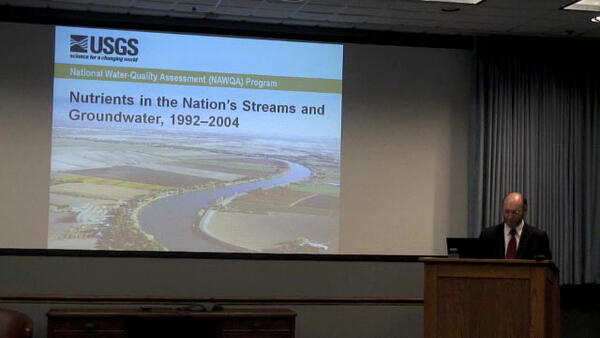 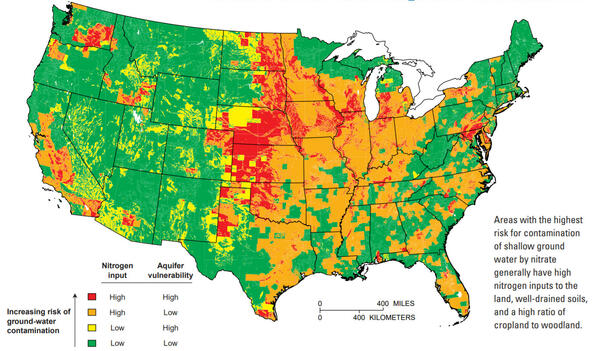 The U.S. Geological Survey has studied nitrogen and its effect on the aquatic environment extensively. Below are some publications you can use to further investigate this topic.

Nutrients in the Nation's Waters--Too Much of a Good Thing?

Historical data on nutrients (nitrogen and phosphorus) from about 12,000 ground-water and more than 22,000 stream samples have been compiled and related to possible sources. This existing information was collected by many agencies for a variety of purposes. Therefore, though it can be used to determine where concentrations differ, the exact percentages should not be taken as those for the Nation a
August 1, 2017

Temporal changes in nitrogen and phosphorus concentrations with comparisons to conservation practices and agricultural activities in the Lower Grand River, Missouri and Iowa, and selected watersheds, 1969–2015

This report presents the results of a cooperative study by the U.S. Geological Survey and Missouri Department of Natural Resources to estimate total nitrogen (TN) and total phosphorus (TP) concentrations at monitoring sites within and near the Lower Grand River hydrological unit. The primary objectives of the study were to quantify temporal changes in TN and TP concentrations and compare those con
By
Water Resources, Central Midwest Water Science Center
June 1, 1999

The quality of our nation's waters: Nutrients and pesticides

This report is the first in a series of nontechnical publications, 'The quality of our nation's waters,' designed to describe major findings of the National Water-Quality Assessment Program regarding water-quality issues of regional and national concern. Sources, seasonal and geographic patterns of occurrence, and long-term trends are evaluated for nutrients and pesticides in streams and ground wa
By
Water Resources

Below are data or web applications associated with nitrogen.

The GLRI Edge-of-Field Monitoring project focuses on identifying and reducing agricultural sources of excess nutrients which can threaten the health of the Great Lakes. This geonarrative details the basics of edge-of-field monitoring (EOF), explores EOF applications, shows USGS is working collaboratively with our partners, and discusses how EOF can improve conservation efforts.

Below are news stories associated with nitrogen. 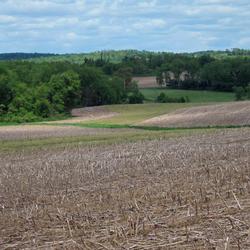 Nitrogen and phosphorus are essential nutrients—yet too much of a good thing is not always a good thing. Scientists are investigating nutrient...