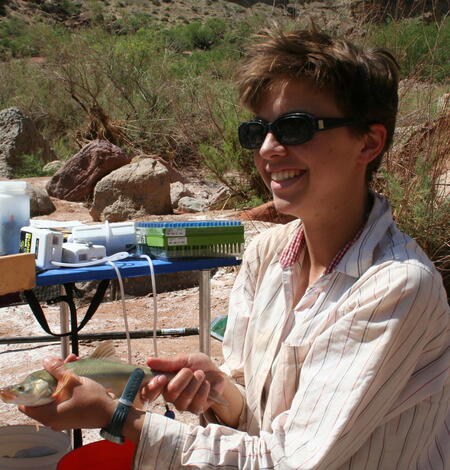 These tabular data were compiled to estimate abundance from paired physical capture and antenna detection data in closed, open, and robust design mark-recapture models. These data represent humpback chub capture histories in the Little Colorado River (LCR) and in the juvenile chub monitoring (JCM) reach of the Colorado River in the Grand Canyon, Arizona. The dataset includes multistate capture his
By
Southwest Biological Science Center
May 13, 2021

These data were compiled to examine rates of skipped migration in adult humpback chub that spawn in the Little Colorado River (LCR). These data include mark-recapture information from the lower 13.56 kilometers of the LCR and from the Colorado River, from river kilometer 105.5-145.7 downstream of Glen Canyon Dam. Data also include detections from a multiplexer array (MUX) that is located in the LC
By
Southwest Biological Science Center
March 22, 2020

These data were compiled here to fit various versions of Bayesian population models and compare their performance, primarily the time required to make inferences using different softwares and versions of code. The humpback chub data were collected by US Geological Survey and US Fish and Wildlife service in the Colorado and Little Colorado Rivers from April 2009 to October 2017. Adult fish were cap
By
Southwest Biological Science Center
August 30, 2018

Assessing the population impacts and cost‐effectiveness of a conservation translocation

Managers often move, or translocate, organisms into habitats that are assumed to be suitable, however the consequences of these translocations are usually not rigorously assessed. Robust assessment of these management experiments should consider impacts to both donor and recipient populations and compare the cost‐effectiveness of translocations to other actions.Here we evaluate translocations of a
By
Ecosystems, Southwest Biological Science Center
February 12, 2021

Choosing whether or not to migrate is an important life history decision for many fishes. Here we combine data from physical captures and detections on autonomous passive integrated transponder (PIT) tag antennas to study migration in an endangered fish, the humpback chub (Gila cypha). We develop hidden Markov mark-recapture models with and without antenna detections and find that the model fit wi
By
Ecosystems, Southwest Biological Science Center
August 27, 2020

Changes in prey, turbidity, and competition reduce somatic growth and cause the collapse of a fish population

Somatic growth exerts strong control on patterns in the abundance of animal populations via effects on maturation, fecundity, and survival rates of juveniles and adults. In this paper, we quantify abiotic and biotic drivers of rainbow trout growth in the Colorado River, AZ, and the resulting impact on spatial and temporal variation in abundance. Inferences are based on approximately 10,000 observa
By
Ecosystems, Southwest Biological Science Center
February 29, 2020

A need for speed in Bayesian population models: A practical guide to marginalizing and recovering discrete latent states

Bayesian population models can be exceedingly slow due, in part, to the choice to simulate discrete latent states. Here, we discuss an alternative approach to discrete latent states, marginalization, that forms the basis of maximum likelihood population models and is much faster. Our manuscript has two goals: 1) to introduce readers unfamiliar with marginalization to the concept and provide worked
By
Ecosystems, Southwest Biological Science Center
March 26, 2018

Introduced species are frequently implicated in declines of native species. In many cases, however, evidence linking introduced species to native declines is weak. Failure to make strong inferences regarding the role of introduced species can hamper attempts to predict population viability and delay effective management responses. For many species, mark–recapture analysis is the more rigorous form
By
Ecosystems, Energy & Wildlife (unpublished), Southwest Biological Science Center
November 16, 2017

Ecologists estimate vital rates, such as growth and survival, to better understand population dynamics and identify sensitive life history parameters for species or populations of concern. Here, we assess spatiotemporal variation in growth, movement, density, and survival of subadult humpback chub living in the Little Colorado River, Grand Canyon, AZ from 2001–2002 and 2009–2013. We divided the Li
By
Ecosystems, Southwest Biological Science Center
January 1, 2013

We collected Salt Creek pupfish (Cyprinodon salinus salinus) from Salt Creek, Death Valley, California, in November 2009 and May 2010. The purpose of our study was to determine whether otoliths displayed interpretable marks that might be used for estimating age and growth. Otoliths exhibited alternating bands of opaque and translucent material. Kendall rank correlation between number of bands on o
By
Cooperative Research Units
October 6, 2012