The 3DEP products and services available through The National Map consist of lidar point clouds and digital elevation models (DEMs) at various horizontal resolutions. All 3DEP products are available, free of charge and without use restrictions. 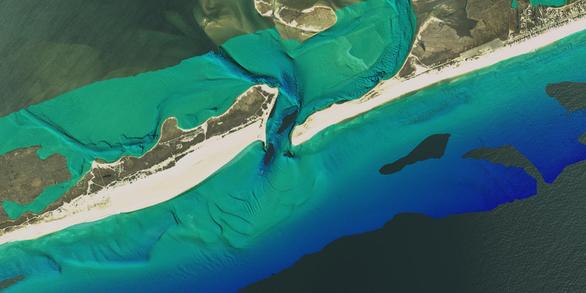 Lidar point cloud: These data are the foundational data for 3DEP in the conterminous U.S., and contain the original three-dimensional information from which the DEM products are derived. Most of the data collected in 2014 and later meet 3DEP specifications for quality level 2 nominal pulse spacing and vertical accuracy, and data collected prior to 2014 often do not meet the quality level 2 specification. Distinctions in nominal pulse spacing are provided in the lidar point cloud status graphics and in the download platform; however, other qualities such as vertical accuracy must be examined to determine if the data meet particular 3DEP quality level specifications.

Source resolution DEMs:  these data are the original bare earth DEMs derived from lidar point cloud source. Source DEM’s processed by the USGS after January 2015 are provided where the original DEM horizontal resolution or projection differ from the 3DEP standard DEM datasets.

IfSAR digital surface model (DSM):  These 5 meter rasters, available only in Alaska, are the initial IfSAR product. DSMs provide elevation values of landscape features on the earth's surface. This topographic product contains the height of the highest surface on the ground including vegetation, man-made structures, and bare earth.

IfSAR digital terrain model (DTM): provide elevation values of the underlying terrain of the earth’s surface. This topographic product reflects the height of bare earth where the elevations of vegetation and man-made features have been removed.

EarthExplorer can be used to search, preview, and download IFSAR Alaska data. The collection is located under the Digital Elevation category.

Standard DEMs represent the topographic surface of the earth and contain flattened water surfaces. Each DEM dataset is identified by its horizontal resolution and is produced to a consistent set of specifications. Standard DEMs are characterized either as project-based or seamless. Project-based DEMs are available for the full areal extents of projects when produced from light detection and ranging (lidar), or as one-degree blocks with overedge when produced from IfSAR. Seamless DEMs are produced by blending only the highest quality project data into a continuous terrain surface for the U.S. These data are distributed in tiles that can be merged to support analysis across large geographic areas.

A color visualization of the compass direction that a hillside or slope faces, measured clockwise in degrees from 0 (due north) to 360 (again due north)

The hillshade computed from 6 different directions

A color visualization of the maximum rate of change in value from that cell to its neighbors; flat surfaces are gray, shallow slopes are yellow and steep slopes are orange 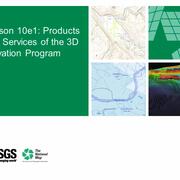 Lesson 10e1: Products and Services of the 3D Elevation Program

In this lesson, you will learn about the lidar products available through the 3D Elevation Program (which is abbreviated as “3DEP”). The lesson will introduce 3DEP, discuss the lidar data available, and where to find the data.

The USGS 3D Elevation Program (3DEP) is excited to announce the availability of a new way to access and process lidar point cloud data from the 3DEP...