Since 2006, the USGS has cooperated with many federal, state, and tribal agency partners in the detection of and response to Avian Influenza (AI) viruses including highly pathogenic AI (or HPAI) viruses in wild birds in North America. Avian influenza, also known as "bird flu", is a viral disease that infects domestic poultry and wild birds. HPAI is an ecologically and economically significant avian disease that is spreading among wild and domestic birds throughout North America.

Avian influenza viruses occur naturally in wild birds such as ducks, geese, and shorebirds around the world. Not all AI virus are harmful. HPAI is a specific type of bird flu that causes serious disease and death in domestic poultry but can also be harmful to wild birds. In 2014, wild birds introduced HPAI viruses from East Asia to North America via Alaska. This introduction resulted in an outbreak that continued into 2016 and resulted in the death or destruction of approximately 50 million domestic birds in the U.S., and an unknown number of wild birds, with economic losses estimated to total approximately $3 billion U.S. dollars. In December 2021, HPAI was again detected in wild birds in North America. Though the current outbreak of HPAI does not pose a significant risk to human health, it is causing greater mortality in wild birds than previous outbreaks of HPAI in North America.

Migratory flyways and intercontinental movements of waterfowl have facilitated the dispersal of HPAI viruses during the current outbreak. More than 2 million birds from 94 species migrate to Alaska from Asia each spring. Extensive research and surveillance for AI viruses by USGS since 2006 provide us with a good understanding of common wild bird hosts in North America. Collaborative ongoing research is helping us to better understand how this outbreak is different from those previous and how to be better informed and prepared for possible future outbreaks.

In this Q & A, Dr. Andy Ramey, a Research Wildlife Geneticist and Director of the Molecular Ecology Laboratory at the USGS Alaska Science Center, talks about research on avian influenza viruses. He explains how HPAI affects wild and domestic birds, potential risk for hunters, the importance of science to help understand the risks of this global disease and provides information and resources that can help you stay informed.

Q. How is the current outbreak of HPAI different from those prior?

Q. Is there a risk to public health from HPAI? What should people do if they see a sick or dead wild bird?

A. The Centers for Disease Prevention and Control (CDC) is the lead agency pertaining to HPAI and human health. Although the CDC currently considers the HPAI viruses causing the ongoing outbreak in North America to pose a low risk to public health, anyone with potential work or recreational exposures to HPAI-affected wild bird should consult the CDC website for the latest guidance.

People observing birds displaying signs of HPAI infection (a lack of coordination, stumbling, inability to stand upright, inability to fly, swimming in circles, a twisted neck, or paralysis) should alert their local federal or state wildlife management office.  Here in Alaska, the public should call the USFWS Alaska Sick/Dead Bird Hotline at 1-866-527-3358. Alaska Bird FAQ: if it's sick, abandoned, injured or dead

Q. How is the USGS contributing to the outbreak response?

A. The USGS is contributing in numerous ways to the interagency response to the ongoing outbreak of HPAI in North America. Prior to the start of the outbreak, the USGS organized a webinar series to facilitate interagency communication, coordination, and planning for outbreak response efforts. Upon the start of the outbreak in North America, various USGS offices have supported wild bird sampling efforts ultimately leading to HPAI detections at areas across the U.S. The USGS National Wildlife Health Center has provided critically important diagnostic support during the ongoing outbreak, facilitating a better understanding of the species and geographic distribution of HPAI across the U.S. Additionally, USGS staff from across the country continue to provide research, support services, and tools.  These include genetic sequencing of AI viruses and modeling of wild bird movements relative to AI infection, which facilitate a better understanding of the spread of HPAI through space and time.

Q: How can the public stay informed and learn more about bird flu in Alaska or other states in the U.S.?

A. There are many publicly available websites that the public may use to stay apprised of the latest detections of HPAI in Alaska and throughout the U.S. Links to some of these websites are provided below.

Hunters - how to protect yourself

Hunters - how to protect yourself 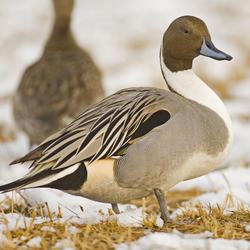 Since 2006, the USGS Alaska Science Center has been part of the State and Federal interagency team for the detection and response to highly pathogenic (HPAI) viruses in North America. Avian influenza or "bird flu" is a viral disease that primarily infects domestic poultry and wild birds. Avian influenza viruses are naturally occurring in wild birds such as ducks, geese, swans, and gulls. These...
By
Ecosystems, Biological Threats and Invasive Species Research Program, Wildlife Program, Alaska Science Center
link
July 13, 2017

Since 2006, the USGS Alaska Science Center has been part of the State and Federal interagency team for the detection and response to highly pathogenic (HPAI) viruses in North America. Avian influenza or "bird flu" is a viral disease that primarily infects domestic poultry and wild birds. Avian influenza viruses are naturally occurring in wild birds such as ducks, geese, swans, and gulls. These...
Learn More
August 25, 2022

The USGS Ecosystems Mission Area provides science to understand wildlife diseases, including avian influenza (AI). Avian influenza viruses occur naturally in wild birds such as ducks, geese, swans, and gulls. These viruses generally do not cause illness in wild birds but they can be highly pathogenic and cause illness and death in poultry and wildlife. Learn more with this geonarrative.