Mass removal of the invasive silver carp Hypophthalmichthys molitrix and bighead carp Hypophthalmichthys nobilis (collectively referred to as bigheaded carp) is a primary management action in the United States to contain population growth and reduce upstream dispersal. Efficient capture and removal techniques are required to achieve this goal, and the USGS is working to develop and evaluate such methods.

The USGS is part of the Invasive Carp Regional Coordinating Committee (ICRCC) and is focused on the research and development of techniques that could help natural resource managers better manage and control invasive carp populations in the United States. Bigheaded carp are notoriously difficult to catch using traditional gears developed for native fish species. However, their evasive behavior and gear avoidance can be advantageous to actively move aggregations into areas where they can be efficiently removed or harvested.

Early work has confirmed herding bigheaded carp with acoustic stimulus (broadband) or electric stimulus is feasible to increase catch rates in entanglements nets. When utilizing these stimuli in conjunction, we found that corralling bigheaded carp into large beach seines was profoundly effective, and the implementation of this technique (i.e., the modified unified method of clearing block nets and forcing fish to a harvest location) resulted in the removal of nearly 240,000 lbs of bigheaded carp from a 300-acre reservoir in St. Louis, MO. This achievement warranted further research and refinement and thus, we initiated a rigorous field-based study to assess bigheaded carp herding effectiveness in the context of mass removal/harvest. We software edited the playback recording of the acoustic stimulus to increase noise complexity and reduce likelihood of fish habituation. We reconfigured the anode array design specifically for herding to increase voltage range (vertical and horizontal). In addition, we produced an electric goal table to ensure consistent power transfer to fish according to variable ambient conductivity of the water and manipulate movements in fish. The following herding techniques were evaluated: (1) a method commonly used by commercial fishers in the United States (trimming the propellor near the water surface and revving the motor to eject plumes of water and striking the boat hull with a blunt object), (2) electric (pulsed-DC electrofishing boat), (3) broadband acoustic (two underwater speakers), (4) both acoustic and electric in combination, and (5) solely the boat with no added stimulus (control variable). Results suggest the combination of acoustic and electric was three to four times more effective than the other techniques and repeating the herding application once more was important to further increase effectiveness. The synergy of acoustic and electric stimuli is likely advantageous to herding bigheaded carps because the acoustic stimulus alerts fish in the range of hundreds of meters from the source and deterrence is reinforced in the electrical field as the boat approaches.

We have utilized herding to manage bigheaded carps in several habitat types with the intended goal of either removal or deterrence. For example, we used herding to clear bigheaded carp out of a lock and dam chamber in coordination with the Army Corps of Engineers so it could be drained and repaired without costly delays related to handling fish. In terms of removal, large beach seins (500–2000 ft long) are generally the favorable gear type, but seining is site dependent and limited to specific environmental characteristics (i.e., zero flow, cleared of snags, and a gradual slopping shore). In contrast, large trap gears are versatile and could be advantageous to incrementally remove manageable numbers of fish rather than pulling in several thousands of pounds in a single beach seine haul. Our preliminary research suggests actively herding bigheaded carp into large trap nets (i.e., iruka net, merwin net, and pound net) is not efficient as fish had difficulty choosing to swim through trap net throats. However, bigheaded carp were receptive to capture after herding had completed and trap nets were left in place to fish passively. 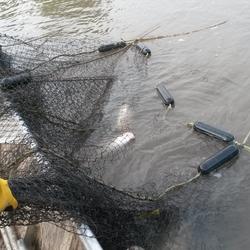 Development and Evaluation of Novel Capture Gears for Bigheaded Carps

Development and Evaluation of Novel Capture Gears for Bigheaded Carps

Mass removal of Silver Carp Hypophthalmichthys molitrix and Bighead Carp Hypophthalmichthys nobilis, hereafter referred to as bigheaded carps, is a primary management action to contain the population growth and reduce upstream dispersal. The use of passive trap nets to harvest bigheaded carps may effectively supplement active capture techniques. The USGS is working with partner agencies to develop...
Learn More
link 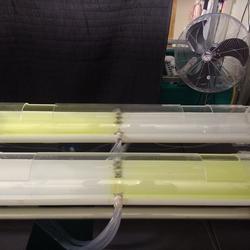 Silver Carp Hypophthalmichthys molitrix and Bighead Carp Hypophthalmichthys nobilis, hereafter referred to as bigheaded carps, are rapidly expanding their range. Federal agencies and the Illinois Department of Natural Resources are focused on keeping invasive carps out of the Great Lakes. The development of an effective attractant may assist managers with capturing carps in low-density areas such...
By
Columbia Environmental Research Center
link
September 13, 2018

Silver Carp Hypophthalmichthys molitrix and Bighead Carp Hypophthalmichthys nobilis, hereafter referred to as bigheaded carps, are rapidly expanding their range. Federal agencies and the Illinois Department of Natural Resources are focused on keeping invasive carps out of the Great Lakes. The development of an effective attractant may assist managers with capturing carps in low-density areas such...
Learn More
link 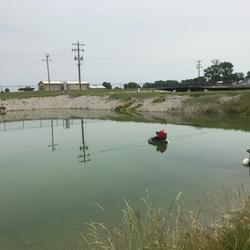 Assessment of Acoustic Stimuli for Manipulating Movement of Bigheaded Carps

Assessment of Acoustic Stimuli for Manipulating Movement of Bigheaded Carps

An assessment of fish herding techniques: Management implications for mass removal and control of silver carp

We assessed the effectiveness of herding techniques on adult Silver Carp Hypophthalmichthys molitrix in a tributary to the Missouri River. Sites (600 m) were contained using block nets and treated with one of five herding techniques: (1) a method commonly used by commercial fishers in the United States (commercial technique), (2) pulsed-DC electrofishing (electric technique), (3) broadband sound a
By
Ecosystems, Columbia Environmental Research Center
February 6, 2020

The use of hydroacoustic techniques is increasing as scientists search for less invasive ways to monitor fish populations, and using recreational side‐scan sonar (SSS) imagery for monitoring has become more common in aquatic resource management over the last 15 years due in part to its low cost and user‐friendly interface. The time‐consuming nature of manually counting fish targets has limited the
By
Ecosystems, Columbia Environmental Research Center