Research teams at the USGS Earth Resources Observation and Science (EROS) Center have released a satellite-derived dataset that maps the recent history of the fire-fueling invasive annual grasses spreading through the Western U.S. in greater detail than ever before.

Taken together with biannual estimates of invasive grass prevalence, released by EROS each May and July, the species-specific maps offer even deeper insight into the trajectory of landscape change across dry landscapes made vulnerable to disruption by years of drought and more frequent wildfires.

“The west is unique in the United States in that these areas are so arid and undergoing rapid change,” said USGS EROS scientist Stephen Boyte, who leads the project. “The work that we do helps, in some small way, to help people to understand the dynamics of this part of the country.”

The new datasets map invasives like cheatgrass and Medusahead from 2016-2020 at 30-meter resolution, meaning each pixel is approximately a quarter of an acre in size. The maps also break out species like Sandberg bluegrass, one of the native perennial bunchgrasses that land managers and ranchers would hope to preserve and restore. A peer-reviewed paper outlining the approach was published in February 2022.

The USGS EROS maps began to gain traction in the user community even before the most recent release. Matt Reeves of the USDA Forest Service, for example, has folded the information into a tool called “Fuelcast,” which calculates biomass each month across the West.

The Fuelcast calculations, which consider precipitation, temperatures and remotely sensed sources, serve two primary purposes. First, they offer a data point for ranchers seeking federal payouts for reductions in expected forage through the Farm Services Agency. Second, the projections help the firefighting community understand the conditions on the ground. High levels of biomass and dry conditions can be a dangerous combination if a fire is sparked.

Before the USGS EROS data emerged, Fuelcast was unable to differentiate between the invasive grasses Reeves calls “the gasoline” for fuel beds that might not burn as intensely without their influence.

The Audubon Society has also found a use for the exotic annuals data. Jon Belak of National Audubon’s Clean Energy Initiative added them to a multi-layered tool built to help Audubon understand priority bird and habitat values on the ground at proposed large-scale energy projects in the Pacific Northwest.

“The focus is to allow people at Audubon Washington, including the state office and local chapters—a lot of whom are volunteers and just everyday people who don’t have access to a geographic information system—to screen projects potential impacts to birds and their habitat, empowering them to engage in proactive conversations with developers and permitting authorities,” Belak said.

USGS Sagebrush Ecosystems Coordinator Lief Wiechman works to coordinate the Survey’s research efforts collaboratively with the Bureau of Land Management (BLM) and the U.S. Fish and Wildlife Service (FWS). The program’s support of the USGS EROS exotic annual grasses work signals recognition of the importance of the invasive species issue to multiple agencies and stakeholders in the west, where the BLM manages more than half of the 165 million acres in the sagebrush biome.

Large, catastrophic fires in the sagebrush biome used to occur every 100 to 400 years, Wiechman said. Today, thanks to what invasive species have done to the native fire cycle over the past few decades, “fires are increasing in size, intensity, and frequency.”

“These datasets are a really powerful tool because this is kind of closest thing to a snapshot in time we have to help the BLM make management decisions related to restoration actions and fire planning,” Wiechman said.

Previous mapping efforts at USGS EROS lacked the species specificity of the 2021 releases. Around 90% of the western rangelands tagged as “invasive” in 2020 was covered by cheatgrass, which left open some questions about the prevalence of species like Medusahead, a species gaining a foothold in some parts of the west.

Knowing which species are growing where has implications for potential fire behavior and for rangeland management, as each species differs in its potential impact during fire season and in its potential value as forage. Medusahead isn’t especially useful as forage for livestock, for example, whereas cheatgrass can be grazed early in the year.

“This new dataset gives land managers new information so they can have a better understanding of what’s going on,” said Devendra Dahal, a contractor at USGS EROS who works alongside Boyte. “Previously when we were doing annual herbaceous … the users were probably wondering which grasses they were looking at.”

The exotic annual grasses project has evolved and improved from the start. The maps released in December of 2021 are an outgrowth of work that began in 2015, when Boyte and former USGS EROS scientist Bruce Wylie collaborated on the first near-real time maps of cheatgrass extent for the west.

Those initial efforts had a 250-meter resolution—the highest possible for daily observations at that point. Data from USGS Landsat satellites have a 30-meter resolution, but are only available every 8- to 16 days, limiting their usefulness for mapping species that green up and brown down as quickly as cheatgrass.

But in late 2018, the team got early access to a NASA dataset called “Harmonized Landsat Sentinel (HLS),” which fused data from Landsat and the European Space Agency (ESA) Sentinel-2 satellites, which collect new data every 5-10 days. Between the two missions, the USGS EROS researchers had access to new observations from space every 2-3 days.

Higher-resolution data requires more computing horsepower to process and could have slowed down production significantly. Luckily, the arrival of HLS coincided the installation of a second high-performance computing (HPC) system at the EROS Center called Denali. Between that HPC system and one called Tallgrass, the data teams were able to deliver their first early season estimates at 30-meter resolution in 2020.

“Without Tallgrass and Denali, we would not have been able to produce the early estimates, because we were working on desktops before that,” Boyte said.

Those first few 30-meter maps didn’t offer much detail on specific grasses, however. Pinpointing the location of favored species like Sandberg bluegrass from space had been difficult in the past, Dahal said, since their spectral signatures and life cycles can be so similar to invasive annuals.

The team was able to overcome that limitation thanks to a newly robust pool of ground-level measurements collected by the Bureau of Land Management’s Assessment, Inventory, and Monitoring (AIM) program. The AIM plots—17,563 of which were used to produce the historical datasets—now include species-specific information. The remote sensing specialists used those plots to “train” their algorithms to identify grass types as they scanned the satellite data record.

“That gave us the ability to map those individual species,” Boyte said.

Research Ecologist Becky Kerns of the USDA Forest Service is among the scientists for whom species-specific information could be useful. Kerns works in the Blue Mountain Ecoregion of the Pacific Northwest, where she and her fellow researchers are working to understand the impact to dry forests of another invasive annual called

The open areas between forested lands in her study area were “almost unburnable” and served as fire breaks prior to invasion. Ventenata has changed that, and Kerns’ team is working to understand the spatial patterns of that emergence and to model its impact.

“We really wanted to do the wildfire modeling and bring in climate change, but in order to do that, we needed that spatial data,” Kerns said.

The initial versions of the USGS EROS maps didn’t extend into the Blue Mountain Ecoregion, but the latest versions do. Those improvements open new avenues for study, but their availability also helps tell the spatial story of invasive species on a more basic level.

“I think it’s hard for people to understand the scale of invasive species until they see maps. It’s hard to get out on the ground and see these things … but understanding where invasive species are, that’s the first thing land managers are going to want to know,” Kerns said.

The historical datasets from USGS EROS offer not only information on those individual species, but greater accuracy than the early season estimates, thanks to the longer record of observations upon which they’re based.

Ultimately, the new maps offer land managers and firefighters greater insight into the makeup of the landscapes relied upon by farmers and ranchers, as well as by at-risk species such as the greater sage-grouse.

The researchers are now exploring the possibility of moving their processes into the commercial cloud, an environment even more efficient than the HPC systems currently used, pulling HLS from NASA’s EROS-based Land Processes Distributed Active Archive Center (LP DAAC).

That, in turn, could make it possible, to double the number of near-real time estimates available to land managers in the west each year.

“We’re always looking to improve what we have been doing with these grasses,” Dahal said. “Science is all about continuous improvement.”

Follow the links below to learn more about exotic annual grass products from the USGS EROS Center. 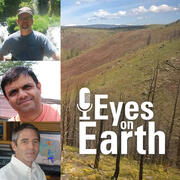 Eyes on Earth is a podcast on remote sensing, Earth observation, land change and science, brought to you by the USGS Earth Resources Observation and Science (EROS) Center. In this episode, we hear about the value of mapping fire-fueling invasive grasses in the Western U.S.
Learn More

Read more about the evolution of exotic annual grass maps at USGS EROS.

The conception of an invasive species in popular culture is generally tied to living things more mobile than cheatgrass – think zebra mussels in the...