The desert Southwest is experiencing rapid development of utility-scale solar and wind energy facilities. Although clean renewable energy has environmental benefits, it can also have negative impacts on wildlife and their habitats. Understanding those impacts and effectively mitigating them is a major goal of industry and resource managers. One species of particular concern is Agassiz’s desert tortoise (Gopherus agassizii), a threatened species under the Endangered Species Act. Tortoises are declining throughout their range in the Mojave and Sonoran Deserts and resource managers need information on how best to manage for healthy tortoise populations. Threats to their recovery include road mortality; habitat destruction, including from energy development; disease and predators; and climate change. I have been studying the ecology and behavior of a desert tortoise population in an operating wind farm since 1995. The wind farm was permitted and developed after 1983. The overarching focus of this research was to determine how desert tortoise ecology and behavior at the site differ from tortoise populations living in more natural environments.

Resource managers in the desert Southwest are challenged with trying to recover declining populations of the threatened Agassiz’s desert tortoise at the same time that large renewable energy projects are being permitted, developed and operated in desert tortoise habitat. To date, research conducted by the U.S. Geological Survey scientists represents the only body of published scientific literature on the effects of wind energy operation on desert tortoise ecology, behavior and survival. The information generated from this research allows resource managers to make informed decisions on project siting, design and mitigation strategies.

Live tortoises are marked with unique and permanent notches on their shell that allow researchers to identify individuals at subsequent captures to measure growth, movements, etc. Individual tortoises are measured, weighed and sex is determined by examining shell shape and tail size. A small sample of tortoise are outfitted with radio transmitters that allow scientists to find them on subsequent visits to the field site. Adult female tortoises are X-rayed to determine clutch size, clutch frequency (they produce up to three clutches per female per year at the Mesa wind farm) and egg width. Previous published research by the Principal Investigator determined that this technique poses minimal risk to females and embryos. Small blood samples are occasionally taken to obtain DNA used to compare genetic differences between populations. In addition, wildlife “trail cameras” were used in 2013 to observe tortoise behavior and document use of tortoise burrows by other species.

Research in the 1990s suggested that tortoises occupied virtually all areas of the wind farm including those in proximity to turbines and roads. In fact, tortoise burrows were often constructed in proximity to some of these features. Over time, accumulation of thousands of capture points and tortoise burrow locations now suggests that tortoises generally avoid the areas of greatest road and turbine concentration. It is important to note that the effects of site operation and maintenance do not affect all species the same. The deaths of two golden eagles were documented due to collisions with turbines at that time. Tortoise mortality has resulted from site effects including a tortoise that was entombed in a culvert under a road during a rain event, a road-killed female tortoise with eggs, and a tortoise killed by a fire. While that particular fire was unrelated to site activities, turbine-induced fires were a frequent occurrence at the site and remain a threat to tortoises as shown by burn injuries on adult tortoises.

Tortoises at the wind farm have high reproductive output due to the location of the site. It is situated on the edge of the desert where winter rain that affects the abundance of tortoise food plants is more reliable. Females at the site produce more eggs per year (up to 15) than any other desert tortoise population known. They can produce up to three clutches per year with an average of about four eggs per clutch. Some females exhibit nest-guarding behavior at the site. Hatching success of eggs was over 65% after accounting for losses due to infertility, predators and other effects. Overall, growth, population structure and survivorship were not different when comparing Mesa tortoises to populations living in more natural environments.

Unfortunately, it is still unclear if wind farm development and operation is compatible with recovery of threatened populations of desert tortoises. The protected nature of the site does convey an advantage to the tortoises living there, but mortality has occurred due to site operation.

Although this research project spans almost 20 years as of the last year of study (2013), results have to be placed in the context of the population dynamics of a species that takes 14+ years to reach sexual maturity and can live over 50 years. Research has just covered a single generation of this population of tortoises. Also, evidence to date suggests that many of the tortoises at the site are old individuals and evidence of younger tortoises growing into the adult population is extremely limited. The long-term fate of this tortoise population will require additional monitoring and research. 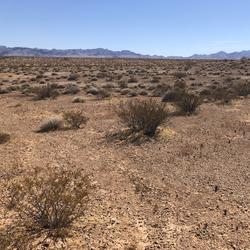 The United States is developing renewable energy resources, especially solar, at a rapid rate. Although renewable energy development is widely perceived by the public as “green technology,” construction, operation, maintenance, and eventual decommissioning of facilities all have known and potential negative impacts to natural resources, including plant communities and wildlife. This is especially...
By
Ecosystems, Species Management Research Program, Southwest Biological Science Center
link
June 16, 2021

The United States is developing renewable energy resources, especially solar, at a rapid rate. Although renewable energy development is widely perceived by the public as “green technology,” construction, operation, maintenance, and eventual decommissioning of facilities all have known and potential negative impacts to natural resources, including plant communities and wildlife. This is especially...
Learn More
link 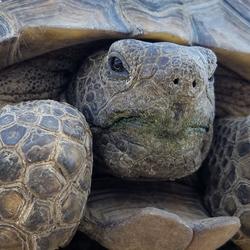 Agassiz’s desert tortoises (Gopherus agassizii) approach the southern edge of their mostly Mojave Desert range near Joshua Tree National Park. Modern desert tortoise research started in the Park in 1978 when the first tortoise population census was conducted on a one square mile area in the Pinto Basin known as the “Barrow Plot.” U.S. Geological Survey research began at the plot in 1997 and...
By
Species Management Research Program, Southwest Biological Science Center
link
December 5, 2016

Agassiz’s desert tortoises (Gopherus agassizii) approach the southern edge of their mostly Mojave Desert range near Joshua Tree National Park. Modern desert tortoise research started in the Park in 1978 when the first tortoise population census was conducted on a one square mile area in the Pinto Basin known as the “Barrow Plot.” U.S. Geological Survey research began at the plot in 1997 and...
Learn More

Below are associated publications.

Birds not in flight: Using camera traps to observe ground use of birds at a wind-energy facility

Context: Camera trapping is increasingly used to collect information on wildlife occurrence and behaviour remotely. Not only does the technique provide insights into habitat use by species of interest, it also gathers information on non-target species.Aims: We implemented ground-based camera trapping to investigate the behaviours of ground-dwelling birds, a technique that has largely been unutilis
By
Ecosystems, Southwest Biological Science Center
March 11, 2021

Little has been published regarding the burrowing habits of Agassiz’s desert tortoises (Gopherus agassizii) in the Sonoran Desert of California. We monitored the interactions of tortoises with their burrows, and other tortoises, via radio-telemetry at two nearby sites between the Cottonwood and Orocopia Mountains, from 2015-2018. We examined how annual cycles of drought and non-drought years, beha

Refining genetic boundaries for Agassiz’s desert tortoise (Gopherus agassizii) in the western Sonoran Desert: The influence of the Coachella Valley on gene flow among populations in southern California

Understanding the influence of geographic features on the evolutionary history and population structure of a species can assist wildlife managers in delimiting genetic units (GUs) for conservation and management. Landscape features including mountains, low elevation depressions, and even roads can influence connectivity and gene flow among Agassiz’s desert tortoise (Gopherus agassizii) populations
By
Ecosystems, Southwest Biological Science Center
June 26, 2020

Despite the trade-offs between renewable energy development, land use, humans, and wildlife, wind and solar development continues to transform the southwestern US into a green energy landscape. While renewable energy reduces carbon emissions and reliance on fossil fuels, many studies have emerged on the associated ecological and social impacts of this technology. Here, we review the current state
By
Ecosystems, Energy & Wildlife (unpublished), Southwest Biological Science Center
September 29, 2019

Electricity from wind energy is a major contributor to the strategy to reduce greenhouse gas emissions from fossil fuel use and thus reduce the negative impacts of climate change. Wind energy, like all power sources, can have adverse impacts on wildlife. After nearly 25 years of focused research, these impacts are much better understood, although uncertainty remains. In this report, we summarize p
By
Species Management Research Program, Geosciences and Environmental Change Science Center
November 14, 2018

Wind turbine-induced fires at a wind energy facility in California, USA, provided an opportunity to study the before and after effects of fire on a population of protected Agassiz’s desert tortoises (Gopherus agassizii) in the Sonoran Desert, a species and ecosystem poorly adapted to fire. We compared annual activity areas (AAs) of tortoises in 2011 and 2013, before and after two 2012 fires, with
By
Ecosystems, Southwest Biological Science Center
October 3, 2017

Renewable energy development is an arena where ecological, political, and socioeconomic values collide. Advances in renewable energy will incur steep environmental costs to landscapes in which facilities are constructed and operated. Scientists – including those from academia, industry, and government agencies – have only recently begun to quantify trade-offs in this arena, often using ground-moun
By
Species Management Research Program, Western Geographic Science Center
September 7, 2017

Mammalian mesocarnivore visitation at tortoise burrows in a wind farm

There is little information on predator–prey interactions in wind energy landscapes in North America, especially among terrestrial vertebrates. Here, we evaluated how proximity to roads and wind turbines affect mesocarnivore visitation with desert tortoises (Gopherus agassizii) and their burrows in a wind energy landscape. In 2013, we placed motion-sensor cameras facing the entrances of 46 active
By
Ecosystems, Species Management Research Program, Southwest Biological Science Center
May 1, 2017

Agassiz’s desert tortoise (Gopherus agassizii) is a conservation-reliant species with populations north and west of the Colorado River protected as threatened under the Endangered Species Act (Averill-Murray et al. 2012). Since it was listed under this category in 1990, a great deal has been learned about the natural history of the species, and it is now one of the best-studied turtles in the Unit
By
Ecosystems, Southwest Biological Science Center
April 25, 2017

Summary – We reviewed all the peer-reviewed scientific publications we could find on the known and potential effects of wind farm development, operation, maintenance, and decommissioning on reptiles and amphibians (collectively herpetofauna) worldwide. Both groups are declining globally due to a multitude of threats including energy development. Effect studies were limited to the long-term researc
By
Ecosystems, Energy & Wildlife (unpublished), Southwest Biological Science Center
January 1, 2017

This report summarizes the results for mtDNA and STR genotyping of 41 desert tortoise (Gopherus agassizii) DNA samples from opposite sides of the Coachella Valley: one sample from the west side at the Mesa wind energy facility in the Whitewater Hills and the other from the mouth of Cottonwood Canyon in Joshua Tree National Park, both within the boundaries of the Coachella Valley Multiple Species H
By
Ecosystems, Southwest Biological Science Center
link
February 8, 2022

Birds Use Tortoise Burrows, Too

Remote camera monitoring allows us to see wildlife behavior without disturbance. Instead of from a 'bird's eye view,' this study approaches...

Desert Tortoises in the News

Research on desert tortoises has received some press in Popular Science and the LA Times. SBSC scientists and their collaborators have been studying...

How a wind energy facility is designed can influence the behavior of animal predators and their prey, according to a recent study published in The...