Hurricane Sandy made landfall on October 30, 2012, and impacted a long swath of the Mid-Atlantic coastline. Many areas that had been hit by Hurricane Irene in August 2011 were again battered by strong waves and surge. The barrier islands were breached in a number of places and erosion of the beach and dunes occurred all along the Mid-Atlantic coast.

As Hurricane Sandy moved northward along the U.S. Atlantic coast in October 2012, U.S. Geological Survey scientists worked to determine where and how the storm's waves and surge might dramatically reshape the beaches and dunes that stand between the storm and coastal developments. Through a complex modeling process that uses coastal elevations, wave forecasts, and potential storm surge, they predicted coastal change hazards, such as shoreline and dune erosion, that might be expected during a Sandy landfall.

Following landfall, oblique aerial photography and lidar surveys of beach elevations were used to document the changes that occurred as a result of the storm. In addition, field measurements of the beaches and dunes were collected immediately after the storm. Comparisons of data collected before the storm show the nature, magnitude and spatial variability of the coastal response. These data will be used to further refine predictive models for storm-induced erosion.

All of the pre- and post-storm photos for Hurricane Sandy are available in the Oblique Aerial Photography Viewer.

As Hurricane Sandy moved up the eastern U.S. coast and the forecasts were predicting significant impacts to the south shore of Long Island, a field team went to Fire Island on the south shore of Long Island, New York, to survey the beach, dunes and shoreline. The pre-storm survey was conducted on October 28, 2012. Following the storm, surveys were conducted over several days (November 1 and 2, 2012) to measure beach and dune erosion.

The impacts to the island were extensive. The majority of oceanfront homes in the communities within Fire Island National Seashore were damaged or destroyed. Enormous volumes of sand were carried from the beach and dunes to the central portion of the island, forming large overwash deposits, and the island was breached in 3 locations. With few exceptions, lower-relief dunes were overwashed and flattened. High dunes, which are more commonly found within undeveloped portions of the island, experienced severe erosion and overwash. The elevation of the beach was lowered and the dunes form vertical scarps where they survived.

Some key findings of the field data collection effort indicate that:

The USGS worked closely with personnel from the National Park Service (NPS) to gain access to the island, and to survey and measure the dramatic changes to the barrier system. The post-storm data was used to help the NPS assess the areas of the coast that were most vulnerable to a nor'easter that impacted the coast a week after Sandy. 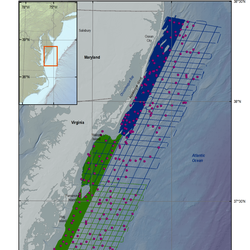 The Delmarva Peninsula is a 220-kilometer-long headland, spit, and barrier island complex that was significantly affected by Hurricane Sandy. In order to better constrain controls on coastal vulnerability and evolution, the region’s sediment sources, transport pathways and sediment sinks must be identified. This project defines the geologic framework of the Delmarva coastal system through...
By
Natural Hazards, Coastal and Marine Hazards and Resources Program, Woods Hole Coastal and Marine Science Center
link
December 28, 2018

The Delmarva Peninsula is a 220-kilometer-long headland, spit, and barrier island complex that was significantly affected by Hurricane Sandy. In order to better constrain controls on coastal vulnerability and evolution, the region’s sediment sources, transport pathways and sediment sinks must be identified. This project defines the geologic framework of the Delmarva coastal system through...
Learn More
link 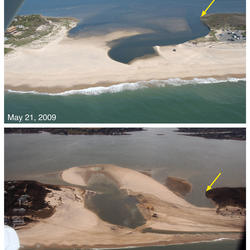 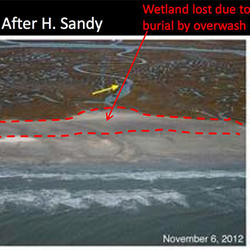 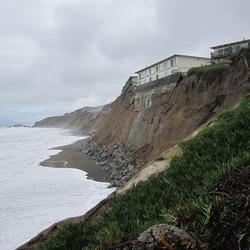 Research to identify areas that are most vulnerable to coastal change hazards including beach and dune erosion, long-term shoreline change, and sea-level rise.
Learn More

Models of dune erosion depend on a set of assumptions that dictate the predicted evolution of dunes throughout the duration of a storm. Lidar observations made before and after Hurricane Sandy at over 800 profiles with diverse dune elevations, widths, and volumes are used to quantify specific dune erosion model parameters including the dune face slope, which controls dune avalanching, and the traj
By
St. Petersburg Coastal and Marine Science Center
September 21, 2015

Beaches serve as a natural buffer between the ocean and inland communities, ecosystems, and natural resources. However, these dynamic environments move and change in response to winds, waves, and currents. During extreme storms, changes to beaches can be great, and the results are sometimes catastrophic. Lives may be lost, communities destroyed, and millions of dollars spent on rebuilding. During
By
St. Petersburg Coastal and Marine Science Center
May 1, 2015

In response to the forecasted impact of Hurricane Sandy, which made landfall on October 29, 2012, the U.S. Geological Survey (USGS) began a substantial data-collection effort to assess the morphological impacts to the beach and dune system at Fire Island, New York. Global positioning system (GPS) field surveys of the beach and dunes were conducted just prior to and after landfall and these data we
By
St. Petersburg Coastal and Marine Science Center
April 28, 2015

The U.S. Geological Survey (USGS) conducts baseline and storm response photography missions to document and understand the changes in vulnerability of the Nation's coasts to extreme storms. The remnants of Tropical Storm Ida intensified to become a nor'easter (herein referred to as Nor'Ida). On December 4, 2009, the USGS conducted an oblique aerial photographic survey from Ocean City, Maryland, to
By
St. Petersburg Coastal and Marine Science Center
September 19, 2014

Hurricane Sandy, the largest Atlantic hurricane on record, made landfall on October 29, 2012, and impacted a long swath of the U.S. Atlantic coastline. The barrier islands were breached in a number of places and beach and dune erosion occurred along most of the Mid-Atlantic coast. As a part of the National Assessment of Coastal Change Hazards project, the U.S. Geological Survey collected post-Hurr
By
St. Petersburg Coastal and Marine Science Center

Obique photos offer a unique perspective of the coast. Features such as beach erosion or accretion, dune erosion and overwash can all be clearly characterized in this imagery. It also documents coastal infrastructure, as well as the damage that infrastructure may incur as the result of an impacting hurricane.