The longest-serving satellite in the Landsat fleet launched on March 1, 1984, carrying both a Multispectral Scanner (MSS) and Thematic Mapper (TM).

Landsat 5 was the last of the originally mandated Landsat satellites, designed and built alongside Landsat 4.

After launch, the satellite went on to collect imagery for nearly 29 years—far longer than its three-year life expectancy—earning a world record for longest-operating Earth observation satellite.

Near the start of its service, Landsat 5 captured the first civilian satellite observations of the 1986 Chernobyl nuclear disaster. It recorded land surface evidence of devastation of the 2004 tsunami in the Indian Ocean. Near the end, it acquired imagery of the 2010 Deepwater Horizon oil spill in the Gulf of Mexico.

Indeed, the satellite documented nearly every major land surface event since March 1984, including droughts, floods, volcanic eruptions, the clearing of rainforests, the greening of agricultural fields, and the influence of a human population that grew from less than 5 billion to over 7 billion.

Landsat 5 was decommissioned on June 5, 2013, having orbited the Earth more than 150,000 times and collected more than 2.5 million images of its surface.

Visit the full Landsat 5 page on the Landsat Missions website. 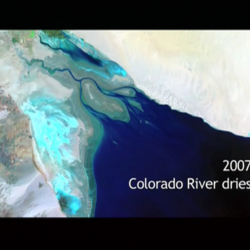 A video celebrating the 25th Anniversary of Landsat 5.