Dorian Will Likely Cause Some Erosion to Va., Md. Beaches

To learn more about USGS’ role providing science to decision makers before, during and after Hurricane Dorian, visit the USGS Hurricane Dorian page at www.usgs.gov/dorian.

Coastal change experts with the U.S. Geological Survey have released a new forecast showing about 34 percent of the beaches and dunes in Virginia, and 2 percent in Maryland are very likely to experience some level of erosion from Hurricane Dorian’s strong waves and surge

Dune erosion is only the first level of coastal change a storm like Dorian can cause. As waves and surge reach higher than the tops of dunes, overwash can occur, often transporting large amounts of sand across coastal environments, depositing sand inland and causing significant changes to the landscape. Overwash is currently predicted as very likely for 6 percent of Virginia dunes. Maryland dunes are not forecast to overwash.

Inundation, the most severe coastal impact, occurs when beaches and dunes are completely and continuously submerged by water. Inundation is not forecast for any of the dunes in these states.

Experts also looked at Dorian’s potential coastal impacts to Delaware and none are forecast.

The prediction of Dorian’s effects are based on the results of the USGS Coastal Change Forecast model, which has been in use since 2011, and is continually being improved. The Coastal Change Forecast model starts with the National Hurricane Center’s storm surge predictions and National Oceanic and Atmospheric Administration wave forecast models as input. The USGS model then adds detailed information about the forecast region’s beach slope and dune height to predict how high waves and surge will move up the beach, and whether the protective dunes will be overtopped. The forecasts are available at high resolution for all the areas likely to be affected by storm-tides from Hurricane Dorian.

The public can view a real-time map of these coastal change forecasts on the USGS’ Coastal Change Hazards Portal. Emergency managers can use the coastal change forecast to help identify locations where coastal impacts might be the most severe and this data can assist them as they make critical decisions on which areas to evacuate, which roads to use, and where to position heavy equipment for post-storm clean-up.

While there are many factors at play to explain the disparity between the projected erosion levels of Virginia beaches compared to Maryland and Delaware beaches, topography plays an important role.

“The bases of Maryland and Delaware dunes sit higher above ocean levels than the base of Virginia dunes,” said research oceanographer Kara Doran, leader of the USGS Coastal Change Hazards Storm Team. “Additionally, the Maryland and Delaware dunes are also generally taller than Virginia dunes. This is important, because the increased elevation of the base of the dunes reduces the amount of time strong waves and surge can impact and erode them, and the taller height of the dunes requires higher surge levels before they are overtopped.”

While the final projections for Hurricane Dorian will continue to change, the storm is forecast to remain a hurricane through Saturday night as it heads toward the north Atlantic. 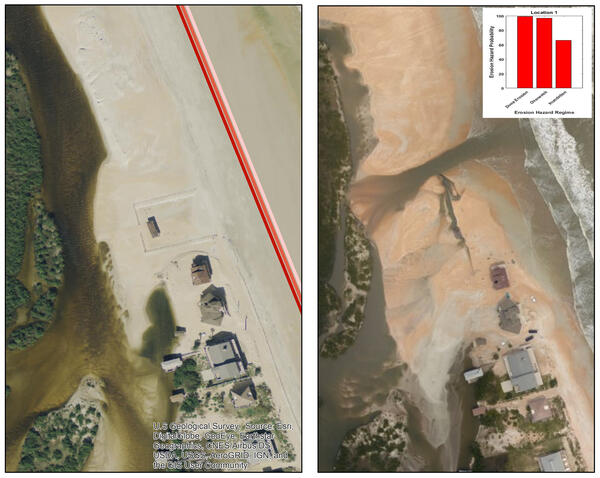 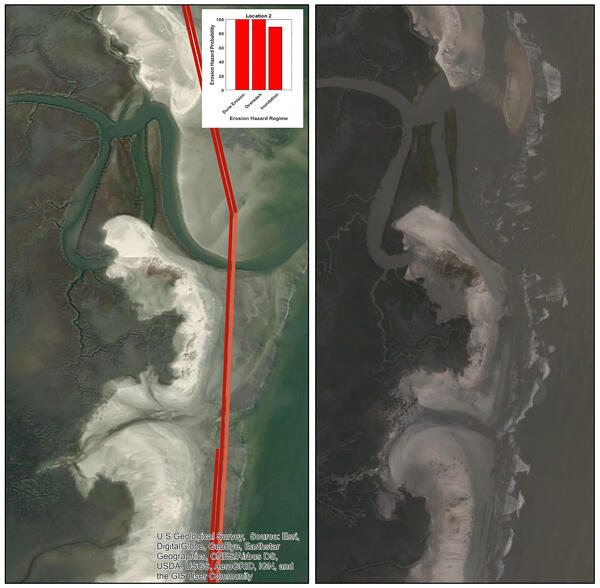 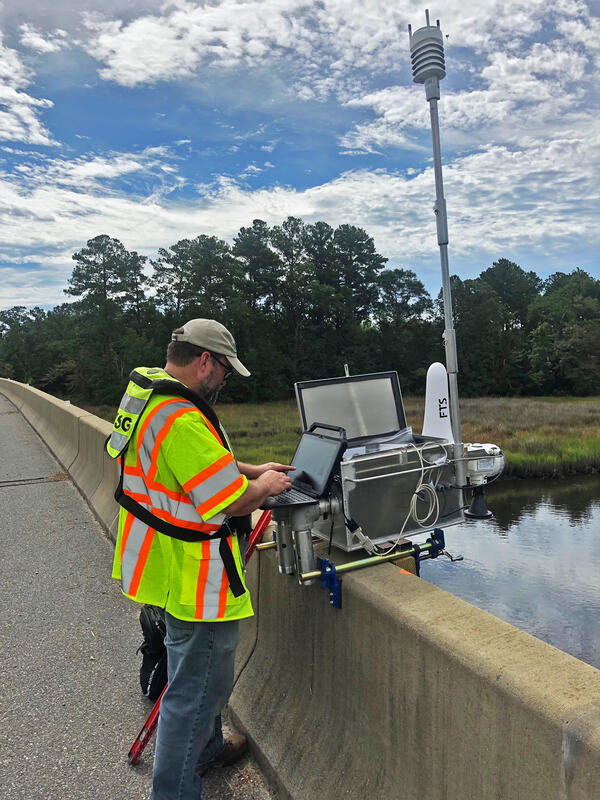 Editor’s Note: This story was revised Sept. 10, 2019 to include the later phases of USGS’ response to Hurricane Dorian.

To learn more about USGS’ role...