To mark the 30th anniversary of a Southern California earthquake, we’ll note why it was significant and listen to USGS employees share their own quake tales.

Just before 5 am on a Sunday in late June, a magnitude 7.3 earthquake hit Southern California, rupturing a 53 mile (85 kilometer)-long gash through the Mojave Desert. It was the largest quake to strike the lower half of the state in 40 years and was felt as far away as Sacramento and Mexico.

Dubbed the Landers earthquake, after the small San Bernardino County town close to the epicenter, the quake occurred on June 28, 1992, marking its 30th anniversary this year.

“The Landers earthquake didn’t just change the desert landscape, it changed earthquake science,” Susan Hough, a USGS research geophysicist, said. The quake showed scientists that large earthquakes along one fault can trigger shaking on another fault.

“Once a rupture gets going, it can jump from one fault to another, even if the faults are as much as 3 miles (5 km) apart from each other,” Hough said.

The Landers earthquake was also the beginning of a period of heightened earthquake activity within the Eastern California Shear Zone, which sits east of the San Andreas fault, and includes many individual faults from east of the Sierra Nevada through the Mojave Desert to Palm Springs. Some of the strongest earthquakes ever felt or recorded in California, like the Landers quake, took place in this zone.

To understand what happened in Landers on June 28, it’s important to travel back in time a few months to April 22.

Just before 10 pm on a cool Wednesday night, people in Los Angeles felt a relatively small but prolonged shaking. Scientists in the area quickly realized that the minutes-long duration and low intensity meant that a moderately large quake had struck somewhere nearby. But where?

USGS and university scientists rushed to respond to the tremor using data from the (then called) Southern California Seismic Network, which indicated a location in the desert north of Palm Springs.

Residents near the epicenter, just over 120 miles (193 km) from Los Angeles, experienced a jolt strong enough to topple objects from shelves and cause minor building damage.

Although the quake, called the Joshua Tree earthquake, had a magnitude of 6.1, which was relatively small and limited in impact, it caught the attention of the earthquake science community because of its proximity to the San Andreas fault, which cuts northwestward through the Coachella Valley north of Palm Springs.

Teams of scientists and field technicians from the USGS and several academic institutions deployed portable seismometers to support the permanent network and record the Joshua Tree quake’s aftershocks. Over the months that followed the April tremor, the instruments recorded thousands of aftershocks.

By late June, the sequence had tapered off and researchers had retrieved most of the portable instruments. However, the ones that remained recorded a small burst of aftershocks the night of June 27, 1992, continuing through the early morning of June 28.

At 5:57 am local time on June 28, residents in Landers felt a strong jolt that toppled a fireplace, killing a child, and injured approximately 400 people in the surrounding area. The desert communities of Landers, Yucca Valley, and Joshua Tree had considerable damage to buildings and roads, as well as water and power lines.

In the immediate aftermath of the Landers earthquake, geologists jumped into cars and planes to map out the extent of the earthquake, recognizing it to include parts of several faults that geologists had previously mapped as separate structures.

In order, you’ll hear from:

Scott Lydeen, an electronics technician with the USGS Earthquake Science Center based in the Pasadena, California office.

Susan Hough, a research geophysicist with the USGS Earthquake Science Center based in the Pasadena, California office.

Joan Gomberg, a research geophysicist with the USGS Earthquake Science Center based in the Seattle, Washington office.

Andrew Michael, a research geophysicist with the USGS Earthquake Science Center based in the Moffett Field, California office.

Ruth Harris, a research geophysicist with the USGS Earthquake Science Center based in the Moffett Field, California office.

Jonathan Matti, a research geologist with the USGS based in Arizona.

Teams of scientists traversed the desert to map the fault breaks, sweltering in the summer desert heat. For the first time, they used satellite data to map in detail how Earth’s surface had moved. “The bounty of traditional and novel data led to improved understanding of both fault and earthquake rupture complexity,” Hough said.

Researchers were able to more easily map the complicated Landers rupture because of its location in the desert. With little vegetation to hide evidence left behind by the quake, geologists were able to map the terrain in more detail on the ground and satellites were able to capture an unobstructed view from space.

“The Joshua Tree-Landers earthquakes gave researchers a deeper appreciation for the complexity of earthquake sequences,” Hough said. For instance, researchers learned more about how one quake can influence another.

Another realization was that large earthquakes can have large aftershocks, even some distance away from the mainshock. Around 3 hours after the Landers quake, a fault system 30 miles (48 kilometers) away near Big Bear experienced an aftershock. With a magnitude of 6.3 and a location closer to population centers, the impact of this aftershock rivaled that of the larger mainshock.

Another one of the triggered earthquakes happed 20 hours later in Nevada. Listen to Joan Gomberg talk about the magnitude 5.6 Little Skull Mountain earthquake, which happened 12 miles (20 km) from Yucca Mountain.

“Landers was unique because it was the first really large earthquake we had after we were building dense local seismic networks,” Michael said. “It was our first opportunity to observe this triggering phenomenon.”

In addition to the Big Bear quake, there were multiple small and even moderate earthquakes happening up to 770 miles (1250 km) away, starting immediately after the Landers earthquake.

The Landers mainshock happened near the southernmost extent of the Eastern California Shear Zone, which extends over 400 km long and measures 80 km wide. The Landers earthquake sequence formed a previously missing link that connects the Shear Zone to the southern San Andreas fault.

The Shear Zone has seen a lot of activity in the past few decades. On October 16, 1999, a magnitude 7.1 earthquake struck in a remote part of the Mojave Desert near the Hector Mine, approximately 40 miles (64 km) to the northeast of Landers. Then, in 2019, a pair of magnitude 6.5 and 7.1 earthquakes occurred near the town of Ridgecrest, about 130 miles (209 km) northwest of the Landers quake.

Although there isn’t a crystal ball for predicting earthquakes, we know that soon after a large earthquake within the Eastern California Shear Zone, there’s an increase in strain on the San Andreas fault, making an even bigger earthquake more likely.

In the year 1992, the idea of directly receiving a warning to take cover and prepare for shaking was still mostly a dream.

Doug Given, a USGS geophysicist, recalls his own experience with earthquake early warning before it was a thing. “My strongest memory was of standing at a console in the computer room looking at a live feed from the ISAIAH system. ISAIAH (Information on Seismic Activity In A Hurry) was an automatic earthquake analysis system I had developed that could produce locations and magnitudes within 30 seconds of earthquakes,” Given said.

On June 28, 1992, Given set up the ISAIAH output log to show aftershocks after the Landers mainshock. “By chance, I was watching about three hours after the Landers quake and saw the magnitude 6.5 Big Bear earthquake in the log several seconds before I felt the floor rolling in Pasadena,” Given said.

“This was an early demonstration that earthquake early warning worked, but that processing needed to speed up for it to be more useful.”

Given went on to become one of the pioneers of the USGS ShakeAlert® earthquake early warning system, which monitors for significant earthquakes and issues alerts via third party applications and wireless emergency alerts when strong shaking is imminently expected. The system is available to much of the West Coast, currently operational in California, Oregon, and Washington.

Did you feel it?

Any time after an earthquake, you can visit the USGS Did You Feel It website to record your experience.

You can still add your impressions on the 30-year-old Landers earthquake! 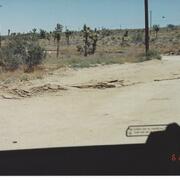 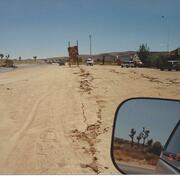 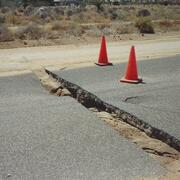 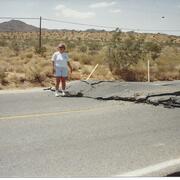 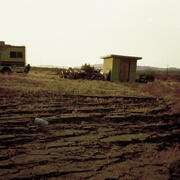 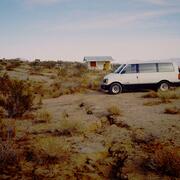 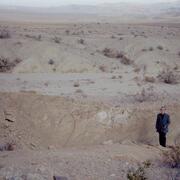 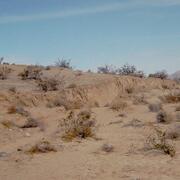 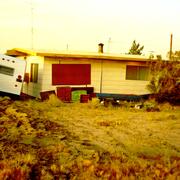 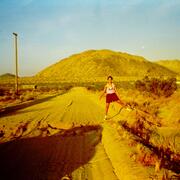 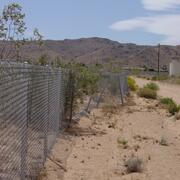 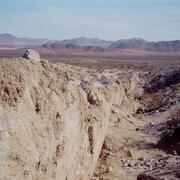 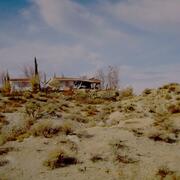 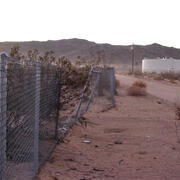 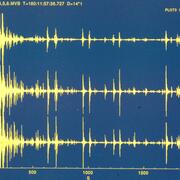 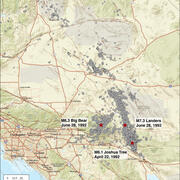 “The Landers earthquake, which had a moment magnitude (Mw) of 7.3, was the largest earthquake to strike the contiguous United States in 40 years. This earthquake resulted from the rupture of five major and many minor right-lateral faults near the southern end of the eastern California shear zone.” —Kerry Sieh et al., Science, v 260, issue 5105, 171-176.
By
Natural Hazards, Earthquake Hazards, Earthquake Science Center
link
May 26, 2022

“The Landers earthquake, which had a moment magnitude (Mw) of 7.3, was the largest earthquake to strike the contiguous United States in 40 years. This earthquake resulted from the rupture of five major and many minor right-lateral faults near the southern end of the eastern California shear zone.” —Kerry Sieh et al., Science, v 260, issue 5105, 171-176.
Learn More
link 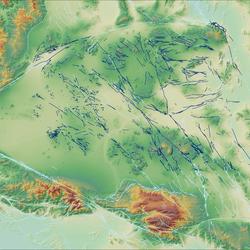