From 2011 to 2014, the Nation’s largest dam removal project to date took place in Washington State, allowing the Elwha River to once again flow unimpeded from its origin in the Olympic Mountains to the Strait of Juan de Fuca. Nearly 100 years of sediment (30 million tons) had accumulated behind two dams, and about two-thirds of that (20 million tons) was released, dramatically affecting the river channel, surrounding estuaries, beaches, and the river mouth. USGS expertise focused on understanding and measuring the physical and ecological impacts of dam removal and recovery of this river system alongside multiple partners: Olympic National Park, Lower Elwha Klallam Tribe, Bureau of Reclamation, Washington Department of Ecology, U.S. Fish and Wildlife Service, Environmental Protection Agency, National Ocean

The CMHRP’s diverse suite of data acquisition and analytical tools, as well as expertise, were utilized to assess the progress of the restoration project and to quickly adapt to changing circumstances. The CMHRP mapped the river mouth and seafloor before and after dam removal, and collected water and sediment samples to measure nutrients and other indicators of ecosystem health. Instruments placed on the seafloor near the river mouth measured current velocity, salinity, temperature, light levels, and the amount of sediment suspended in the water. Underwater cameras took photographs periodically to document the changing seafloor environment. Lidar technology recorded landscape changes resulting from the new sediment deposited along the river and the coast. Scuba divers surveyed marine life and habitats near the mouth of the river to evaluate the effects of the high sediment loads. 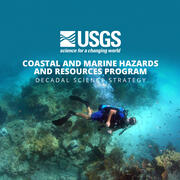 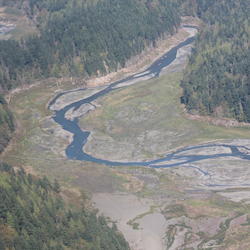 The Elwha River Restoration Project has reconnected the water, salmon, and sediment of a pristine river and coast of the Olympic Peninsula of Washington.
Learn More