Scientists refined an existing speciation model to identify key biogeochemical processes controlling dissolved uranium bioavailability to a freshwater snail. This information is important to advance current understanding and prediction of the ecological risk posed by uranium mining to freshwater ecosystems, including federally managed lands such as in the Grand Canyon area.

Growing demand for uranium (U) as an energy source has raised concerns about the ecological risks of U extraction and processing. A 20-year withdrawal of future U mining on Federal lands adjacent to Grand Canyon National Park was enacted by former Secretary Salazar to allow for research to address these concerns. An area of considerable uncertainty is the potential effects of U exposure on native terrestrial and aquatic organisms within the region.

Although U has long been recognized as a danger for living organisms, very little was known about the pathways U takes to enter the food web. In a series of laboratory experiments, scientists were able to characterize processes that control U uptake in freshwater snails (specifically, Lymnaea stagnalis, a test species that has been used extensively to study metal bioaccumulation and toxicity). In particular, they identified the forms of dissolved Upresent under different geochemical conditions that best predict bioavailability. U was determined to be bioavailable to the snails under all geochemical conditions tested; however, bioavailability was reduced at elevated pH, elevated hardness, and in the presence of dissolved organic matter. Scientists furthered the understanding about factors driving the changes in bioavailability by refining an existing U speciation model to include constants for selected forms of dissolved U (for example, ternary complexes such as U bound to both calcium and carbonate) and U binding to dissolved organic matter. Formation constants for these U forms are rarely considered in studies of U bioavailability. In contrast to previous published studies that relate speciation to bioavailability, scientists determined that reduced bioavailability of U in hard freshwaters may be explained by the abundance of selected forms of U (ternary complexes). These complexes can bind the majority of U in most natural freshwaters, including springs within and adjacent to the Grand Canyon withdrawal area.

The results underscore the importance of considering specific forms of dissolved U for estimating bioavailability in freshwater snails, especially the "protective" role of ternary U complexes against Ubioavailability and toxicity, as observed in humans chronically exposed to U. The model species is related to the endangered Kanab ambersnail (Oxyloma haydeni kanabensis), a species endemic to Grand Canyon National Park. These freshwater snails are herbivores that represent an initial, key step in the trophic transfer of contaminants through aquatic food webs. In order to fully understand the risk of U toxicity to living organisms, scientists need to understand how or if U compounds are taken up by aquatic organisms (for example, if they are taken up through diet or directly from the waters they live in). This study identified that ternary U complexes may be important in mitigating U bioavailability in hard, alkaline waters such as springs in Grand Canyon area. U uptake from water represents one exposure pathway for freshwater snails, but more detailed information is needed on uptake of U from food, which may be especially important for a primary consumer like Lymnaea stagnalis as well as the Kanab ambersnail. Collectively, information on the biogeochemical factors that affect aqueous and dietary U bioavailability will better characterize U exposure pathways and risk in freshwater ecosystems. 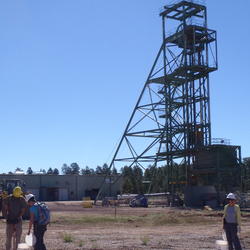 The Minerals Integrated Science Team focuses on contaminant exposures in the environment that might originate from mineral resource activities including, transportation, storage, extraction and waste management. Perceived health risks to humans and other organisms will be distinguished from actual risks, if any. If actual risks are identified this Team will inform how to economically and...
By
Ecosystems, Contaminant Biology, Environmental Health Program, Toxic Substances Hydrology
link
September 11, 2018

The Minerals Integrated Science Team focuses on contaminant exposures in the environment that might originate from mineral resource activities including, transportation, storage, extraction and waste management. Perceived health risks to humans and other organisms will be distinguished from actual risks, if any. If actual risks are identified this Team will inform how to economically and...
Learn More
link 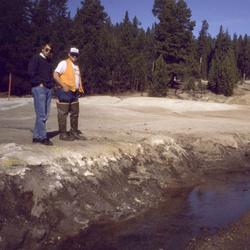 Since the late 1990s, the U.S. Geological Survey (USGS) has conducted an Abandoned Mine Lands (AML) Initiative. The initiative provides technical assistance to support actions by Federal Land Management Agencies in the U.S. Department of the Interior and the U.S. Department of Agriculture (USDA) to remediate contamination associated with abandoned hard-rock mining sites. Acid drainage and toxic...
Learn More

To gain insights into the risks associated with uranium (U) mining and processing, we investigated the biogeochemical controls of U bioavailability in the model freshwater speciesLymnaea stagnalis (Gastropoda). Bioavailability of dissolved U(VI) was characterized in controlled laboratory experiments over a range of water hardness, pH, and in the presence of complexing ligands in the form of dissol
By
Water Resources, Ecosystems, Toxic Substances Hydrology, Environmental Health Program, Colorado Water Science Center

Living Organisms Take Up Uranium from their Environment

To gain insights into the risks associated with uranium mining and processing, U.S. Geological Survey scientists are investigating how uranium moves...