A summary of recent and past landslides and debris flows caused by rainfall in Southern California.

Like the northern part of the state, southern California is well known to be susceptible to landslides (see Preliminary soil-slip susceptibility maps, southwestern California - Open-File Report 2003-17). Some are triggered by earthquakes, but more frequently landslides are caused by intense and/or prolonged rainfall. Some, but not all, of the major winter storms that have caused landslide fatalities and property damage in southern California have occurred during El Niño (1997-98 info) conditions.

These reports and maps can be used as examples of what may occur during the upcoming 2015-2016 El Niño season if heavy precipitation occurs.

Shallow landsides are generally less than (3-5 m) (10-15 ft) in depth and can transform into rapidly moving debris flows. Previous work at the USGS has identified both the areas of southwestern California most susceptible to shallow landslides and the rainfall conditions required to trigger slope failures. Maps displaying where shallow landslides are most likely to occur are based on observation of previous landslide activity, topographic slope, and information on the bedrock material (see Preliminary soil-slip susceptibility maps, southwestern California - Open-File Report 2003-17).

Shallow landslides can occur at any time during the winter, but are more likely happen when the ground is nearly saturated. In southern California, at least 25 cm (10 in) of rainfall during the winter is needed to nearly saturate the ground. After this point, a rain burst of 5-6 mm (0.2 to 0.25 in) in one hour has been observed to trigger abundant shallow landslides (see Landslides in Santa Monica Mountains and Vicinity - Prof Paper 851).

Deep-seated landslides are generally greater than 3-5 m (10-15 ft) deep. Deep-seated landslides can be triggered by deep infiltration of rainfall, which can take weeks or months to occur. Some move slowly, while others can move rapidly with little notice. The La Conchita landslide in Ventura County is an example of a deep-seated landslide that has experienced both styles of movement (see Landslide Hazards at La Conchita, California - Open-File Report 2015-1067). In 1995, after an exceptionally wet winter, the landslide moved tens of meters (tens of yards) damaging nine houses. In 2005, after a 15-day period of near-record rainfall, a larger area failed rapidly, remobilizing part of the 1995 slide. The catastrophic movement of the 2005 landslide damaged or destroyed 36 houses and killed 10 people.

In southern CA, the USGS has also identified the rainfall conditions required to trigger post-wildfire debris flows. NOAA uses this information to provide early warning for debris flows in areas affected by the fire.

Many areas of coastal California are subject to cliff erosion and coastal landslides (see new research on El Niño coastal hazards in California). Hazards from these types of landslides can occur both at the bottom of cliffs (from burial) and at the tops of cliffs (from falling over). During the winter season in California, beaches typically erode thereby allowing waves to reach further inland and to inundate the bottoms of coastal cliffs. Wave energy is also typically higher during the winter, and particularly during El Niño events, thereby exacerbating the potential for coastal erosion. Coastal cliff failures may also occur simply as a result of heightened precipitation as well – wave action makes cliffs inherently unstable, and rainfall may be the ultimate trigger for failure, even during times with little to no wave action.

During and just after storms, existing coastal landslides may become reactivated and seemingly stable coastal cliffs may erode and fail rapidly. Background rates of coastal cliff erosion are variable along the California coast (see National Assessment of Shoreline Change Part 4: Historical Coastal Cliff Retreat along the California Coast - Open File Report 2007-1133) and tied to the rock or soil strength of the cliffs among other factors, but these measurements of historic coastal cliff retreat provide indications of places most susceptible to coastal landslides. 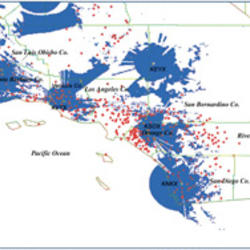 Wildfire can significantly alter the hydrologic response of a watershed to the extent that even modest rainstorms can produce dangerous flash floods and debris flows. In this report, empirical models are used to predict the probability and magnitude of debris-flow occurrence in response to a 10-year rainstorm for the 2013 Springs fire in Ventura County, California. Overall, the models predict a re
By
Natural Hazards, Landslide Hazards, Geologic Hazards Science Center
January 14, 2011

Overview of the ARkStorm scenario

Coastal cliff retreat, the landward migration of the cliff face, is a chronic problem along many rocky coastlines in the United States. As coastal populations continue to grow and community infrastructures are threatened by erosion, there is increased demand for accurate information regarding trends and rates of coastal cliff retreat. There is also a need for a comprehensive analysis of cliff retr
By
Natural Hazards, Coastal and Marine Hazards and Resources Program, Pacific Coastal and Marine Science Center
October 2, 2005

Wildland fires are inevitable in the western United States. Expansion of man-made developments into fire-prone wildlands has created situations where wildfires can destroy lives and property, as can the flooding and debris flows that are common in the aftermath of the fires. Fast-moving, highly destructive debris flows triggered by intense rainfall are one of the most dangerous post-fire hazards.
By
Natural Hazards, Landslide Hazards, Geologic Hazards Science Center
September 29, 2005

This group of maps shows relative susceptibility of hill slopes to the initiation sites of rainfall-triggered soil slip-debris flows in southwestern California. As such, the maps offer a partial answer to one part of the three parts necessary to predict the soil-slip/debris-flow process. A complete prediction of the process would include assessments of “where”, “when”, and “how big”. These maps em
By
Energy and Minerals, Energy Resources Program, Mineral Resources Program, National Laboratories Program, Science and Decisions Center, Groundwater and Streamflow Information Program, Geology, Minerals, Energy, and Geophysics Science Center
January 1, 1994