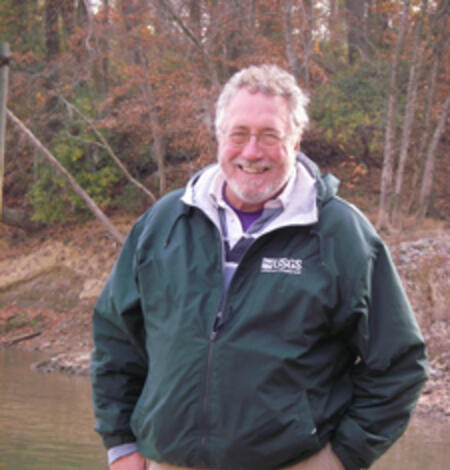 Cliff Hupp is a Scientist Emeritus at the Florence Bascom Geoscience Center.

Dr. Cliff R. Hupp is the Lead Scientist of the Vegetation and Hydrogeomorphology Project of the U.S. Geological Survey, National Research Program in Reston, Virginia, where he has been since 1978. Presently, he is the Research Advisor for the Geomorphology and Sediment Transport Group. He has investigated fluvial geomorphology and riparian vegetation ecology in relation to landforms and hydrologic processes for 35 years. Additional research includes studies on forested wetland biogeochemistry, channel evolution, floodplain processes and forms, sedimentation dynamics, and carbon sequestration in riparian ecosystems in the U.S. and Europe.

C.R. Hupp's background is in both plant ecology and fluvial geomorphology, and importantly the transition area(s) between these two fields. Specific areas include: vegetation patterns (species distribution) in the face of hydrogeomorphic form and process, dynamic equilibrium in fluvial (and occasionally hillslope) systems, sediment deposition and erosion in riparian areas (in channel and on floodplains), wetland hydrogeomorphic interactions with plant ecology, channel/riparian zone evolution, eco-hydrogeomorphic impacts from human alteration, organic material (carbon) dynamics in biogeochemical based studies, dendrogeomorphology, large wood dynamics in lowland rivers, vegetation-derived channel/floodplain roughness, and once upon a time-- flood frequency/magnitude analyses. He has published widely in refereed papers of journals, books, and symposia proceedings. Cliff was a student of the late John T. Hack at the George Washington University, where he received his doctorate in 1984 in plant ecology and geomorphology. He received his M.S. degree from George Mason University in plant ecology (1979). Dr. Hupp is the 1993 recipient of the Ecological Society of America, W.C. Cooper Award for outstanding research in physiographic ecology. He received the U.S. Department of Interior Superior Service Award in 2006 and the Senior Research Award of the Association of Southeastern Biologists in 2010. He served as section editor for the ESA journals “Ecology” and “Ecological Monographs” from 1999 until 2009 and is co-editor of the Ecogeomorphology Volume of the Treatise in Geomorphology. This project’s research in the cross-disciplinary field of geomorphic forms and processes and vegetation ecology, particularly (but not limited to) in alluvial areas is recognized within the Division, the USGS, and worldwide as a leader in this field. A paper on riparian vegetation and fluvial geomorphology (Hupp and Osterkamp, 1996) is the third most frequently cited paper published in the journal Geomorphology. Since 1992 this project has greatly increased the number of wetlands studied for sedimentation rates, and has been instrumental in providing guidance to other researchers both inside and outside the USGS who have also dramatically increased this number. This has lead to a worldwide greater appreciatio 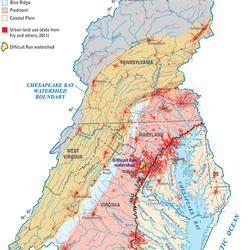 Science Summary—Sediment and Nutrient Trapping in the Flood Plain of Difficult Run, Virginia, and Implications for the Restoration of Chesapeake Bay

As the largest and most productive estuary in North America, Chesapeake Bay is a vital ecological and economic resource. The bay and its tributaries have been degraded in recent decades, however, by excessive inputs of nutrients (nitrogen and phosphorus) and sediment, causing poor water-quality conditions for fish and wildlife. Nitrogen and phosphorus cause algae blooms, fish kills, and poor water...
By
Chesapeake Bay Activities
link
April 25, 2017

Science Summary—Sediment and Nutrient Trapping in the Flood Plain of Difficult Run, Virginia, and Implications for the Restoration of Chesapeake Bay

As the largest and most productive estuary in North America, Chesapeake Bay is a vital ecological and economic resource. The bay and its tributaries have been degraded in recent decades, however, by excessive inputs of nutrients (nitrogen and phosphorus) and sediment, causing poor water-quality conditions for fish and wildlife. Nitrogen and phosphorus cause algae blooms, fish kills, and poor water...
Learn More
December 19, 2022

Predictions of floodplain and streambank geomorphic change and flux of sediment and nutrients, and streambed characteristics, for stream reaches in the Chesapeake Bay and Delaware River watersheds

Physico-chemical characteristics and sediment and nutrient fluxes of floodplains, streambanks, and streambeds in the Chesapeake Bay and Delaware River watersheds

Data supporting the study to evaluate the effectiveness of floodplain reconnection on water quality functions along Pocomoke River, Maryland.

This USGS Data Release represents tabular data for chemical and physical attributes, rates of deposition, erosion, and mineralization of bank and floodplain sediments and soils from five study sites in the Smith Creek watershed between 2012 and 2015. The data release was produced in compliance with the new 'open data' requirements as a way to make the scientific products associated with USGS resea
By
Water Resources
Filter Total Items: 82
May 19, 2022

The tidal freshwater zone near the estuarine head-of-tide is potentially sensitive to both sea-level rise and associated salinity increases as well as changing watershed inputs of freshwater and nutrients. We evaluated the vegetation response of tidal freshwater forested wetlands (TFFW) to changes in nontidal river versus estuarine controls along the longitudinal gradient of the Mattaponi and Pamu
By
Ecosystems, Climate Research and Development Program, Land Change Science Program, Chesapeake Bay Activities, Florence Bascom Geoscience Center, Wetland and Aquatic Research Center
June 21, 2020

Sediment dynamics and implications for management: State of the science from long‐term research in the Chesapeake Bay watershed, USA

This review aims to synthesize the current knowledge of sediment dynamics using insights from long‐term research conducted in the watershed draining to the Chesapeake Bay, the largest estuary in the U.S., to inform management actions to restore the estuary and its watershed. The sediment dynamics of the Chesapeake are typical of many impaired watersheds and estuaries around the world, and this syn
By
Climate Research and Development Program, Chesapeake Bay Activities, Florence Bascom Geoscience Center, Pennsylvania Water Science Center
August 9, 2019

The effects of restored hydrologic connectivity on floodplain trapping vs. release of phosphorus, nitrogen, and sediment along the Pocomoke River, Maryland USA

River channelization and artificial levees have decreased the hydrologic connectivity of river-floodplain systems around the world. In response, restoration through enhancing connectivity has been advocated to improve the functions of floodplains, but uncertain benefits and the possibility of phosphate release from re-flooded soils has limited implementation. In this study, we measured change in f
By
Water Resources, Chesapeake Bay Activities
February 20, 2019

Recent studies suggest that about 2 Pg of organic C is stored on floodplains worldwide. The present study indicates the Atchafalaya River, fifth largest river in the United States in terms of discharge, traps 30 mm/y of sediment on average within its floodplain, which is the highest average non‐episodic rate of fluvial deposition on the U.S. Coastal Plain. We installed sediment sampling stations a
By
Ecosystems, Water Resources, Climate Research and Development Program, Land Change Science Program, Wetland and Aquatic Research Center
May 17, 2018

We examine how historic flooding in 2011 affected the geomorphic adjustments created by dam regulation along the approximately 120 km free flowing reach of the Upper Missouri River bounded upstream by the Garrison Dam (1953) and downstream by Lake Oahe Reservoir (1959) near the City of Bismarck, ND, USA. The largest flood since dam regulation occurred in 2011. Flood releases from the Garrison Dam
By
Water Resources
January 30, 2017

Determining erosion and deposition rates in urban-suburban settings and how these processes are affected by large storms is important to understanding geomorphic processes in these landscapes. Sediment yields in the suburban and urban Upper Difficult Run are among the highest ever recorded in the Chesapeake Bay watershed, ranging from 161 to 376 Mg/km2/y. Erosion and deposition of streambanks, cha
By
Water Resources, Chesapeake Bay Activities, Maryland-Delaware-D.C. Water Science Center
September 12, 2016

Introduction The work explained in this report was conducted to assess geomorphic adjustment of the lower White River, Arkansas, to hydrologic modifications and establish forest age and community structure within selected communities within the floodplain. Also, the HEC–GeoRAS model was evaluated for predicting flood depth and duration within the floodplain. Hydrologic modeling using HEC–GeoRAS is
By
Cooperative Research Units
September 7, 2016

After surveying and analyzing centuries of evidence in the floodplain of the lower Roanoke River, USGS researchers, along with colleagues from the...
Read Article