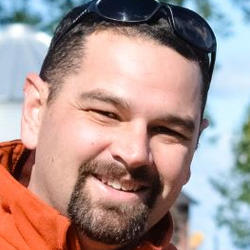 Dave Edmunds is an ecologist at the Fort Collins Science Center, whose research focuses on greater sage-grouse population dynamics in Wyoming and across the western United States.

Dave Edmunds has been an Ecologist in the Ecosystem and Landscape Dynamics Research Branch at the Fort Collins Science Center since August 2020. Prior to coming to the US Geological Survey (USGS), Dave was a Research Scientist in the Natural Resource Ecology Laboratory (NREL) at Colorado State University (CSU) while working in cooperation with the USGS in Dr. Cameron Aldridge’s lab (2014-2020). Dave maintains his connection with CSU as an Affiliate Research Scientist in NREL.

His career began at Virginia Tech, where he earned a B.S. in Wildlife Sciences in 2002. After graduation, he moved to Wyoming where he worked as a field technician for two years assisting on research projects that focused on black and grizzly bears, mountain lions, Greater sage-grouse, and white-tailed deer. Dave obtained his M.S. and Ph.D. degrees from the University of Wyoming in the Department of Veterinary Sciences in 2008 and 2013, respectively. Both degrees were under the guidance of Dr. Todd Cornish and focused on the ecology and epidemiology of chronic wasting disease in a high prevalence white-tailed deer population in southeast Wyoming. 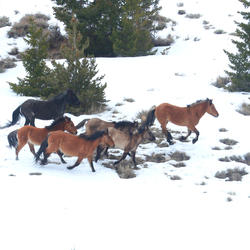 The wild horses that roam the west are feral descendents of domestic animals that either escaped from or were intentionally released by early European explorers and later settlers. As a result of both origin and contemporary management, the Spanish or Iberian influence remains strong in some wild horse populations (e.g., the Kiger, Pryor Mountain, and Sulfur Mountain herds). In other populations...
By
Fort Collins Science Center
link
August 15, 2016

The wild horses that roam the west are feral descendents of domestic animals that either escaped from or were intentionally released by early European explorers and later settlers. As a result of both origin and contemporary management, the Spanish or Iberian influence remains strong in some wild horse populations (e.g., the Kiger, Pryor Mountain, and Sulfur Mountain herds). In other populations...
Learn More
August 18, 2021

All data layers included in this data release were created using the Prioritizing Restoration of Sagebrush Ecosystems Tool (PReSET) tool, which relies on spatial inputs on species distributions and likelihood of restoration success to select parcels for sagebrush restoration. The PReSET is a workflow that relies on the prioritizr package in program R to identify parcels for effective and meaningfu
By
Fort Collins Science Center
September 26, 2019

We developed a hierarchical clustering approach that identifies biologically relevant landscape units that can 1) be used as a long-term population monitoring framework, 2) be repeated across the Greater sage-grouse range, 3) be used to track the outcomes of local and regional populations by comparing population changes across scales, and 4) be used to inform where to best spatially target studies
By
Fort Collins Science Center
October 18, 2017

Chronic wasting disease (CWD) is an invariably fatal transmissible spongiform encephalopathy of white-tailed deer, mule deer, elk, and moose. Despite a 100% fatality rate, areas of high prevalence, and increasingly expanding geographic endemic areas, little is known about the population-level effects of CWD in deer. To investigate these effects, we tested the null hypothesis that high prevalence C
By
Cooperative Research Units
September 25, 2019

The scale at which analyses are performed can have an effect on model results and often one scale does not accurately describe the ecological phenomena of interest (e.g., population trends) for wide-ranging species: yet, most ecological studies are performed at a single, arbitrary scale. To best determine local and regional trends for greater sage-grouse (Centrocercus urophasianus) in Wyoming, USA
By
Ecosystems, Fort Collins Science Center
April 20, 2016

Annual counts of males displaying at lek sites are an important tool for monitoring greater sage-grouse populations (Centrocercus urophasianus), but seasonal and diurnal variation in lek attendance may increase variance and bias of trend analyses. Recommendations for protocols to reduce observation error have called for restricting lek counts to within 30 minutes of sunrise, but this may limit the
By
Ecosystems, Sage-grouse & Sagebrush Ecosystem, Fort Collins Science Center
March 6, 2021

Long-term monitoring of natural resources is imperative for increasing the understanding of ecosystem processes, services, and how to manage those ecosystems to maintain or improve function. Challenges with using these data may occur because methods of monitoring changed over time, multiple organizations collect and manage data differently, and monetary resources fluctuate, affecting many aspects
By
Ecosystems, Fort Collins Science Center
July 26, 2021

Strategic restoration of altered habitat is one method for addressing worldwide biodiversity declines. Within the sagebrush steppe of western North America, habitat degradation has been linked to declines in many species, making restoration a priority for managers; however, limited funding, spatiotemporal variation in restoration success, and the need to manage for diverse wildlife species make de
By
Ecosystems, Fort Collins Science Center
June 3, 2021

Greater sage-grouse (Centrocercus urophasianus) are landscape-scale sagebrush obligate species and an important gamebird and iconic species of the western United States. They occupy the sagebrush biome in western North America, extending east of the Sierra Nevada/Cascade Mountain ranges to the western regions of the Great Plains of the United States. Sage-grouse are one of the most closely monitor
By
Fort Collins Science Center
September 26, 2019

Scientists from the US Geological Survey Fort Collins Science Center will be presenting on topics ranging from sage-grouse to invasive plant species...