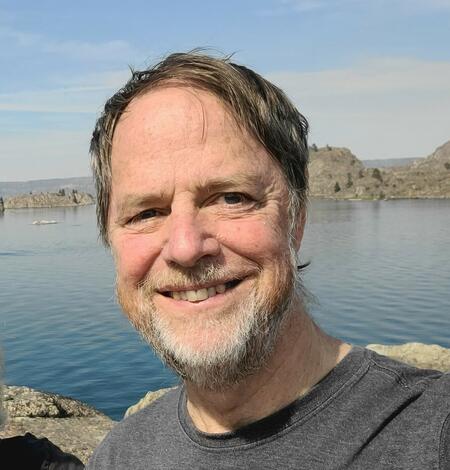 I have spent much of my career working to understand, assess, and mitigate the hazards of volcanic ash.

To understand the nature of the hazard, I have studied tephra deposits in the field and designed experiments to generate volcanic ash in the laboratory.  I also develop and use models that simulate the ascent of magma in conduits, rise of ash in volcanic plumes, and downwind movement of ash clouds.  I have been involved in the development and application of several models that simulate these processes.

I have worked with emergency managers, Volcanic Ash Advisory Centers, and specialists from more than a dozen volcano observatories around the world to improve the accuracy of volcanic ash forecasts, both for aviation safety and for ground-based communities.  From 2010-2020 I served as co-chair of the World Meteorological Organization’s Volcanic Ash Scientific Advisory Group, an expert panel dedicated to advising Volcanic Ash Advisory Centers on the science and practice of volcanic ash-cloud detection and forecasting.

My professional life began as a mud logger working on the North Slope of Alaska in 1980-81.  While studying for my master’s degree at Stanford in 1982-84, I worked part time for the Tectonophysics branch of the USGS in Menlo Park, California, where I assisted with hydraulic fracturing stress measurements, and studied the growth of fractures and the development of breakouts, i.e. stress-induced zones of failure, around boreholes in sandstone.

My Ph.D. work at Stanford, from 1984-1988, under Professor David Pollard, involved field and laboratory study of the growth of surface faults above a shallow dike in Long Valley Caldera, California.   A second half of this study focused on how the dike heated groundwater that erupted to produce several large explosion craters, the Inyo Craters, north of the town of Mammoth Lakes.

After completing my Ph.D., I worked from 1988-1990 as a post-doctoral researcher in the Geophysics Institute at the University of Karlsruhe, Germany.  My tasks included compiling data for the European part of a World Stress Map project, and examining the state of stress at a deep drillhole site in northern Bavaria.

At the Cascades Volcano Observatory, from 1990 through the late 2000s, I concentrated on the role of water in the style and timing of eruptions.  This work involved, for example, an examination of correlations between rainfall and gas explosions at Mount St. Helens; on the conditions that produced explosive phreatomagmatic eruptions at Kilauea, and effects of turbulent water-magma mixing on eruptive style.

Since the late 2000s, I have been involved primarily in volcanic ash hazards, as described above.

Modeling the Ash Distribution of a Yellowstone Supereruption

The topic of Yellowstone supereruptions (ones producing greater than one thousand cubic kilometers of volcanic debris) generates much interest, but...

The Eyjafjallajökull eruption of 2010 demonstrated the far-reaching impact of ash clouds and the vulnerability of our jet-based society to them, prompting a review of procedures to detect, warn, and forecast ash cloud hazards to aviation. The years since 2010 have seen marked improvements in satellite technology, more accurate ash-dispersion models that integrate simulations with observations, and
By
Volcano Hazards, Volcano Science Center, Geology, Geophysics, and Geochemistry Science Center
September 24, 2021

Retrospective eruption characterization is valuable for advancing our understanding of volcanic systems and evaluating our observational capabilities, especially with remote technologies (defined here as a space-borne system or non-local, ground-based instrumentation which include regional and remote infrasound sensors). In June 2019, the open-system Ulawun volcano, Papua New Guinea, produced a VE
By
Volcano Hazards, Volcano Science Center
May 25, 2021

Eruptive column models are powerful tools for investigating the transport of volcanic gas and ash, reconstructing past explosive eruptions, and simulating future hazards. However, the evaluation of these models is challenging as it requires independent estimates of the main model inputs (e.g. mass eruption rate) and outputs (e.g. column height). There exists no database of independently estimated
By
Volcano Hazards, Volcano Science Center
April 30, 2021

For this abstract, we have selected an impact location, consistent with the PDC2021 initial scenario [1], in the San Juan Mountains, in southwestern Colorado. This is a low-density population area but is part of the watershed system within the Colorado River basin, a major source for water and power for the southwestern United States. Several large cities and major airports are potentially downwin
By
Natural Hazards, Astrogeology Science Center
January 21, 2021

A probabilistic assessment of tephra-fall hazards at Hanford, Washington, from a future eruption of Mount St. Helens

Hanford, Washington (USA) is the construction site of a multi-billion-dollar high-level nuclear waste treatment facility. This site lies 200 kilometers (km) east of Mount St. Helens (MSH), the most active volcano in the contiguous United States. Tephra from a future MSH eruption could pose a hazard to the air intake and filtration systems at this plant. In this report, we present a probabilistic e
By
Volcano Hazards, Volcano Science Center
September 27, 2020

Comparing simulations of umbrella-cloud growth and ash transport with observations from Pinatubo, Kelud, and Calbuco volcanoes

The largest explosive volcanic eruptions produce umbrella clouds that drive ash radially outward, enlarging the area that impacts aviation and ground-based communities. Models must consider the effects of umbrella spreading when forecasting hazards from these eruptions. In this paper we test a version of the advection–dispersion model Ash3d that considers umbrella spreading by comparing its simula
By
Volcano Hazards, Volcano Science Center
February 6, 2020

Did ice-charging generate volcanic lightning during the 2016–2017 eruption of Bogoslof volcano, Alaska?

During volcanic eruptions, model predictions of plume height are limited by the accuracy of entrainment coefficients used in many plume models. Typically, two parameters are used, α and β, which relate the entrained air speed to the jet speed in the axial and cross‐flow directions, respectively. To improve estimates of these parameters, wind tunnel experiments have been conducted for a range of cr
By
Volcano Hazards, Volcano Science Center
August 27, 2019

Fresh volcanic eruption deposits tend to be loose, bare, and readily resuspended by wind. Major resuspension events in Patagonia, Iceland, and Alaska have lofted ash clouds with potential to impact aircraft, infrastructure, and downwind communities. However, poor constraints on this resuspension process limit our ability to model this phenomenon. Here, we present laboratory experiments measuring t
By
Volcano Hazards, Volcano Science Center
May 31, 2019

Hazard analysis at caldera volcanoes is challenging due to the wide range of eruptive and environmental conditions that can plausibly occur during renewed activity. Taupo volcano, New Zealand, is a frequently active and productive rhyolitic caldera volcano that has hosted the world's youngest known supereruption and numerous smaller explosive events. To assess ashfall hazard from future eruptions,
By
Volcano Hazards, Volcano Science Center
February 17, 2021

Data used to develop a probabilistic assessment of tephra-fall hazards at Hanford, Washington

Data in this data release contain Model input and output for simulations used to estimate the amount of tephra that could fall on the Hanford nuclear waste repository. The results of that study were written up in the report: Mastin, L.G., Van Eaton, A.E., and Schwaiger, H.F., 2020 A Probabilistic Assessment of Tephra-Fall Hazards at Hanford, Washington, from a Future Eruption of Mount St. Helens,
By
Volcano Hazards
February 17, 2021

Plots of Wind Patterns of the World's Volcanoes

This product includes rose diagrams and tables of wind patterns at volcanoes listed in the Smithsonian Institution's Volcanoes of the World Database. At each volcano, the speed and direction of wind above the volcano were read from output of the NCEP/NCAR Reanalysis 1 model, at twice-daily intervals from January 1, 1990 to December 28, 2009. These results were then plotted as 20 wind rose diagra
By
Volcano Hazards, Volcano Science Center