Water is a necessary component for many processes required for developing continuous oil and gas (COG) resources. Improved COG extraction techniques have greatly increased oil and gas production in the United States since the mid-2000s. However, the accompanying rapid increase in demand for large volumes of water, often in remote regions, can challenge existing infrastructure and require additional resources to meet water needs. Addressing this water need requires accurate estimates of the volumes of water used to support the various processes common to COG development in the United States in the 21st century.

In 2015, the U.S. Geological Survey (USGS) started a topical study focused on quantifying water use in areas of COG development. The topical study was supported through the USGS Water Availability and Use Science Program (WAUSP), which was authorized by the Science and Engineering to Comprehensively Understand and Responsibly Enhance Water Act (SECURE Water Act) in the Omnibus Public Land Management Act of 2009 (16 U.S.C. 1 note). In the SECURE Water Act, the USGS was tasked with conducting a National Water Census to better quantify water use in the United States, including water supporting COG development. One of the main goals of the WAUSP is to provide accurate estimates of water resources in the United States and to offer methods for determining the quantity and quality of water available for beneficial uses. This topical study to quantify water use related to COG development will help achieve that WAUSP goal. Additionally, the results from this topical study will be used to further refine the methods used in compiling water-use data for selected categories (for example, mining, domestic self-supplied, public supply, and wastewater) in the USGS’s national water-use estimates reports.

Starting in the 2000s, technological advances, scarcity of access to conventional oil and gas accumulations, and the rise of oil and gas prices resulted in development of COG accumulations. The COG resources in the United States are being produced using horizontal drilling technologies, which expose a larger amount of reservoir for thin horizontal units to the wellbore compared to vertical wells (see figure below). Once the well is drilled, fluid (typically water with additives) and proppant (solid material such as silica sand or man-made ceramics) is pumped into the well at high pressure, opening cracks that release oil, gas, or both through a process known as hydraulic fracturing (or fracking), which stimulates movement of hydrocarbons in tight (low permeability and porosity, typically shale) formations. Rapid COG development throughout the Nation has led to hundreds of thousands of wells being hydraulically fractured annually. Water availability and the potential for reduction in aquifer storage volumes are important considerations in COG settings. The process of developing an oil or gas well in a tight shale formation requires large volumes of water for initial fracturing processes: about 2 million gallons per oil well and 4.1 million gallons per gas well. Additional water is needed for re-fracturing and borehole maintenance; indirect water uses, such as crew camps and road dust abatement; and ancillary uses, such as supportive energy industries, commercial developments, and recreation (see figure below). These additional water uses have not been quantified on a regional scale.

The objective of this topical study is to develop methods to estimate water use for COG development in the United States as a multiphase study:

Phase III. The application of the approach that was developed in phase I and verified through phase II is planned to be utilized across the contiguous United States, in an effort to characterize the water use in all major basins. This national assessment of water use will use the most current national databases to provide the most comprehensive estimates of water use. Using similar techniques and databases will allow scientists, researchers, and water managers the opportunity to compare water uses among basins and identify possible influences changes in water use may have in an area of increasing oil and gas development. 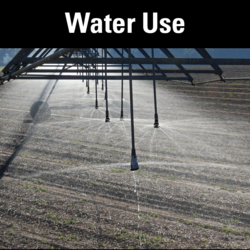 Through the National Water Census, USGS will provide more comprehensive reporting of national information on withdrawal, conveyance, consumptive use, and return flow by water-use category. Water-use data enables water managers to plan more strategically and enables the analysis of trends of over time. It is also vital to water-availability studies such as watershed and groundwater models.
By
Water Resources, Water Resources Research Act Program
link
March 2, 2019

Through the National Water Census, USGS will provide more comprehensive reporting of national information on withdrawal, conveyance, consumptive use, and return flow by water-use category. Water-use data enables water managers to plan more strategically and enables the analysis of trends of over time. It is also vital to water-availability studies such as watershed and groundwater models.
Learn More

Estimates of water use associated with continuous oil and gas development in the Williston Basin, North Dakota and Montana, 2007–17

An analytical framework was designed to estimate water use associated with continuous oil and gas (COG) development in support of the U.S. Geological Survey Water Availability and Use Science Program. This framework was developed to better understand the relation between the production of COG resources for energy and the amount of water needed to sustain this type of energy development in the Unit
By
Dakota Water Science Center, Wyoming-Montana Water Science Center
March 15, 2018

The U.S. Geological Survey’s (USGS) Water Availability and Use Science Program (WAUSP) goals are to provide a more accurate assessment of the status of the water resources of the United States and assist in the determination of the quantity and quality of water that is available for beneficial uses. These assessments would identify long-term trends or changes in water availability since the 1950s
By
Water Resources, Dakota Water Science Center