The accumulated wildfires engulfing miles of California countryside in the late summer of 2020 are historic in their collective size: more than 500 fires burning across hundreds of thousands of acres. 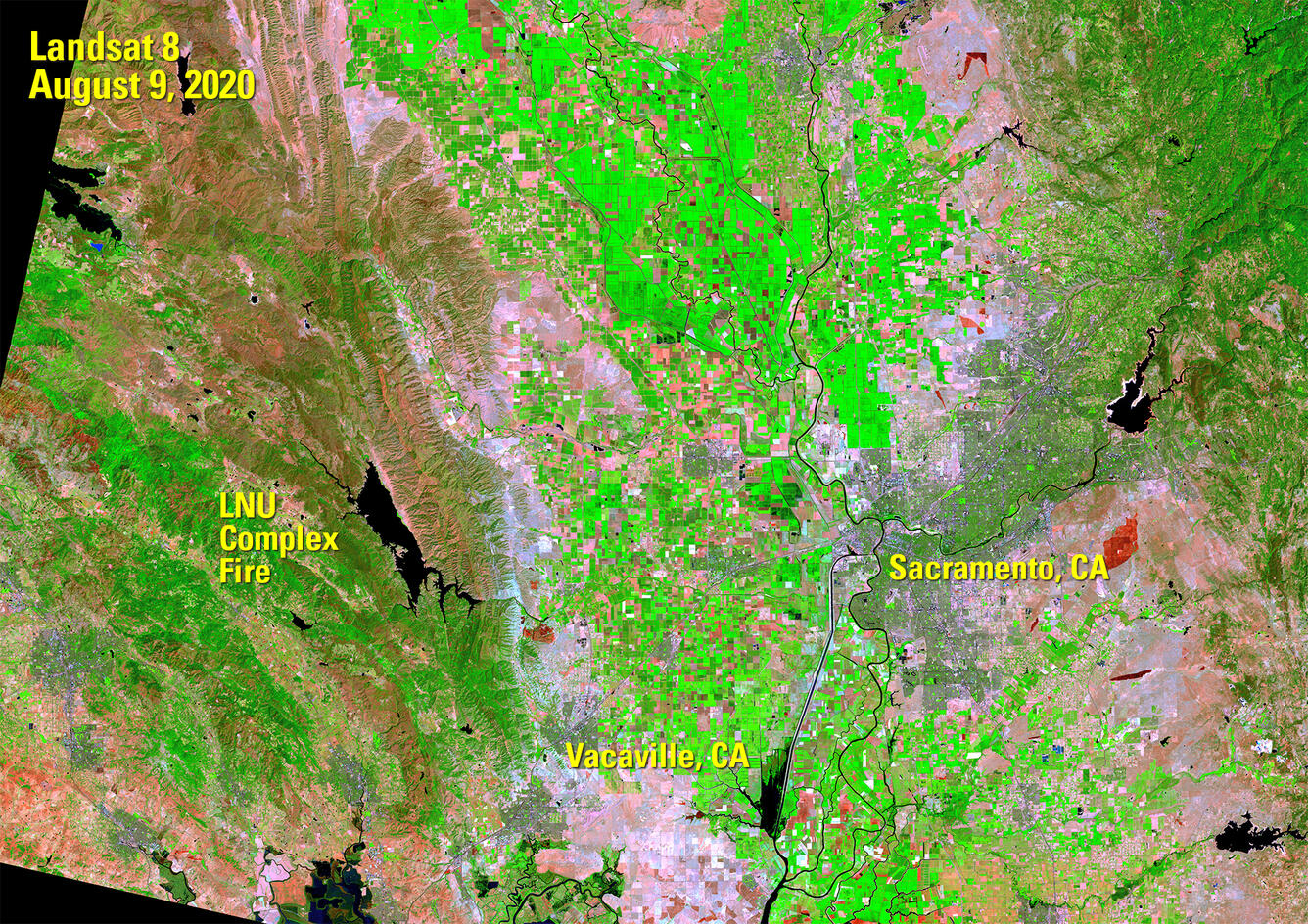 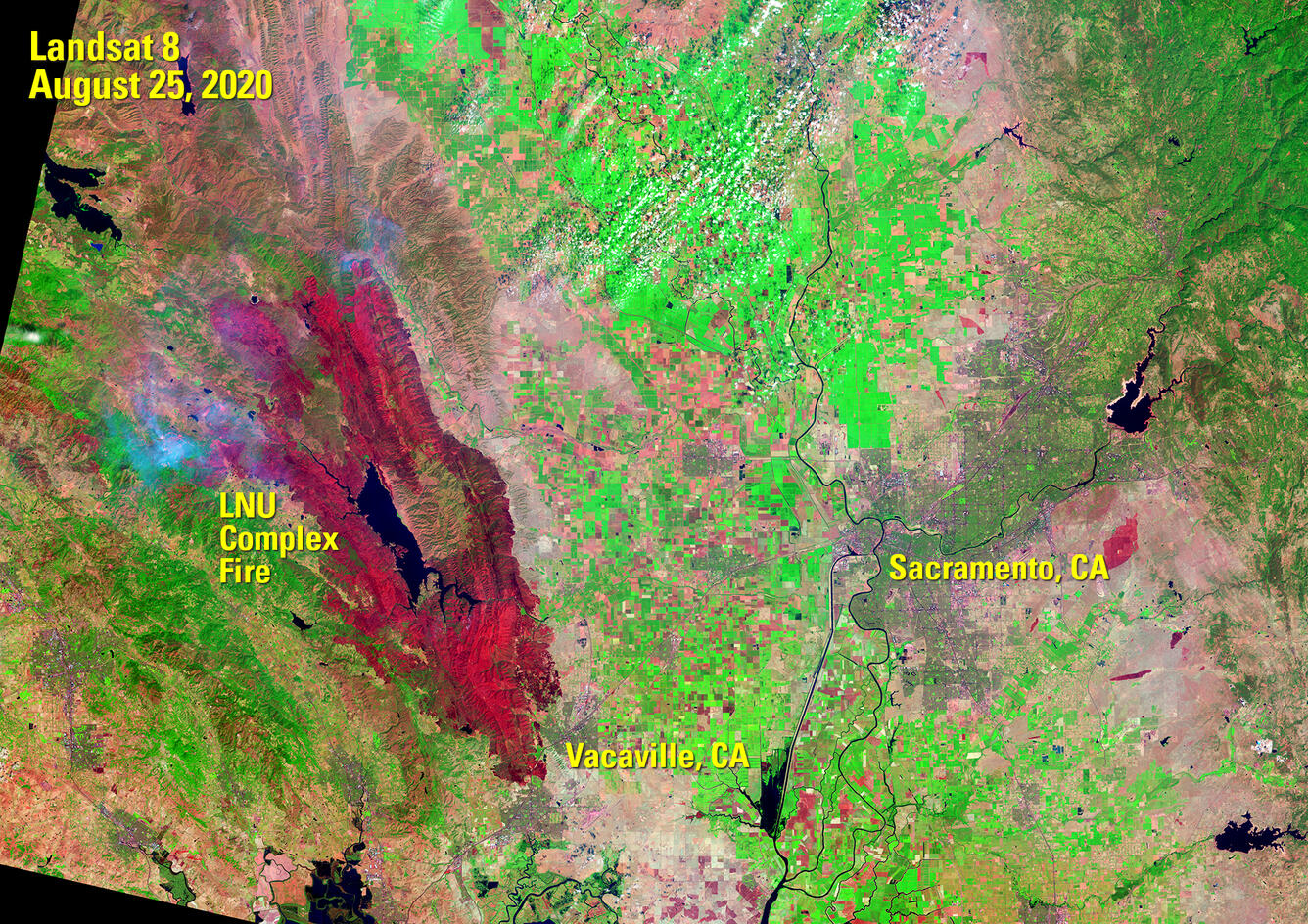 The Lake Napa Unit (LNU) Complex Fire, a series of fires that grew and combined across the Sonoma County area, is laying waste to timber and brush with the help of high winds and dry lightning. The false color Landsat 8 images above were created using the near-infrared and shortwave infrared bands, making active burning and fire scars more prominent.

Further south, the Santa Cruz Unit (SCU) Complex Fire the Bay Area has inched closer to cities like San Jose on the fire’s western edge and Modesto on its eastern edge. 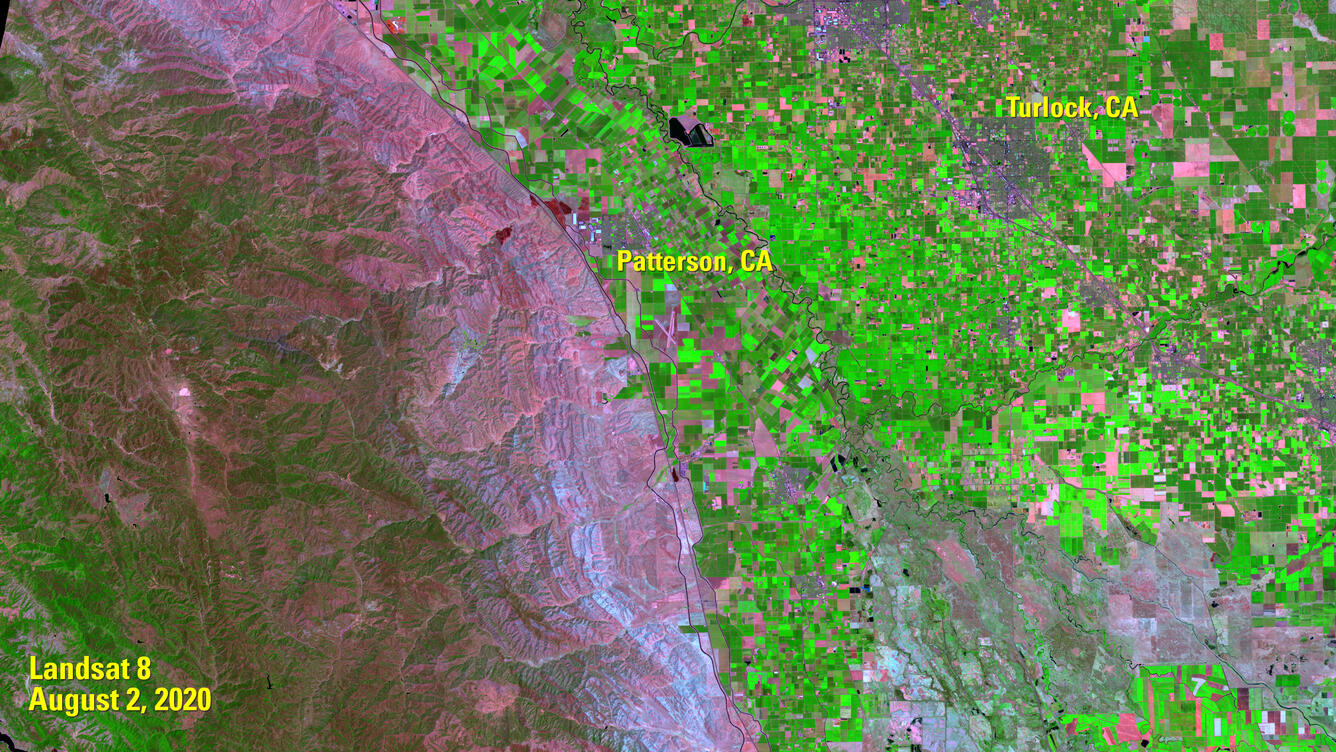 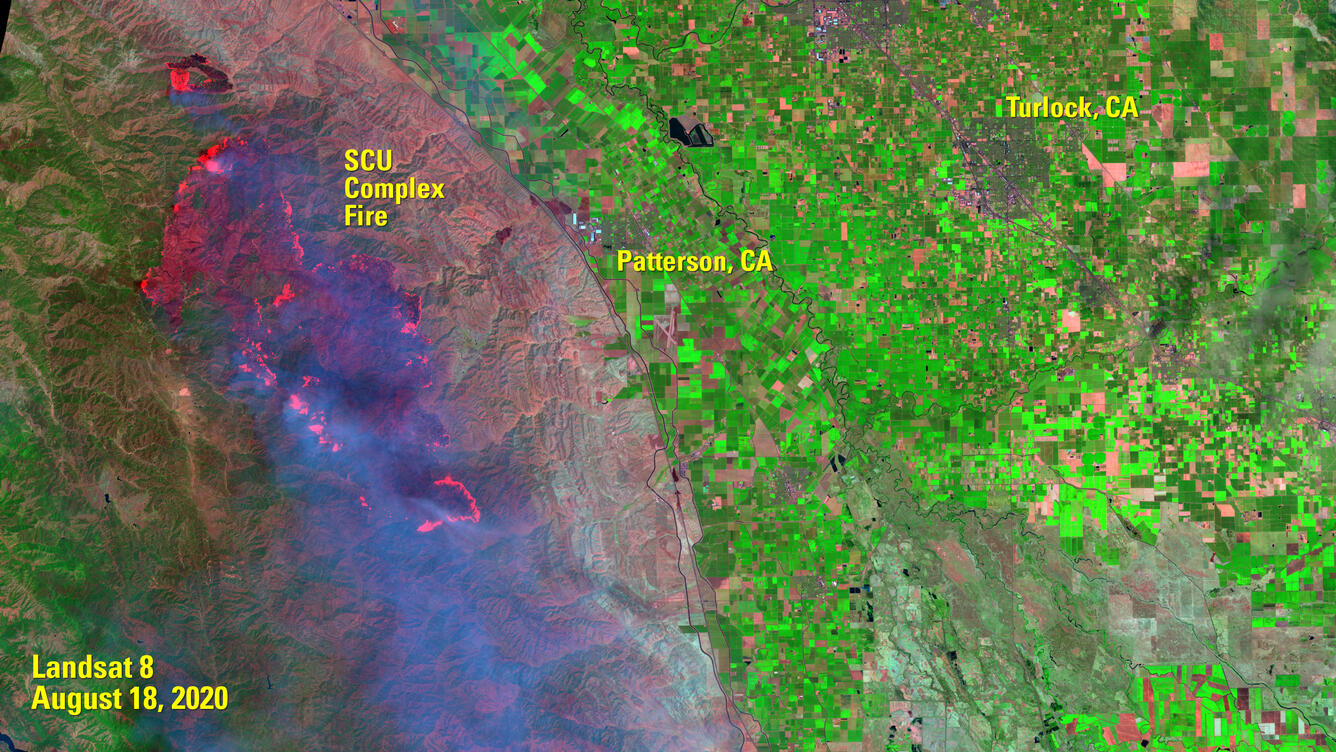 The false color image on the right above shows the SCU Complex Fire’s progress toward becoming the largest fire in the U.S. for 2020 so far. As of August 25, it had burned nearly 366,000 acres.

The smoky air drifting across the U.S. from California through late August will gather additional smoky particulates from the flames now etching historic damage into the mountainsides of Colorado.

The Pine Gulch Fire grew from a half-mile speck of lightning-sparked flame north of Grand Junction to a burn scar some 23 miles in just 22 days. Near-infrared data from the USGS Landsat 8 and European Space Agency’s Sentinel-2B satellites show that growth, rendering the burn scar in crimson and active flames in bright orange.

Pine Gulch is just one of five 200 acre-plus wildfires burning in Colorado in the last week of August. Pine Gulch is the largest, having burned more than 130,000 acres. 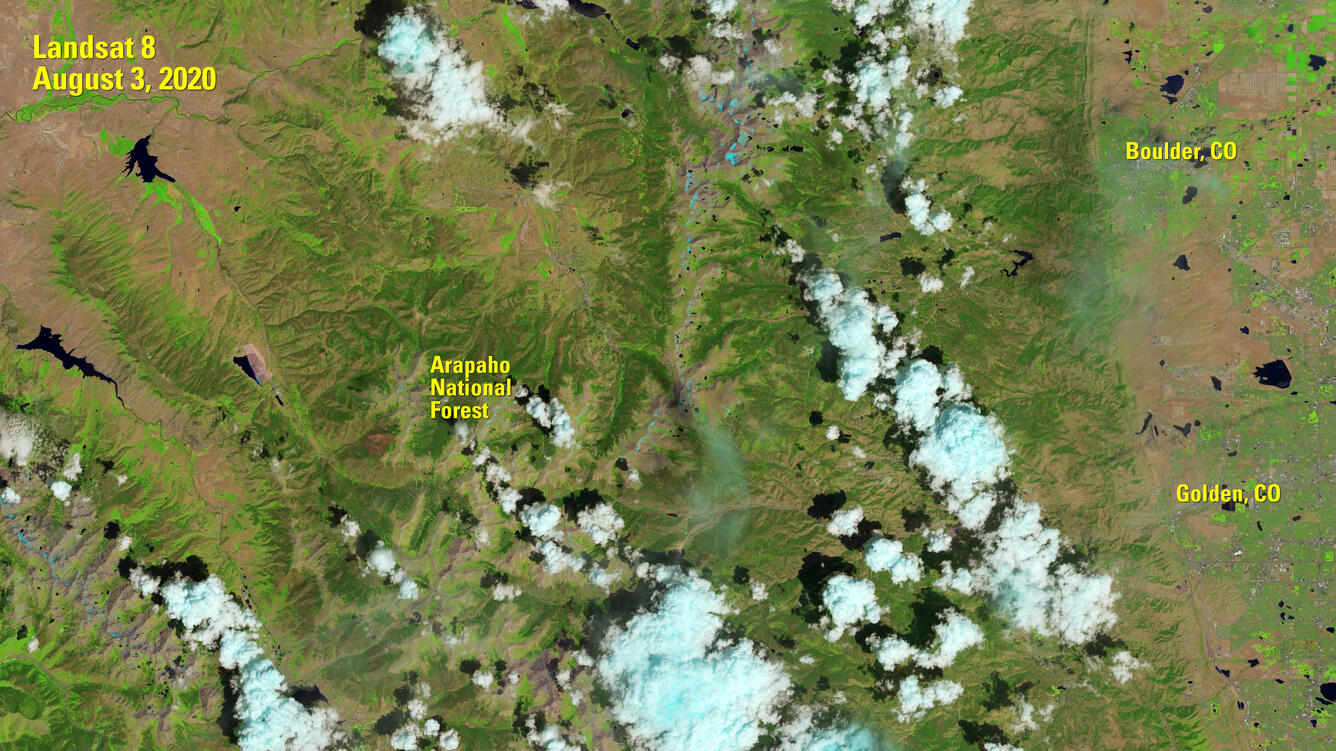 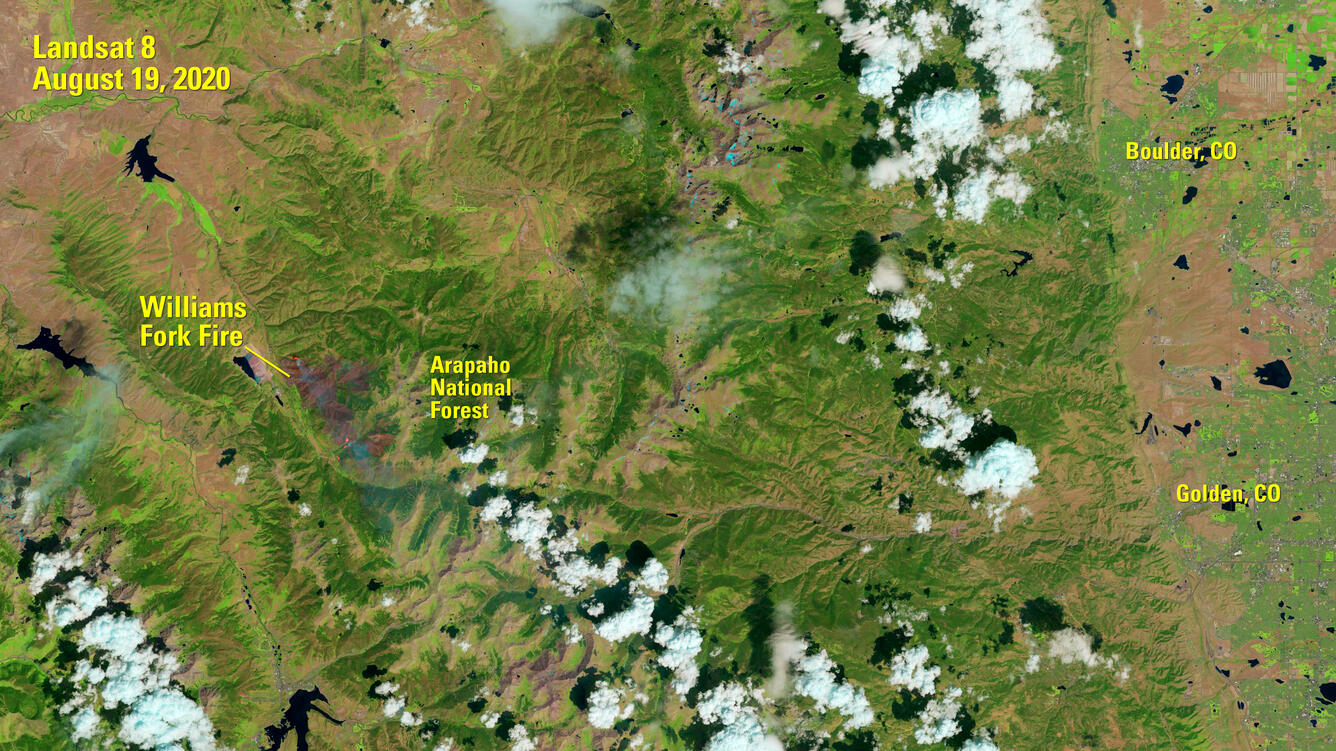 The Williams Fork Fire had burned more than 11,000 acres as of August 24, 2020. The images above show the growth of that fire, which is burning across the Arapaho and Roosevelt National Forests and the Pawnee National Grasslands. The human-caused fire started on August 14. The burn scar’s eastern edge in the August 19 image above is about 40 miles west of the Denver suburb of Golden, CO.

Data from public satellites like Landsat and Sentinel and commercial satellites is ingested and distributed for use by first responders and research agencies by the USGS Hazards Data Distribution System (HDDS). The fire information helps aid teams working to map fire perimeters and guide firefighting efforts in both states.