On a pleasant, breezy summer day, a crowd gathered under a white event tent on the USGS Earth Resources Observation and Science (EROS) Center’s lawn to witness a milestone in the life of the Landsat 9 satellite.

NASA had led the construction and September 2021 launch of the most recent Earth observation satellite in the 50-year program, and it was time to turn over operation of Landsat 9 to the USGS, which archives all Landsat data at EROS. So, on August 11, 2022, people who had traveled from homes nearby, around the country, and even outside of the United States to rural South Dakota celebrated the occasion. Landsat 9 and sister satellite Landsat 8 together survey the globe from 438 miles above on an eight-day repeat cycle.

Since the launch of Landsat 1 in 1972, the program has provided benefits beyond scientists’ and agencies’ expectations, from natural resource monitoring and management of farm fields and grasslands, like those surrounding USGS EROS, to forests, surface water, glaciers—even wildfires and other disasters. The wealth of data captured over 50 years offers an invaluable look at change over time in our backyards and in places few people, if any, have ventured.

Ceremony speakers praised the program and its newest addition. The audience, seated in rows of white chairs and buzzing with conversation beforehand, quieted to listen—and, at times, laugh. Remote sensing, it turns out, doesn’t have to be completely serious.

USGS EROS Chief of Staff Tim Glynn served as master of ceremonies, and Pete Doucette, the Acting Director of EROS, welcomed the robust crowd, which included visitors from NASA and the USGS, EROS employees, members of the Landsat Science Team including academia and additional federal agencies, guests from nearby South Dakota State University and from AmericaView, several media outlets, and others.

“Today is that special day where the baton gets passed, in a manner of speaking, between NASA and the USGS for operation and ownership of Landsat 9. This follows about 7 years of steadfast dedication among NASA, USGS, and industry staff to reach this point,” Doucette announced.

He also looked to the future. “As we transition from the information age that Landsat played a big part of to the age of imagination, through artificial intelligence, we’ll have new opportunities to expand the utility of Landsat data and new Landsat missions in ways we have yet to imagine.”

Paul TenHaken, mayor of South Dakota’s largest city, Sioux Falls, stepped up to the podium next. Sioux Falls helped entice EROS to its spot north of the city when the Landsat program began, and many employees live in Sioux Falls.

“I just want to say thanks to all the EROS employees that are out here,” TenHaken said.

“You’re an incredible economic driver to this whole region. Because you’re not physically located in Sioux Falls, you’re kind of this Area 51 myth out here. We at times forget about the incredible impact that EROS is having, not only economically for our region, but the work you’re doing for our entire world, and it’s really quite cool,” TenHaken said.

Then he unintentionally started a joke that continued through the rest of the ceremony. TenHaken, who founded an online marketing company before becoming mayor, suggested that perhaps Landsat could use some marketing advice for a more creative strategy for satellite names. “Instead of the Landsat 1, 2, 3, there may be other neat ways you could name these things,” he said.

Amid the audience laughter, he added, “Landsat Sioux Falls is available.”

The ceremony’s keynote speaker, Tanya Trujillo, Assistant Secretary for Water and Science in the Department of the Interior, had attended the launch of Landsat 9 and participated in a conversation before the ceremony with USGS Mendenhall Fellow and Ladies of Landsat co-director Kate Fickas. Trujillo called the Landsat program one of a kind, saying, “We have to ensure that it continues into the future.”

Then she addressed TenHaken, to the amusement of the audience. “So, mayor, the next satellite is called Landsat Next.”

More seriously, Trujillo went on to mention Landsat’s uses in other Interior agencies, such as the U.S. Fish and Wildlife Service and National Park Service. “NASA is our No. 1 partner in this program, but I’ve heard firsthand stories from other agencies where they benefit directly from the Landsat images—the Department of Agriculture, the Corps of Engineers, EPA. All of our federal family is utilizing this tool. And right now we have unprecedented conditions around the country in connection with some of the changing climate dynamic system that we’re seeing.”

Front-page Landsat images comparing Lake Mead at its highs and now its record low water levels help visualize the drought in the West, Trujillo said. “Those images help feed into our ability to respond to that dynamic climate.”

David Applegate, Director of the USGS, echoed this importance. “There’s nothing more powerful than an image, and all of the analysis that goes with that, to help to make change over time real to people and to be able to translate all of this wonderful knowledge and technology into actionable information,” he said.

“That really is the heart of the USGS. We bring foundational datasets, we bring expertise. But it’s all in order to be able to deliver information … that helps make decisions across the board. The bottom line is, we want our science put to use,” Applegate said.

Two speakers from NASA helped represent the partnership between the two agencies.

Michael Egan, NASA Landsat 9 Program Executive, said NASA certainly spends time looking at other planets. “But what a lot of people don’t realize, in addition to that, we spend a lot of time looking at and studying what we in the Earth science division like to call the best planet: Earth. And Landsat is one of the first missions where we did go back and start to study the Earth.”

Egan then affirmed the reason for the ceremony. “I’m proud to share with you the news today that Landsat 9 is fully mission certified.”

NASA Deputy Director of Flight Projects Directorate Cathy Richardson said she had worked on the thermal infrared sensor (TIRS) for Landsat 8 and oversaw much of the development of Landsat 9, which contains an improved copy of TIRS.

“So this is TIRS-2—” she said pointedly to TenHaken, “to follow TIRS-1,” as the audience erupted with laughter.

Richardson also credited the people who worked on Landsat 9 and adapted through a variety of challenges, including a pandemic. “We are tremendously proud to have had the long history and opportunity to build Landsat satellites and to be part of the program and the organizations contributing to Landsat now and in the future,” she said.

“Our partnership with USGS is extremely important. Today as we transition Landsat 9 to USGS, we are celebrating another significant milestone for our partnership and program.”

Hearing from the Users

Boston University professor Curtis Woodcock, who’s also a Landsat Science Team leader, started his speech next by confessing that he started using Landsat in 1976 as a college undergrad, and that he’s still using it. “One way to look at that, probably realistic, is—I’m addicted,” Woodcock said. “I’m a user.”

The audience laughed at that and many more times as Woodcock went on to imagine the Landsat program’s 50-year history as an action-thriller movie plot. Superheroes would include the engineers tasked with building and launching the first Landsat, along with the operators who kept Landsat 5 going as an aging lone satellite and avoided a gap of lost data in the continuous archive. “We went through a sort of hair-raising stretch of time while they nursed back to life and maintained and kept these things alive,” he said.

Woodcock praised the value of the archive. “Really, the benefit of the Landsat program in the long run has proven to be its archive. That we have the consistent data to do things has been wonderful, and to track change, you’ve got to know what was there before.”

The final speaker was Chris Crawford, who among many roles at EROS serves as the USGS Landsat project scientist and also a Landsat Science Team leader. He displayed a Landsat 9 image depicting the Quelccaya Ice Cap in the Andes in Peru, a remnant of a past environment.

“Landsat has really been playing a key role over time since the ’70s in defining systematic observations in this tropical environment to document how much glacial mass we’ve lost over the past half-century, which is estimated to be about 20 percent,” Crawford said.

“Under the current projected atmospheric warming, there’s a potential for this ice field to disappear by the 2050s. So I think this really highlights an example of why Landsat’s so important and can be used to verify and confirm and study and mitigate the impacts of climate variability and change and how that’s going to affect people on the planet,” he added.

Decades of partnership. Years of planning for a new satellite and its launch. Months of its data already poured into the growing Landsat archive. It all came down to a day of celebration—though not just of a single satellite.

The audience also gathered under a tent in rural South Dakota to celebrate five decades of Landsat continually keeping watch over the Earth, five decades of data use to benefit humanity and the Earth’s resources, and all that Landsat has yet to reveal in the future.

Read more about Landsat 9's transition to the USGS. 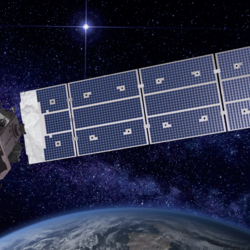 The Landsat 9 Data User Handbook is now available for download from the Landsat Missions Web Site.