To see an example of the adage “Planning makes perfect,” just take a look at the Landsat 9 underfly. The once-in-a-mission event placed the recently launched Earth-observing satellite in orbit directly below Landsat 8 for several days in the middle of November.

“The underfly gave us the only opportunity that we’ll have between Landsat 8 and 9 to get a ground collect with simultaneous imagery from both missions,” said Cody Anderson, project manager of the U.S. Geological Survey (USGS) Earth Resources Observation and Science (EROS) Cal/Val Center of Excellence (ECCOE), focused on calibration and validation of remote sensing data, including Landsat 9. “We’ll be able to validate both of them at the same time.”

This helps ensure that the high standard for Landsat imagery in the nearly 50-year archive will continue, especially as the archive is processed and products are developed to the highest quality possible.

“In combination with moving to surface reflectance and surface temperature products with Landsat Collection 2, this gives scientists confidence in the accuracy of those products,” Anderson said.

The effort to downlink additional data and collect calibration field measurements spanned the globe, from Australia to Indonesia to Canada. In the United States, universities took measurements in North Carolina, California, and around the South Dakota-Minnesota border. Meanwhile, a duo from the ECCOE team took a rapid road trip to the southwestern U.S.

“We got awfully lucky by avoiding the clouds,” Anderson said. “We got some good collects, including a few that were in a pretty narrow window between some clouds.”

The Adventures of Jeff Irwin and Josh Mann

A road trip can make an interesting movie plot, but you’ve never seen a travelogue quite like Jeff Irwin and Josh Mann’s recent journey from EROS to a couple of grassland spots in the southwestern United States. Or like the prequel—their trial run to Wyoming.

For their underfly field collections, they left EROS Nov. 6 and drove to Coconino National Forest near Flagstaff, Arizona, for two characterization days, which involved plotting their paths and taking preliminary measurements. Then they headed to State-owned land near Guymon, Oklahoma, for two characterization days and one underfly collection day, when they took measurements at the same time Landsat 8 and Landsat 9 passed overhead. Then they drove back to Coconino in time to capture underfly measurements there.

They returned to EROS on Nov. 18—after traveling in a dark blue Ford quad cab pickup loaded with equipment for more than 4,000 miles. That would be the equivalent of nearly five trips from Earth to a Landsat satellite and back. For what it’s worth, it takes Landsat just 15 minutes to travel that distance.

Their goal was to collect hyperspectral measurements—light wavelengths across a large span of the electromagnetic spectrum—while walking in eight transects on a plot measuring 200 meters by 200 meters. Unlike other collection teams around the world, they used a dual field spectroradiometer setup that consisted of a fixed base unit that measures solar reflectance from a calibrated reflectance panel in conjunction with a mobile unit that measures ground reflectance from land cover.

The underfly adventure took plenty of planning, training, and teamwork.

Irwin, Mann, and their EROS team selected potential sites with the aid of satellite imagery, preferably on public land, that would be in the path of the underfly, that were vast and flat with uniform vegetation in an area larger than 200 square meters, that had a statistically good chance of clear days, that were accessible by vehicle, and that were within “relatively easy driving distance” of each other.

“We had to do five to six hours of field work, jump in the vehicle, drive about 400 or 500 miles, catch some sleep, and get up and drive another 200 miles in the morning to be there for the next overpass the next day.”

Irwin, a USGS geographer, has extensive field experience, including lidar and Coastal National Elevation Database (CoNED) calibration/validation work. But he only recently began working with Landsat cal/val. Mann is the contractor cal/val team, and together Irwin and Mann trained over the spring and summer in the use of the equipment and perfecting the quick setup and teardown of equipment necessary to pull off the tight underfly schedule.

“We went through a lot of training together to make sure that we were ready for this,” Mann said. “We needed to both be capable of doing every step of the process so one person, in theory, could have handled everything. But it would have been a heck of a job.”

To be sure they could manage the task of taking underfly measurements in one location, then traveling more than 600 miles to take measurements in another location the next day, they tried a test run. They collected measurements at a site EROS commonly uses near Brookings, South Dakota, then drove to Gillette, Wyoming, for the night before driving a couple of hours more to collect measurements on Bureau of Land Management land.

“That trip was a big eye-opener for us because it let us know exactly what we were going to be faced with for the travel side of things … what we’re capable of for traveling without getting on each other’s nerves too bad in the cab of the truck,” Mann said.

From that experience, they nailed down logistics and improved their site layout plan. And when they found themselves working in the middle of a prairie dog town in Wyoming that had not been visible from satellite, they confirmed the need for a backup person—if, for example, one of them had the misfortune of stepping in a prairie dog hole or getting bitten by a rattlesnake.

All the preparation and planning paid off for the actual underfly collection. Mann’s biggest worry was the one factor they couldn’t control—the weather. “We could have had two cloudy days at the moment we needed the collection, and that could have been just a wash,” he said.

The first characterization day at Coconino went well—they were able to evaluate the site in person, select the most homogeneous spot, move equipment around, and collect measurements to understand the vegetation’s spectral response. They had to record exactly where they took the measurements so they could replicate the same paths for the underfly collection. The only day when clouds hindered quality data collection was that second characterization day, but nevertheless, they collected measurements and got their timing down before driving the entire distance to Guymon the following day.

At the Guymon site, they quickly realized they were in for more of a hike than expected. The vegetation was so thick, they had to park and then haul their equipment about a quarter-mile and back for both characterization days and the overpass day. “That added to the excitement,” Irwin said.

They left immediately after that underfly collection Nov. 14 and stayed in Gallup, New Mexico. They made it to Coconino the next day in time for the 11 a.m. overpass there.

All the while, Irwin and Mann uploaded their data daily to their team at EROS, who worked to verify that the numbers met the standard for accuracy.

And when their 13-day road trip was over? “Nothing against Jeff, I was just happy to see it all completed,” Mann said.

“Agreed,” Irwin said as they both laughed.

A working group’s daily planning meetings leading up to the underfly paid off for the ground stations that had to manage much more data downlinking than usual, said Ryan Brown, the routine operations ground station manager and the Ground Network Element manager for the Landsat program.

“You essentially have both Landsat 8 and Landsat 9 on top of each other and competing for resources the entire time,” Brown said.

Some ground stations have two separate antenna systems, but others do not, Brown said, so planners had to prioritize which ground station would take which satellite’s data for the underfly.

They considered a variety of factors in advance, such as the potential for radio frequency interference between the two satellites as they approached a ground station. Because of that careful planning, the underfly “was really highly successful from a ground station perspective,” Brown said. “I was very pleasantly surprised.”

It was asking a big favor, but with the benefit of improving data quality for those regions. “It’s a win-win on both sides,” Labahn said.

ECCOE provided guidance on how to conduct field collections. Many countries wanted to participate but were unable to assemble the sufficient equipment or field teams in time. Those that did take measurements included Australia in multiple spots and Canada, via the University of Lethbridge. India and Indonesia tried, but clouds prevented them from collecting successful measurements.

This effort could turn into more, Labahn said. “We’ve viewed this as a kind of stepping stone, as the first steps toward something more reliable, more operational, where we’re getting more measurements on a regular basis.”

Adding calibration data from around the world would help improve the quality even more—a continuing goal for Landsat’s gold standard. 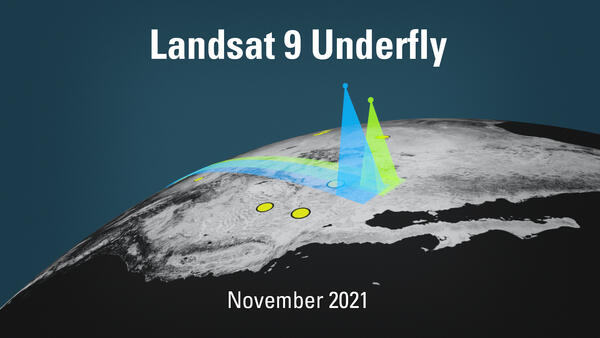