Monitoring coastal changes is important for the millions of people that live along coasts in the U.S., particularly as climate change hastens coastal erosion by raising sea levels and fueling powerful storms.

Coastlines are always in flux. In addition to facing wind, waves and currents, coasts are subject to fluctuating water levels, changing sediment supply, seasonal weather patterns, and  growth cycles of biological organisms such as kelp and coral. Monitoring these changes is important for the millions of people that live along coasts in the U.S., particularly as climate change hastens coastal erosion by raising sea levels and fueling powerful storms.

For decades, the USGS has monitored shoreline change in the United States by measuring and recording information at a study site (on the ground), using LIDAR (light detection and ranging) or GPS (Global Positioning System) surveys to meticulously collect data on beaches from coast to coast. These surveys are precise but costly, requiring lots of travel, hours of work, and expensive equipment. Using these methods to regularly monitor the 95,471 miles of coastline in the U.S. has been a monumental and impractical task.

That’s why scientists are increasingly using Earth-observing satellites as their “eyes in the sky,” collecting and analyzing satellite imagery to study coastal change.

There are currently hundreds of satellites orbiting and observing the Earth. Landsat, a joint program between the U.S. Geological Survey (USGS) and the National Aeronautics and Space Administration (NASA), is the longest-running archive of satellite imagery in the world. Landsat 1 launched in 1972; the latest iteration, Landsat 9, launched in September 2021.

“Landsat was originally designed to characterize Earth’s land cover and how it’s changed over time,” such as tracking urbanization and agricultural development, said Jon Warrick, USGS research geologist at Pacific Coastal and Marine Science Center (PCMSC). “Since the 1970s, these satellites have amassed an enormous image archive that is being leveraged for coastal science and modeling.”

Satellite-derived coastal imagery offers to profoundly change how coastal data is collected, said Sean Vitousek, USGS research oceanographer at PCMSC. For the first time, scientists can look into the past to collect data.

“With CoSMoS, we’re putting together regional coastal hazard maps for flooding, erosion and groundwater and, using similar approaches integrated across the USGS Coastal and Marine Hazards and Resources Program (CMHRP), our vision is to provide these maps on a national scale,” said Patrick Barnard, USGS research geologist at at PCMSC. “Because we’re trying to do this consistently across the country, in the past we’ve relied on LIDAR data to drive the coastal change models. In many parts of the country, there’s just a few data points or no data at all. Satellite data provides the opportunity to build a consistent approach that’s robust and data tested, with hundreds to thousands of data points in every location, all without having to spend the time and money to travel and work on site.”

One major limitation of satellite-derived coastal data is image resolution, or the amount of spatial information that each image collects. “In general, the accuracy of satellite-derived data, such as shoreline position, is less precise than traditional survey methods, such as LIDAR and GPS surveys, which typically offer centimeter-scale accuracy of shoreline position,” said Vitousek. Satellites, on the other hand, offer accuracy on the order of a few to several meters. Landsat 9 offers a spatial resolution of 15 meters and other Earth-monitoring satellites can be  in the realm of sub-meter resolution.

Another challenge is the task of analyzing the vast amount of imagery. “One of the challenges with this approach is that you have so much data to deal with,” said Warrick. In order to utilize satellite-derived data for coastal monitoring, Warrick, Vitousek, Barnard, and others are developing automated techniques and machine learning tools to quickly process thousands of shoreline images and integrate them with coastal change models.

“Yet another hurdle is estimating the shoreline, which requires finding a horizontal location of a particular vertical datum—such as mean sea level—from the waterline that can be remotely sensed from a satellite image,” said Dan Buscombe, a USGS contractor at PCMSC who develops these models. “The waterline is the horizontal location of the water’s edge, which needs to be corrected for tide and wave-driven fluctuations in water level in order to accurately estimate the shoreline.”

In addition, the USGS is collaborating with scientists at the University of New South Wales in Sydney, Australia to develop CoastSat, an open-source software kit that enables users to obtain time-series of shoreline positions anywhere in the world.

“Coastal sciences are incorporating more data-driven approaches from remotely sensed imagery to capture important processes at scales where theory breaks down, or where high-resolution numerical simulation becomes computationally infeasible,” said Buscombe. To deal with satellite imagery and the large variety of coastal environments at a national scale, Buscombe is developing an image segmentation “design pattern”: a machine-learning software blueprint that will work in conjunction with CoastSat and can be quickly customized to capture shoreline variability in satellite imagery for specific coastal environments.

“Ultimately, our goal is to develop an approach that extracts satellite data on a daily basis with national coverage and updates models continuously,” said Barnard. “These data can be applied not only to studying fundamental coastal processes, but also informing future hazard assessments and emergency management response. It’s an incredible opportunity to push the science into the 21st century.” 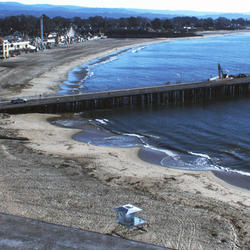 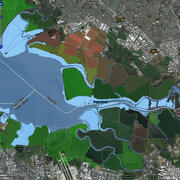