Searching for Evidence of Past Tsunamis in Sediment Cores

Exact timing and size of future earthquake-generated tsunamis cannot be reliably predicted, but scientists can use evidence of past tsunamis to understand how tsunamis behave and assess the hazards they pose to coastal communities.

Tsunamis are waves driven by the forceful displacement of water—such as by undersea earthquakes, landslides, volcanoes, or asteroid impacts—that can travel hundreds of miles per hour, crossing oceans and inundating coasts. Exact timing and size of future earthquake-generated tsunamis cannot be reliably predicted, but scientists can use evidence of past tsunamis to understand how tsunamis behave and assess the hazards they pose to coastal communities.

“Assembling a detailed history of tsunamis can give us an idea of how often they occur in a given area, as well as how large a potential future tsunami might be,” said SeanPaul La Selle, Geologist at the Pacific Coastal and Marine Science Center. One way to assemble this history is by looking for traces of tsunamis in coastal sediments.

By collecting sediment cores from estuaries and coastal lakes and analyzing the cumulative layers, scientists can obtain a geologic record dating back thousands of years. Sometimes these layers contain marine sand and other ocean-derived material, deposited by paleotsunamis that inundated the coast long ago.

For example, a study from Bradley Lake along the southern Oregon coast shows regular layers of muddy sediment laid down over the past 4,600 years, containing decayed freshwater plant material and invertebrates. Every 400 years or so, this pattern is interrupted by a tsunami deposit: a layer of sand and tiny marine organisms, carried in by the wave to settle on the lake bottom. Radiocarbon dating of leaves, seeds, and conifer needles preserved in the sediment provides a precise timeline of these events.

Recent USGS-led coring efforts in Floras Lake and Garrison Lake, just south of Bradley Lake, are exploring how much these coastal lake records vary over a relatively short (22 miles) length of coastline. “Early results demonstrate that the earthquake and tsunami records may differ between each of these lakes,” said La Selle. “The question is whether differences in the settings and environments of these lakes impede preservation of paleoseismic evidence, or if the earthquakes and tsunamis themselves vary in size and frequency along this very short section of the Cascadia Subduction Zone.”

In the year 1700 C.E., a large earthquake originating along the Cascadia Subduction Zone triggered a tsunami that inundated much of the Pacific coast, leaving sandy deposits along low-lying coastal areas from northern California to British Columbia. An earthquake and tsunami of that scale and breadth might occur less often, but shorter ruptures along the southern portion of the Cascadia Subduction Zone occur more frequently, causing tsunamis that may leave their mark in sediment cores.

Evidence of earthquake shaking can also be found offshore, in the form of layered sediments called turbidites. These stirred-up and resettled layers of marine sediment occur when submarine faults rupture, de-stabilizing the substrate and leaving a distinct layer in sediment cores.

“The goal is to corroborate the findings from the lake cores with turbidites found in offshore cores,” said La Selle, citing ongoing work done by USGS colleagues along the Cascadia Subduction Zone. “We’re also comparing the earthquake/tsunami record in the lake cores to the many onshore coastal sites that also have well established records.”

“Studying evidence of these paleotsunamis gives scientists a better understanding of tsunami behavior and can help characterize tsunami risk along the Pacific coast,” said Bruce Jaffe, Research Geologist at the Pacific Coastal and Marine Science Center. “Research to develop the geologic record of paleotsunamis and improve the ability to interpret that record is needed to mitigate tsunami risk in coastal areas across the U.S.” 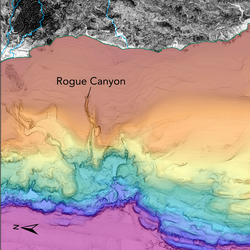 Societal Issue: Uncertainty related to rupture extent, slip distribution, and recurrence of past subduction megathrust earthquakes in the Pacific Northwest (northern CA, OR, WA, and southern BC) leads to ambiguity in earthquake and tsunami hazard assessments and hinders our ability to prepare for future events.
Learn More
link 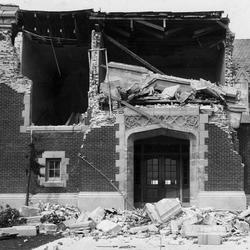 Basic research to develop the geologic record of paleotsunamis and improve the ability to interpret that record is needed to mitigate tsunami risk in the U.S.
Learn More
November 23, 2021

People have been recording seismic activity for centuries. To assemble a detailed earthquake history of an area and understand how faults may behave in the future, however, scientists need to go further back in time—from several hundred to many thousands of years ago.