The potential vulnerability of a particular stretch of coast can be assessed using a conceptual model that scales the impacts of storms on barrier islands.

The impact of a storm on a barrier island is dependent not only on the magnitude of storm characteristics, such as storm surge and waves, but also on the elevation of the barrier island at landfall, such as the line of dunes paralleling the shore that act as the coast's first line of defense. Stretches of coast with very low dunes are potentially more susceptible during storms to extreme coastal change than those with higher dunes.

The potential vulnerability of a particular stretch of coast can be assessed using a conceptual model that scales the impacts of storms on barrier islands (Sallenger, 2000). Within the model, the elevation of storm-induced water levels (Rhigh and Rlow), including storm surge, astronomical tide, and wave runup, are compared to measurements of local dune morphology such as the elevation of the dune crest and toe, (Dhigh and Dlow).

The hurricane-induced water levels (Rhigh and Rlow) are the highest reaches of the waves on the beach during a the storm. By considering these water levels relative to coastal elevations Dhigh and Dlow, the crest and base of the dune, four storm impact regimes can be defined for a specific area of the coast:

Within each of these regimes, the nature and magnitude of coastal change are expected to be unique.

Minimal Impacts of the Swash Regime

Dune Erosion During the Collision Regime

Below are a pair of before and after Hurricane Fran photographs show that the system was in Collision Regime, with significant dune retreat.

Above are cross-sections of lidar data showing dune retreat of 20 meters during Hurricane Dennis (1999).

Impacts of the Overwash Regime

Above are overwash deposits near Rodanthe, North Carolina, after Hurricane Dennis (1999). The sand was transported landward by wave runup overtopping the dune. In both photographs at right, wave runup overtopped the highest part of the system during a storm, resulting in net sand transport landward forming overwash fans.

Catastrophic Impacts of the Inundation Regime

On August 29, 2005, Hurricane Katrina made landfall as a category-3 storm over the Mississippi Delta in Louisiana. This strong storm approached the coast with category-4 strength winds, building large waves and record-levels of storm surge. Aerial video, still photography, and laser altimetry surveys of post-storm beach conditions were collected August 31 and September 1, 2005. Comparisons of post-storm data with earlier surveys were used to show the nature, magnitude, and spatial variability of coastal changes such as beach erosion, overwash deposition, and island breaching.

Louisiana's Chandeleur Islands are an undeveloped, north-south oriented chain of barriers located approximately 110 km east of the city of New Orleans and 70 km east of Katrina's path. These low-lying barrier islands were totally stripped of sand, heavily fragmented by large waves and storm surge, and completely inundated during the storm.

The vulnerability of a barrier island to storm overwash and inundation is determined, in part, by the elevation of the 'first line of defense,' or Dhigh.  On a natural beach system, this is either the first dune ridge or, in the absence of a dune, the beach berm.  For areas that have been heavily engineered with shore-parallel coastal defense structures (e.g. seawalls), the top of the structure becomes the 'first line of defense.' These features, both natural and engineered, act as a first line of defense for inland areas during storms by protecting them from waves and surge.

The spatial variability of the dune crest plays an important role in making some areas of the coast more vulnerable to hurricane-induced coastal change than other areas.  From lidar topographic surveys, detailed measurements of beach topography have been collected along the Nation's coastlines. From these high-resolution surveys, the locations and elevations of Dhigh are measured.

A quantitative method has been developed to extract the location and elevation of Dhigh from lidar surveys. The method follows a set of fixed rules and processes in order to locate Dhigh. This is an objective process, meaning that if it is repeated multiple times, the answers will always be the same.

The complex algorithm is simplified below in order to illustrate the basic principles of this objective technique:

Step 1:  A cross-section of lidar data is extracted from the survey, creating a profile view of the beach and dune.  In order to eliminate small variations in elevation, the profile is mathematically smoothed.

Step 2:  Slope is calculated between adjacent data points across the width of the cross section.  Elevation peaks are identified based on changes in the direction of slope (positive to negative).

In the absence of a dune, Dhigh is located at the berm crest.  The mathematical methods for locating the berm crest are nearly identical.

An alternative, more subjective method for locating the dune crest and toe is based on gridded, digital elevation models of lidar data. In this method, the location of the dune crest and toe are first digitized by a user and then refined using GIS-based algorithms. For more information on that technique, see the following publication:

The maps below illustrate the elevation of Dhigh, or the 'first line of defense,' along the South Atlantic and Gulf coasts.   Extensive spatial variability in elevation can be observed.  Darker red shades indicate relatively low elevations and a corresponding high vulnerability to overwash and inundation.  Lighter red shades indicate high, well-developed dunes and relatively low vulnerability to overtopping and net coastal change.

Graph of the elevations of the dune crest and the dune base along Cape Hatteras National Seashore. The gap in data near the top of the graph corresponds with the position of Oregon Inlet. Note the spatial variability along the coast. Lower first line of defense elevations (red) are vulnerable to overwash and inundation regimes. Coasts with lower dune base elevations (blue) are vulnerable to the collision regime and dune retreat. The dune elevation map to the right of the graph covers the same stretch of the Cape Hatteras National Seashore and the vertical scale of dune elevation corresponds to the North Carolina map.

Map of the 'first line of defense' elevations for the eastern coast of Florida. On the left of the map are histograms showing the distribution of these elevations, one for northeastern Florida, one for east central Florida, and one for southeastern Florida.

Storm surge is the temporary rise in water level due primarily to winds and pressure within a hurricane. In order to use the storm-impact scaling model in a predictive model, the elevation of surge for the five hurricane categories is modeled by the National Hurricane Center using the NOAA SLOSH (Sea, Lake and Overland Surges from Hurricanes) model, a real-time forecast model for hurricane-induced water levels for the Gulf and Atlantic coasts (see figure at right). The numerical model is based on linearized, depth-integrated equations of motion and continuity (Jarvinen and Lawrence, 1985). Changes in maximum surge elevations are forced by time-varying wind-stress and pressure gradient forces which depend on the hurricane's location, minimum pressure, and size measured from the eyewall out to the location of maximum winds (Jarvinen and Lawrence, 1985). The SLOSH model does not incorporate astronomical tides, wave runup or setup; however, astronomical tides are included in the final results (Houston et al., 1999). While the results are location specific, accounting for local water depths, proximity to bays and river, etc., the results are accurate to ± 20% of the calculated value (2004). Error in SLOSH values can also arise from differences between the parametric wind models which force SLOSH and the hurricane's actual wind field (Houston et al., 1999).

Wave runup (R(t)) is the time-varying fluctuation of water-level elevation at the shoreline due to wave breaking (see figure below). Wave setup (η), the time-averaged water level, is the super-elevation of still water at the shoreline, again due to wave breaking. The magnitude of both runup and setup are related to offshore wave period, wave height (H), and foreshore beach slope (β). The elevation of wave runup and setup are calculated from modeled offshore wave conditions using field-data-based empirical parameterizations (Stockdon, et al., 2006). During storm conditions, the wave runup and setup can double the elevation of water levels at the coast beyond that due to storm surge alone. 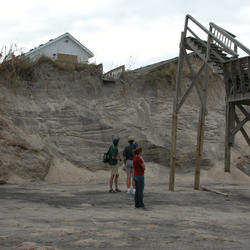 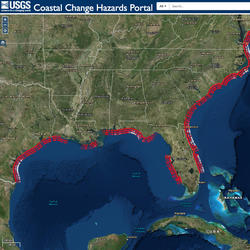 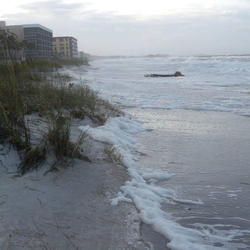 Process studies examine the physical processes at work prior to, during, and following coastal storm events. Understanding the processes involved in coastal landform evolution will improve the accuracy of the assessments of storm-induced coastal change hazards.
By
Natural Hazards, Coastal and Marine Hazards and Resources Program, St. Petersburg Coastal and Marine Science Center
link
January 19, 2018

Process studies examine the physical processes at work prior to, during, and following coastal storm events. Understanding the processes involved in coastal landform evolution will improve the accuracy of the assessments of storm-induced coastal change hazards.
Learn More

Observations of wave runup, setup, and swash on natural beaches

Using shoreline water-level time series collected during 10 dynamically diverse field experiments, an empirical parameterization for extreme runup, defined by the 2% exceedence value, has been developed for use on natural beaches over a wide range of conditions. Runup, the height of discrete water-level maxima, depends on two dynamically different processes; time-averaged wave setup and total swas
January 1, 2003