Clifford Voss was selected as the 2015 Birdsall-Dreiss Distinguished Lecturer by the Geological Society of America. Cliff, an internationally recognized expert in groundwater modeling, has over 35 years of project management, implementation, field work and research experience in groundwater systems. Upon request, Cliff will present general-audience lectures on groundwater or ground ice/permafrost. 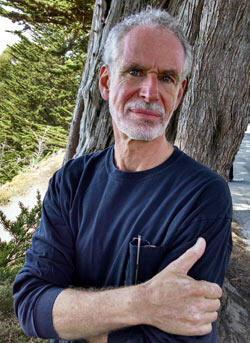 Clifford I. Voss was selected as the 2015 Birdsall-Dreiss Distinguished Lecturer by the Geological Society of America (GSA) Hydrogeology Division. Cliff is a senior scientist with the U.S. Geological Survey (USGS), currently working in Menlo Park, California. Cliff, an internationally recognized expert in groundwater modeling, has over 35 years of project management, implementation, field work and research experience in groundwater systems, including: computer model development and effective model use for scientific evaluation of hydrogeologic systems; groundwater resources development, management and protection; coastal and island groundwater resources subject to seawater intrusion; and use of the subsurface for energy production/storage and toxic waste isolation. Cliff advises extensively on groundwater system evaluation and management and he lectures worldwide on these and related subjects. His scientific interests in hydrogeology include addressing hydrogeologic heterogeneity, physics of solute and energy transport, behavior of fluids with varying density, phase change in geothermal and frozen systems, inverse modeling and network design, and evaluating extensive aquifer systems in light of sparse data.

The practical methodology and models that Cliff and his colleagues developed are now widely used for managing both the quantity and quality of water supply. In particular, the SUTRA computer code, developed and maintained by Cliff and USGS colleagues, has been a standard tool for groundwater resource assessment ever since USGS made it publicly available in 1984. SUTRA has made possible hundreds of practical and research investigations globally since its release.

For more information on Cliff's work and a list of his publications, please visit https://www.usgs.gov/staff-profiles/clifford-i-voss.

HOW TO REQUEST A LECTURE

Upon request, Cliff will present one of the three lectures listed below. All three lectures are appropriate for a general audience with some science background or interest. To request a visit to your institution please use our lecture request form. You can also contact Cliff by email at cvoss@usgs.gov with any questions.

During the 50 years since its development, groundwater flow modeling has become the tool of choice that, when used wisely, provides deep insight into the functioning of aquifer systems that can become a foundation of effective water-resources management. This presentation reviews typical difficulties in characterizing aquifer systems (due to heterogeneity and data scarcity) and argues that simply-structured models are the most-effective means of dealing with inevitable uncertainties. Two examples of simply-structured model analyses of very large aquifer systems with sparse data will be presented. (1) In West Bengal, India, and Bangladesh, dissolved arsenic concentrations exceeding world standards exists in the drinking water of about 50 million people, making this the world's largest groundwater contamination problem. Previous scientific and technological efforts aimed at solving the problem had been largely directed towards understanding the chemistry of arsenic occurrence and release, but this groundwater modeling study is unique in providing a possible region-wide solution to the problem. (2) The Nubian aquifer is the world's largest non-renewable groundwater resource. It is a transboundary aquifer belonging to Chad, Egypt, Libya, and Sudan. International questions regarding resource fate, equitable use of the resource by each country (most current usage is by Egypt and Libya), and adverse impacts of cross-border pumping drawdown on shallow wells and oases were the reason for development of this model as part of a four-country Global Environmental Facility (GEF) project led by the International Atomic Energy Agency (IAEA). Simply-structured model development provided robust answers to these questions, and provided a relatively simple tool that could be adopted and used by water managers in each country.

Difficulties in understanding and managing hydrogeologic systems with variable-density groundwater flow are often due to the common notion that groundwater flow is driven in the direction of decreasing water-table elevation or hydraulic head; i.e. 'downhill'. However, even small variations in groundwater density can drive flow in directions that have no relation to decreasing elevation or head. Groundwater density varies due to spatial or temporal differences in temperature and concentration of dissolved solids. These differences in density can lead to interesting and sometimes unexpected flow patterns. In coastal aquifers, seawater intrusion (and contamination of groundwater supplies) occurs because denser salty sub-sea groundwater pushes laterally inland below less-dense fresh groundwater flowing seaward. Saltwater also occurs above fresher groundwater (in sabkhas, salt ponds, areas of coastal sea incursion) and here, denser saltwater 'falls' downward through the fresher less-dense groundwater, also salinizing the aquifer. Vertical density-driven flow giving rise to natural convection similarly occurs where warmer groundwater exists below cooler water, such as in geothermal, volcanic and ocean-ridge regions. This presentation reviews variable-density groundwater flow phenomena and their importance in practical settings. It is shown that the flow pattern in cases of lateral density differences is rather uniform in comparison with the flow pattern generated by vertical density differences, which exhibits fascinating variety and evolution. Examples of lateral and vertical density-driven flows in coastal aquifers show how modeling variable-density groundwater flow can be used to understand and effectively manage coastal resources.

LECTURE 3: Ground Ice and Permafrost - 'Foundations' of the Hydrology of Cold Regions

As much as one third of the earth's land surface undergoes yearly freezing and one quarter of the earth's land surface is underlain by perennially-frozen ground -- permafrost. There is limited knowledge about the hydrogeology of these dominant cold regions of earth because most human population lives in temperate-climate areas. This knowledge base, cryohydrogeology, is the study of the dynamic interaction of groundwater with freezing and thawing processes. Subsurface ice is a barrier to flow, thus, the pattern of frozen ground is a major control on surface and subsurface water flows. Consequently, ice distribution controls cold-regions hydrology, which in turn affects cold-regions geochemistry and ecology. Motivated by international concern regarding global warming impacts on ground ice distribution and resulting changes to ecosystems, and by the opportunity to study the intriguing hydrological processes mediated by water-ice phase change, recent work by the U.S. Geological Survey and partner institutions have focused on a permafrost region of interior Alaska. This presentation describes some results of that work, including: observed cold-region hydrologic phenomena, efforts to understand the ground ice and water flow mechanisms that control them, and, assessment of likely hydrologic changes resulting from climate evolution. The study produced extraordinary maps of permafrost distribution and thickness (from airborne geophysical surveys), never before obtained for such large regions. The study found that complex inter-related ice-hydrology mechanisms cause surface-water bodies to shrink and expand, and permafrost continuity affects groundwater discharge to rivers (impacting river chemistry). A new model that simulates groundwater flow with heat transport and groundwater freezing and thawing, being finalized as part of the effort, has already allowed evaluations of paleoclimate-change permafrost evolution and of future climate-change scenario impacts on today's permafrost. It is found that groundwater flow and permafrost formation and thaw are strongly-coupled processes; where groundwater flows in cold regions, it accelerates permafrost thaw during climate warming.