Around the world, forests provide timber and other wood products, fuel, flood control, biological diversity, recreation, carbon storage and much more. Part Three of our series looks at how freely available Landsat data provides a way for governments and conservation groups to monitor national laws that have been enacted to protect forests.

This year, Landsat, a space-based Earth observation program conducted jointly by the U.S. Geological Survey and NASA, celebrates a half century of global land surface observations for the good of humanity. Since its inaugural launch on July 23, 1972, an uninterrupted series of Landsat satellites has drawn a comprehensive portrait of Earth that has enabled scientists and analysts around the globe to detect and monitor critical changes to the Earth’s land surfaces, surface waters, and coastal regions.

One crucial type of land change is the ongoing, widespread alteration in global forests. A changing climate adds further complexity to government and commercial decisions about how to manage, protect, and sustain forest resources.

Throughout the ages, trees have inspired humans in many ways.  What sight is more welcome than a tree in the desert? What poem more lovely than a tree? The imagery of trees forms the basis of many common language expressions, such as strong as an oak, root and branch, and made in the shade. Trees have played a central role in human culture, historical events, and many religious traditions, because our ancestors intuitively recognized how vital they are to human existence.

Today trees remain vitally important in many ways. Around the world, people rely on forests for timber and other wood products, fuel, flood control, biological diversity, recreation, and much more. One less obvious benefit of forests has only been appreciated in recent decades: carbon storage.

To grow, a tree needs water, sunlight, minerals, and carbon dioxide. During photosynthesis, a tree will convert these ingredients into sugars that feed it, fueling its growth. In one year, a mature live tree can absorb more than 48 pounds of carbon dioxide out of the atmosphere. Carbon is stored in its fibers until the tree or wood experiences a physical event that releases it into the atmosphere, like fire or decomposition. Trees hold carbon, both while they grow and after they are harvested to build the homes of tomorrow.

Forests cover nearly one-third of the land globally, according to the United Nations Food and Agriculture Organization. The world has a total forest area of 4.06 billion hectares (15.7 million square miles), 31 percent of its total land area. This immense forested area is equivalent to 0.52 hectare (1.3 acres) per person, although, forests are not distributed equally among the world’s nations or population. Tropical regions have the largest proportion of the world’s forests (45 percent). More than half (54 percent) of the world’s forests is found in only five countries – the Russian Federation, Brazil, Canada, the United States, and China.

The annual report by the World Resources Institute, in collaboration with the Global Land Analysis and Discovery laboratory at the University of Maryland, found that tropical regions lost 9.3 million acres of primary old-growth forest in 2021. That loss added 2.5 billion metric tons of carbon dioxide emissions in to the atmosphere. That amount is about two and a half times as much as emitted by passenger cars and light trucks in the United States each year. By far, the largest share of forest loss occurred in Brazil, accounting for more than 40 percent of the world total. The Democratic Republic of Congo and Bolivia ranked second and third in this category.

According to the report, the annual rate of primary tropical forest loss has been stubbornly consistent recently. Though the tropics lost 11% less primary forest in 2021 than in 2020, that followed a 12% increase from 2019 to 2020, mostly due to an increase in fire-related loss. Boreal forests — mainly those in Russia — experienced unprecedented tree cover loss in 2021, largely driven by fires.

Most forest loss in the tropics is linked to agriculture or other activities, like mining. Forests are clear cut and often burned, and these fires can grow out of control, adding to the devastation. While this clearing provides short-term agricultural or economic benefit to local residents, the resulting tree losses have other harmful effects.

The Landsat program has supplied continuous, objective data about the Earth since 1972. Landsat images are routinely used by scientists, resource managers, and business people to track water quality, glacier recession, coral reef health, land-use change, forest conditions, and agriculture. Through their continuous monitoring, Landsat satellites can produce images over time that reveal stark changes in forests, such as illegal timber harvesting or wildfires, and more subtle changes, such as forest diseases, insect infestations, and species relocation.

Since the 1980s, when improved sensors came on board, Landsat satellites have regularly collected land surface data at a 30-meter spatial resolution, approximately the size of a baseball infield. This resolution provides appropriate information to support the landscape-scale analysis required for forest management. Because the complex sensors onboard Landsat satellites can see spectral ranges of light far beyond what the human eye can, they are able to measure the varying wavelengths of light reflected by healthy or diseased trees. This information helps authorities monitor forest growth and manage forest health.

Landsat images can reveal quite subtle changes. While satellite monitoring is no less important in highly visual cases of timber harvesting or wildfire, the early stages of the destruction brought to forests by disease or insects may not be recognized by human observers. Pine forests under siege by beetles, for example, can die a slow death. Documenting such trends can be difficult, depending on whether the trees number a handful or in the thousands. Even though aerial photography and field observations might find some of the tree damage, large-area revelations come to light because of Landsat’s ability to methodically monitor forests year after year.

In 2013, Dr. Matthew Hansen and several colleagues at the University of Maryland used data exclusively from the Landsat 7 satellite to produce the first global, high-resolution maps of tree growth and disappearance around the globe. The uniform data from more than 650,000 scenes, spanning the years 2000–2012, ensured a consistent global perspective across time, national boundaries, and regional ecosystems.

"This global perspective was only feasible with the existence of free Landsat data,” said Dr. Hansen in a 2013 interview with USGS. “Landsat represents a public good, Earth-observation infrastructure that allows everyone to study their respective land resources and their change over time.”

The initial 2013 map by Hansen et al has been updated to the present and continues through the Global Land Analysis and Discovery laboratory at the University of Maryland. All Landsat imagery and data were made free and open to the public in a policy announced by USGS in 2008.

With current and historical Landsat data available at no cost, many non-profit organizations around the globe use Landsat as a tool to identify areas that are especially important for conservation. For example, the African Wildlife Foundation (AWF) used Landsat data in the Democratic Republic of the Congo (DRC) to establish the extent of a land corridor where wildlife travel between two large nature reserves. The AWF identified the corridor as a critical area for conservation and began working with the DRC government and local communities to map the region. The process had significant impact on land use planning and zoning in the area. (NASA video)

The ability of governments and other organizations around the globe to use Landsat data is a factor in reducing the deforestation that might otherwise occur. Freely accessible, transparent, internationally recognized Landsat data provides a way for governments and conservation groups to monitor national laws that have been enacted to protect forests. Landscape changes brought about by major agricultural industries, such as palm oil and soybean plantations, can be tracked reliably with satellite remote sensing. If warranted, the evidence of illegal practices can be publicized and presented to a court of law.

The broad availability of trusted information about global forests has been facilitated by Landsat, but the final responsibility for effectively preserving them lies in the political realm. With a historical perspective of five decades, with sensors focused at a “just-right” moderate resolution for forest monitoring, and with its policy of no-cost data availability, the Landsat program has served for many years as a watchful guardian of vital forests around the world. It is ready to continue that role far into the future.

The Landsat Program, a joint mission of the U.S. Geological Survey and NASA, has provided continuous global coverage of landscape change since 1972. Landsat’s unique long-term data record provides the basis for a critical understanding of environmental and climate changes occurring in the United States and around the world.

Landsat Sets the Standard for Maps of World's Forests (NASA)

In case you missed it

Parts 1 and 2 of the Six-Part Series Highlighting the 50th Anniversary of Landsat: 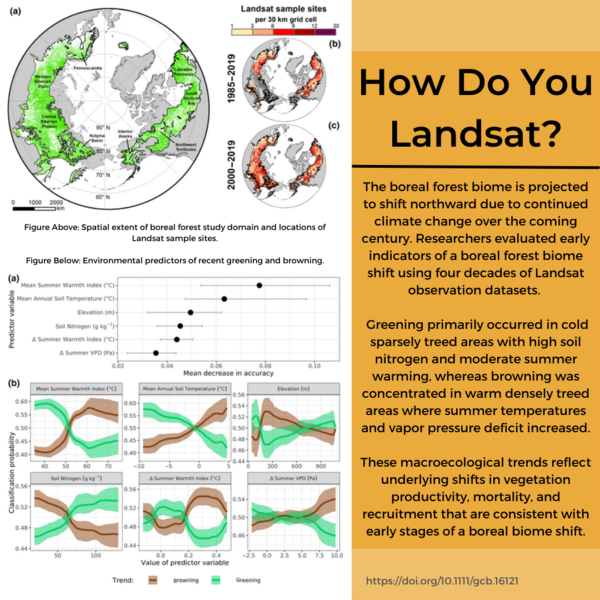 SummaryThe Landsat program is a joint effort between the U.S. Geological Survey (USGS) and the National Aeronautics and Space Administration (NASA), but the partner agencies have distinct roles. NASA develops remote-sensing instruments and spacecraft, launches satellites, and validates their performance in orbit. The USGS owns and operates Landsat satellites in space and manages their data transmi
By
Communications and Publishing
July 12, 2016

In western North America, where infestations of mountain pine beetles continue to ravage thousands of acres of forest lands, Landsat satellites bear witness to the onslaught in a way that neither humans nor most other satellites can see.
By
Earth Resources Observation and Science Center, Earth Resources Observation and Science (EROS) Center , Landsat Missions
November 1, 2013

Quantification of global forest change has been lacking despite the recognized importance of forest ecosystem services. In this study, Earth observation satellite data were used to map global forest loss (2.3 million square kilometers) and gain (0.8 million square kilometers) from 2000 to 2012 at a spatial resolution of 30 meters. The tropics were the only climate domain to exhibit a trend, with f
By
Earth Resources Observation and Science Center, Earth Resources Observation and Science (EROS) Center
link
June 23, 2022

In 2022, the Landsat series of satellites, a program conducted jointly by the U.S. Geological Survey and NASA, celebrates a half century of worldwide...

“We’re seeing the loss of forests in many places,” said Matthew Hansen, a professor at the University of Maryland. “Dynamics include increasing...