Why do some earthquakes trigger large tsunamis, and others don’t? Learn how earthquakes produce tsunamis, how scientists predict tsunami size and arrival times, and the differences in two recent small tsunamis.

One of the largest earthquakes ever recorded along Mexico’s south coast struck just before midnight, local time, on September 7, 2017. Centered about 100 kilometers (60 miles) off the coast of the state of Chiapas, the magnitude 8.2 quake killed nearly 100 people and caused widespread damage (see “M 8.2 - 101km SSW of Tres Picos, Mexico”). The temblor also triggered a tsunami that reached the Pacific shores of Mexico and Guatemala and was detected as far away as Hawaiʻi and New Zealand.

Even though the tsunami crossed the Pacific Ocean, it “was smaller than we would expect from the magnitude of the earthquake,” said USGS geophysicist Eric Geist. Tide gauges showed wave heights of 1.2 meters (4 feet) at Salina Cruz, and 1.7 meters (5.5 feet) at Puerto Chiapas, with most of the damage confined to a small boat harbor there.

Nearly five months later, something similar happened in Alaska. Just after midnight on January 23, 2018, a magnitude 7.9 earthquake occurred beneath the Pacific Ocean about 280 kilometers (175 miles) southeast of Kodiak Island (see “Magnitude 7.9 Earthquake Gulf of Alaska”). The National Oceanic and Atmospheric Administration (NOAA) issued a tsunami warning for Alaska and Canada, and a tsunami watch for Washington, Oregon, and California. Sirens wailed in Alaskan coastal communities, cell phones sounded emergency alerts, and numerous residents fled to higher ground. A few hours later, coastal tide gauges and deep-ocean tsunami detectors had recorded waves less than a foot high and the alerts were canceled. Neither the shaking nor the tsunami caused serious damage, and what might have been a disaster had become a drill.

Both tsunamis could have been much larger. Why weren’t they?

“To generate a significant tsunami,” said Geist, “an earthquake needs to meet three criteria: First, the part of the fault that breaks needs to be at least partly underneath the ocean; typically, the deeper the water, the bigger the tsunami waves.” Second, the earthquake must permanently move large areas of the seafloor up and down—the bigger the movement and area, the bigger the tsunami. Finally, longer and wider fault breaks create larger magnitude earthquakes, which trigger more destructive tsunamis.

“Most tsunamis are generated at subduction zones, where one tectonic plate dives beneath another,” said Geist. “And the most devastating ones, like the 2004 Indian Ocean and 2011 Japan events, typically result from large-magnitude earthquakes on the interplate thrust”—the fault that separates the two plates. (View a diagram of a subduction zone.)

It’s easy to imagine a large earthquake on an interplate thrust fault, which might be hundreds of miles long and wide.

That’s what happened in 2004 off the coast of Sumatra, Indonesia. A magnitude 9.1 earthquake broke an area of the interplate thrust fault that was 1,300 km (800 miles) long by 150 km (93 miles) wide, triggering a tsunami that killed about 250,000 people around the Indian Ocean (see “M 9.1 - off the west coast of northern Sumatra”). The devastating 2011 Japanese tsunami also started with a magnitude 9.1 earthquake on the thrust fault between a subducting and an overriding plate (see “M 9.1 - near the east coast of Honshu, Japan”). Both earthquakes pushed large areas of the seafloor higher and lower, the way opening a horizontal fist simultaneously raises your fingertips and lowers your knuckles. These motions moved very large quantities of seawater, creating a series of catastrophic tsunami waves.

The story was slightly different for a tsunami that hammered Samoa, American Samoa, and Tonga in 2009 (see “Preliminary Analysis of the September 29, 2009 Samoa Tsunami, Southwest Pacific Ocean”). It was generated by a magnitude 8.1 earthquake seaward of the trench—the place on the seafloor where the two plates meet (see diagram). Because the quake was close to the surface, there was a large movement of the seabed and the water above it.

This earthquake was on a normal fault, where rocks on one side of the fracture drop down. (Watch a normal fault animation.) It triggered a pair of large aftershocks on the interplate thrust, which are thought to have contributed to the tsunami (https://news.ucsc.edu/2010/08/3979.html). According to Geist, however, “most of the tsunami energy came from the outer-rise normal fault earthquake.” The Samoa earthquake was one of a few normal-fault earthquakes that have caused deadly tsunamis (see “Samoa Disaster Highlights Danger of Tsunamis Generated from Outer-Rise Earthquakes”).

Let’s look at the factors that made the recent earthquakes in Mexico and Alaska different from these earlier events.

The Chiapas earthquake occurred in the Middle America subduction zone, where the Cocos oceanic plate dives beneath Central America.

Like the 2009 Samoa temblor, the Chiapas quake occurred not on the interplate thrust but on a normal fault in the oceanic plate. It was slightly larger than the Samoa earthquake; in fact, at magnitude 8.2, the Chiapas event was one of the largest normal fault earthquakes ever recorded. But it was landward of the trench and much deeper than the Samoa earthquake. It produced less movement of the seafloor and a much smaller tsunami. In both Chiapas and Samoa, the normal faults most likely developed from tension (pulling apart) stresses caused by gravity bending and dragging the oceanic plate into the Earth.

In contrast to the Samoa event, the Chiapas earthquake broke beneath a region of shallow water of the continental shelf. Tsunami waves grow higher and steeper as they move from deep water into shallower water. The deeper the water where they start, the more their heights increase as the waves approach the shore. That’s another reason why the Samoa earthquake, centered under much deeper water, produced a larger tsunami than the Chiapas quake.

The Kodiak earthquake occurred in deep water seaward of the Aleutian subduction zone (see map and diagram, below), but it was on a third type of fault: a strike-slip fault. The movement on such faults is mainly horizontal and does not produce much vertical movement of the seabed. The Great San Francisco Earthquake of 1906, for example, occurred on the strike-slip San Andreas fault. Although it was a very large earthquake, it produced a tsunami that measured just 10 centimeters (6 inches) at a San Francisco Bay tide gauge station (see “Analysis of the tsunami generated by the Mw 7.8 1906 San Francisco earthquake,” by Geist and Zoback, Geology (1999) vol. 27, no. 1, p. 15-18).

Immediately after the January 2018 earthquake off Kodiak, it was not clear what kind of fault had slipped. The earthquake’s high magnitude (initially estimated at 8.0 and later revised to 7.9) and its location near coastal communities prompted NOAA’s National Tsunami Warning Center to issue alerts for Alaska, Canada, and the U.S. west coast. As scientists analyzed the seismograph data, they quickly realized that the quake had occurred on a strike-slip fault—their first hint that the tsunami danger might not be as serious as feared. A few hours later, when measurements from coastal tide gauges and deep-ocean tsunami detectors had reported tsunami wave heights of less than 1 foot, the alerts were cancelled.

The animations show that a tsunami wave reflected off the edge of the continental shelf and returned to shore. Reflected and “coastal-trapped” waves continued striking the coast many hours after the first wave (see “Life of a Tsunami).”

These simulations show how the earthquake’s characteristics (the amount and direction of movement on the fault, for example) affected the resulting tsunami and its impact on the nearby coast. Similar computer models can predict how fast tsunami waves will cross the ocean and reach distant shores. Immediately after a large undersea earthquake, NOAA scientists use the magnitude and epicenter to simulate the likely tsunami, then fine-tune the model with actual wave measurements from deep-ocean tsunami detectors. The size and arrival time of distant tsunamis can now be projected with life-saving accuracy; NOAA’s National Weather Service uses those predictions for tsunami alerts. Unfortunately, local tsunamis, triggered by a nearby earthquake, often arrive too fast for calculations and alarms. The strong shaking from an earthquake itself is the best warning.

“If you feel strong shaking at the coast,” said Geist, “head for higher ground.”

USGS scientists study many aspects of tsunamis—from field studies of recent and ancient tsunamis to computer modeling and forecasting—all of which can help us better prepare for these rare but destructive events.

Explore the links below to learn more:

“Some Coastal Communities May Not Have Time for Tsunami Evacuation”

“Tsunami and Earthquake Research at the USGS”

“Probabilistic Forecasting of Earthquakes, Tsunamis, and Earthquake Effects in the Coastal Zone” 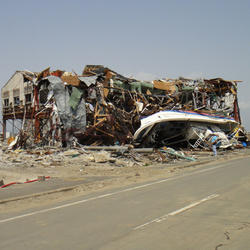 Preliminary simulations of the 2011 Japan tsunami

Preliminary simulations of the 2011 Japan tsunami 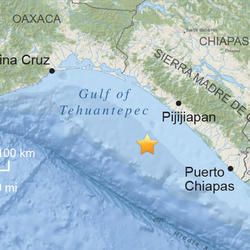 Preliminary simulation of the 2017 Mexico tsunami

Preliminary simulation of the 2017 Mexico tsunami 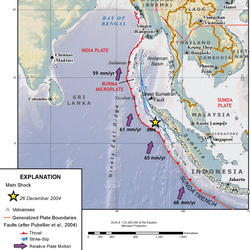 The December 26, 2004 magnitude (M) 9.1 Sumatra-Andaman earthquake occurred along a tectonic subduction zone in which the India Plate, an oceanic plate, is being subducted beneath the Burma micro-plate, part of the larger Sunda plate. The boundary between the downgoing and overriding plates of the subduction zone is marked by the Sunda Trench above. Here we provide a brief overview of the tectonic...
By
Natural Hazards, Coastal and Marine Hazards and Resources Program, Pacific Coastal and Marine Science Center
link
October 8, 2018

The December 26, 2004 magnitude (M) 9.1 Sumatra-Andaman earthquake occurred along a tectonic subduction zone in which the India Plate, an oceanic plate, is being subducted beneath the Burma micro-plate, part of the larger Sunda plate. The boundary between the downgoing and overriding plates of the subduction zone is marked by the Sunda Trench above. Here we provide a brief overview of the tectonic...
Learn More
link 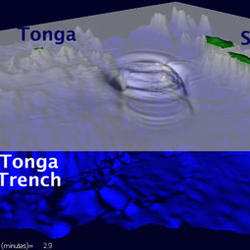 Preliminary Analysis of the 2009 Samoa Tsunami

The tsunami that was triggered by a magnitude 8.1 earthquake on September 29, 2009, caused significant damage and loss of life on Samoa, American Samoa, and Tonga. In the hopes that disasters such as this can be minimized in the future, we attempt to understand the mechanism and impact of this tsunami. The information presented here is focused on geologic aspects of the disaster.
By
Natural Hazards, Coastal and Marine Hazards and Resources Program, Pacific Coastal and Marine Science Center
link
December 1, 2009

Preliminary Analysis of the 2009 Samoa Tsunami

The tsunami that was triggered by a magnitude 8.1 earthquake on September 29, 2009, caused significant damage and loss of life on Samoa, American Samoa, and Tonga. In the hopes that disasters such as this can be minimized in the future, we attempt to understand the mechanism and impact of this tsunami. The information presented here is focused on geologic aspects of the disaster.
Learn More
link
January 30, 2018

One week ago, on January 23rd at 12:31 a.m. local time, Alaskans were rocked by a magnitude 7.9 earthquake, with an epicenter in the Gulf of Alaska...