In August 2018, the USGS Coastal/Marine Hazards and Resources Program (CMHRP) completed the Mid-Atlantic Resource Imaging Experiment (MATRIX), a three-week cruise that acquired more than 2,000 kilometers of multichannel seismic data between Hudson Canyon and Cape Hatteras on the U.S. Atlantic margin.

This article is part of the October-November 2018 issue of the Sound Waves newsletter.

In August 2018, the USGS Coastal/Marine Hazards and Resources Program (CMHRP) completed the Mid-Atlantic Resource Imaging Experiment (MATRIX), a three-week cruise that acquired more than 2,000 kilometers of multichannel seismic data between Hudson Canyon and Cape Hatteras on the U.S. Atlantic margin. MATRIX was led by the USGS Gas Hydrates Project and sponsored by the USGS, the U.S. Department of Energy, and the Bureau of Ocean Energy Management (BOEM).

The primary goal of MATRIX was to delineate the distribution of gas hydrates across areas identified by BOEM as possibly hosting gas-hydrate accumulations. Gas hydrate is an ice-like combination of methane gas and water that forms naturally in seafloor sediments at the intermediate pressures and relatively low temperatures common on continental margins.  Globally, gas hydrate sequesters large amounts of methane.  The USGS Gas Hydrates Project, which is jointly managed by CMHRP and the USGS Energy Resources Program, led the MATRIX cruise and has for decades partnered with other federal agencies to investigate the energy resource potential of gas hydrate, its role in submarine landslides, and its interactions with the environment.

MATRIX filled a gap in modern seismic data on the U.S. Mid-Atlantic margin, acquiring 12 primary seismic lines. Half of these ran from the upper continental slope to more than 3,000 meters of water depth (dip lines); the other half were oriented parallel to the coastline at upper-continental slope or deep-water locations (strike lines). The MATRIX data image 1 to 3 kilometers (km) below the seafloor, making them useful for the analysis of many features besides gas hydrates. For example, the MATRIX cruise acquired data across the head of the Currituck submarine slide, which has been extensively studied by CMHRP researchers; imaged the geologic structure and gas distribution beneath some of the hundreds of methane seeps discovered on the upper-continental slope in this area since 2012; and mapped basement and important stratigraphic markers for correlation with the Extended Continental Shelf data collected by the USGS in 2014 and 2015.

Before the MATRIX program commenced, officials from the sponsoring agencies and the U.S. Department of the Interior (DOI) toured the research vessel (R/V) Hugh R. Sharp in Lewes, Delaware, to observe USGS preparations for the cruise.  The visitors included Ryan Nichols, Advisor to the Office of Water and Science at DOI; Walter Cruickshank, Acting Director of BOEM; Renee Orr, Chief of the BOEM Office of Strategic Resources; Matt Frye, Chief of the BOEM Resource Evaluation Methodologies Branch; and John Haines, Program Coordinator for the USGS CMHRP. U.S. Department of Energy visitors were Timothy Reinhardt, Director of the Supply and Delivery Division in the Office of Oil and Natural Gas, and Gabriela Intihar, a Senior Program Manager in the same group.  The officials met with USGS scientists and Jon Swallow, the director of marine operations at the University of Delaware, to review MATRIX research goals and the capabilities of the ship.

To generate seismic energy, MATRIX used two to four airguns (total volume as large as 420 cubic inches) powered by four portable compressors . This is the largest airgun source used on a USGS-managed cruise since the San Francisco Bay BASIX surveys in the 1990s. The airguns for MATRIX were provided by the Lamont-Doherty Earth Observatory (LDEO), Scripps Institute of Oceanography (SIO), and the USGS and were operated by Daniel Powers, Peter Dal Ferro, and Jenny McKee from the Pacific Coastal and Marine Science Center (PCMSC). Contract technician Ray Hatton maintained the compressors with assistance from PCMSC operational staff.  CMHRP conducted a substantial permitting process with the National Marine Fisheries Service to ensure compliance with the Marine Mammal Protection Act and the Endangered Species Act during use of airgun seismic sources.  Three contracted protected species observers monitored marine species during the survey.

To receive the seismic signals, MATRIX deployed a string of up to 160 hydrophone channels in a streamer up to 1.2 km long. The last deployment of streamer longer than 1 km on a USGS-managed cruise was in the 1990s off California. The MATRIX streamer was a combination of SIO and USGS sections. Eric Moore, Emile Bergeron, and Alex Nichols from WHCMSC primarily supported streamer operations and data acquisition during the cruise.  Moore also managed overall MATRIX logistics and devised a method to control the airguns to discharge at even distance, instead of time, intervals, thereby improving data quality.

MATRIX also deployed 60 sonobuoys to receive seismic signals at distances up to 15 km from the airguns and to transmit the data back to the ship. Daniel Powers, Tim Elfers, and Cordell Johnson at PCMSC built the sonobuoy launchers based on engineering plans provided by LDEO.

Patrick Hart (PCMSC) and Tom O’Brien (WHCMSC) were unable to participate in the cruise, but provided critical technical support. Hart identified appropriate compressors, and O’Brien collaborated with Bergeron on building a GPS-tracked tail buoy for the streamer. Kolby Pedrie from the SIO technical support group also sailed aboard the R/V Sharp, assisting with the streamer, airguns, and data-acquisition components of MATRIX.

Chief Scientists for MATRIX were Carolyn Ruppel (WHCMSC), who leads the USGS Gas Hydrates Project, and Nathan Miller (WHCMSC) from the Marine Geohazards Project. Wayne Baldwin (WHCMSC) served as Co-Chief Scientist on the second leg, in addition to carrying out his normal duties with data acquisition and processing. Owing to the efforts of Miller, Baldwin, and Dave Foster (WHCMSC), preliminary processing of the MATRIX data was completed aboard the ship. BOEM scientists Bill Shedd and Stephen Palmes also participated in the MATRIX cruise, assisting with data interpretation and providing context about the legacy seismic data (mostly collected by the USGS in the 1970s and 1980s) that were used by BOEM to delineate possible gas hydrate accumulations. 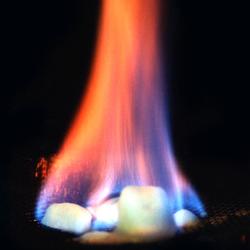 The USGS Gas Hydrates Project has been making contributions to advance understanding of US and international gas hydrates science for at least three decades. The research group working on gas hydrates at the USGS is among the largest in the US and has expertise in all the major geoscience disciplines, as well as in the physics and chemistry of gas hydrates, the geotechnical properties of hydrate...
Learn More
link 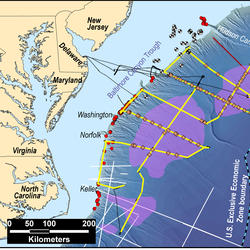 In late August 2018, scientists and technical staff from the USGS Coastal and Marine Hazards and Resources Program completed the acquisition of over 2000 km of multichannel seismic (MCS) data as part of the Mid-Atlantic Resource Imaging Experiment (MATRIX) conducted aboard the R/V Hugh R. Sharp. The seismic program was led by the USGS Gas Hydrates Project and was sponsored by the USGS, the U.S...
Learn More
January 17, 2018

Gas hydrate is a naturally occurring, ice-like substance that forms when water and gas combine under high pressure and at moderate temperatures. Methane is the most common gas present in gas hydrate, although other gases may also be included in hydrate structures, particularly in areas close to conventional oil and gas reservoirs. Gas hydrate is widespread in ocean-bottom sediments at water depths
By
Woods Hole Coastal and Marine Science Center
January 17, 2018

The Gas Hydrates Project at the U.S. Geological Survey (USGS) focuses on the study of methane hydrates in natural environments. The project is a collaboration between the USGS Energy Resources and the USGS Coastal and Marine Geology Programs and works closely with other U.S. Federal agencies, some State governments, outside research organizations, and international partners. The USGS studies the f
By
Woods Hole Coastal and Marine Science Center
January 1, 2003

As of the time of this writing, the San Francisco Bay region is home to about 6.8 million people, ranking fifth among population centers in the United States. Most of these people live on the coastal lands along San Francisco Bay, the Sacramento River delta, and the Pacific coast. The region straddles the tectonic boundary between the Pacific and North American Plates and is crossed by several str
By
Natural Hazards, Earthquake Hazards, Earthquake Science Center