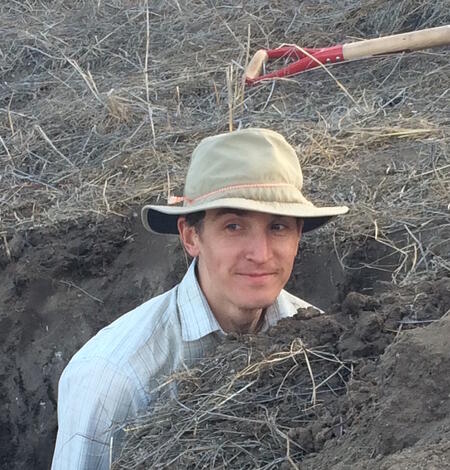 I am a Research Geologist interesested in understanding how processes of erosion and faulting interact to shape Earth’s surface. I study these phenomena through geologic maps, laboratory techniques that measure the history of rocks being exhumed toward the surface, and with measurements and models of Earth's surface topography.

I came to the USGS as a Mendenhall Postdoctoral Fellow in 2016 to study landscape evolution in the Southern Rocky Mountains and to help complete a facility for measuring the cooling histories of minerals as part of the Mineral Resources Program. In 2018 I transitioned to a job as a Research Geologist funded by the National Cooperative Geologic Mapping program, where I work now. In this capacity I conduct regional-scale geologic mapping and synthesis of Quaternary sedimentary deposits with the goal of ultimately establishing a seamlesss national-scale geologic map database that can aid in the characterization of geologic hazards and natural resources.  This work is currently focused in two regions, in Arkansas and in a large transect spanning the Intermountain West, for which I also serve as the lead of the surficial geologic working group.

In addition to these roles I conduct research into the mechanisms of landscape evolution in an effort to better interpret the geologic record of natural hazards and past environmental change, focusing on two broad classifications of problems.  First, I seek to develop numerical and statistical models to refine geologic inferences made from geochronologic data and to quantify uncertainty in those interpretations.  Second, I try to understand the connection between earth surface processes, landscape form, and recent geologic deposits by developing numerical models that enable simulation of these phenomena.  In these efforts I am interested in developing approaches for characterizing landscape evolution through paired analysis of topographic and geologic map data.

Prior to starting at the USGS I obtained my PhD from Stanford University in 2016, where I studied how sediment transport and erosion processes shaped hillslopes and river networks, and how some micro-climatic gradients enduced by aspect differences influenced these processes. In 2011 I obtained my MSc from UC Santa Cruz, where I had also obtained my BS a few years earlier. It was at UC Santa Cruz that I first got excited about geologic mapping and where I developed an interest in using low-temperature thermochronology to study histories of faulting. 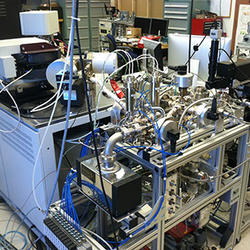 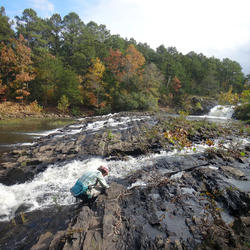 The Ozark Dome-Arkoma Basin-Ouachita Transect (ODABOuT) project examines the three-dimensional geology of a transect of the southern orogenic margin of North America in its best surface exposure in western Arkansas. The Ozark Dome and Arkoma Basin represent a foreland uplift and foreland basin that formed as a result of the impinging Ouachita orogenic belt. Understanding the geometry and evolution...
By
Geosciences and Environmental Change Science Center
link
October 21, 2019

The Ozark Dome-Arkoma Basin-Ouachita Transect (ODABOuT) project examines the three-dimensional geology of a transect of the southern orogenic margin of North America in its best surface exposure in western Arkansas. The Ozark Dome and Arkoma Basin represent a foreland uplift and foreland basin that formed as a result of the impinging Ouachita orogenic belt. Understanding the geometry and evolution...
Learn More
link 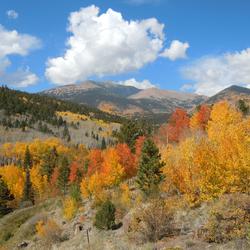 Geologic Framework of the Intermountain West

The Geologic Framework of the Intermountain West project was launched with the goal of producing a new digital geologic map database and 3D geologic model of a transect from the Rio Grande rift to the Basin and Range, based on a synthesis of existing geologic maps with new targeted new mapping, subsurface data, and other data sets. This database will integrate disparate map data, resolve...
By
Geosciences and Environmental Change Science Center
link
October 4, 2019

Geologic Framework of the Intermountain West

The Geologic Framework of the Intermountain West project was launched with the goal of producing a new digital geologic map database and 3D geologic model of a transect from the Rio Grande rift to the Basin and Range, based on a synthesis of existing geologic maps with new targeted new mapping, subsurface data, and other data sets. This database will integrate disparate map data, resolve...
Learn More
September 25, 2020 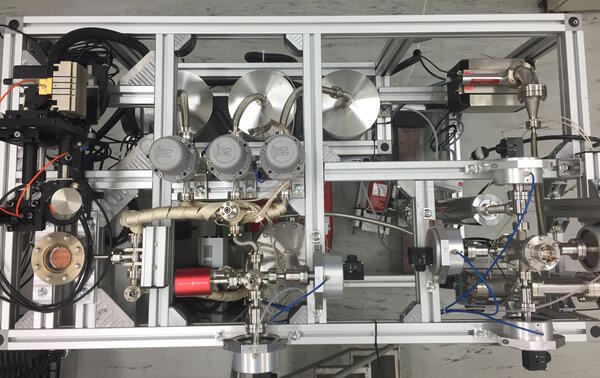 Continental shelves as detrital mixers: U-Pb and Lu-Hf detrital zircon provenance of the Pleistocene–Holocene Bering Sea and its margins

Coastal erosion, including sea-cliff retreat, represents both an important component of some sediment budgets and a significant threat to coastal communities in the face of rising sea level. Despite the importance of predicting future rates of coastal erosion, few prehistoric constraints exist on the relative importance of sediment supplied by coastal erosion versus rivers with respect to past sea
By
Geosciences and Environmental Change Science Center
July 8, 2021

Sedimentary deposits constitute the primary record of changing environmental conditions that have acted on Earth’s surface over geologic time. Clastic material is eroded from source locations (parents) in sediment routing systems and deposited at sink locations (children). Both parents and children have characteristics that vary across many different dimensions, including grain size, chemical comp
By
Geosciences and Environmental Change Science Center
July 7, 2021

As zircon U-Pb geochronology has become a leading method in sediment provenance studies and basin analysis over the past 20 years, the volume of detrital zircon data made available in published literature has enabled researchers to go beyond source-to-sink provenance studies to explore increasingly complex geologic problems. In this review, we utilize the growing body of detrital zircon data acqui
By
Geosciences and Environmental Change Science Center, Geology, Geophysics, and Geochemistry Science Center
June 30, 2021

The San Gabriel and Canton faults represent early stages in the development of the San Andreas fault system. However, questions of timing of initiation and magnitude of slip on these structures remain unresolved, with published estimates ranging from 42-75 km and likely starting in the Miocene. This uncertainty in slip history reflects an absence of appropriate piercing points. We attempt to bette
By
Geosciences and Environmental Change Science Center
July 8, 2020

The grass is not always greener on the other side: Seasonal reversal of vegetation greenness in aspect-driven semiarid ecosystems

Our current understanding of semiarid ecosystems is that they tend to display higher vegetation greenness on polar-facing slopes (PFS) than on equatorial-facing slopes (EFS). However, recent studies have argued that higher vegetation greenness can occur on EFS during part of the year. To assess whether this seasonal reversal of aspect-driven vegetation is a common occurrence, we conducted a global
By
Geosciences and Environmental Change Science Center
February 7, 2020

Timing of Cenozoic extension in the southern Stillwater Range and Dixie Valley, Nevada

The Dixie Valley fault bounds the east side of the Stillwater Range in west‐central Nevada and last ruptured in 1954. Offset basalts indicate that slip began more recently than ~14 Ma, and prior work has interpreted the southern segment as an active low‐angle normal fault. Oligocene igneous rocks in the southern Stillwater Range were steeply tilted during large‐magnitude extension prior to ~14 Ma.
By
Geosciences and Environmental Change Science Center
February 6, 2020

Transform faults are known to have anomalously low rates of seismicity, but no direct observations reveal why this is the case. We use new, autonomous underwater vehicle high-resolution seafloor mapping to image the morphology of and offsets along transform fault segments in the Gulf of California. Fault splays display a varied history of activation and deactivation of individual fault strands o
By
Geosciences and Environmental Change Science Center
January 24, 2020

Dilution and propagation of provenance trends in sand and mud: Geochemistry and detrital zircon geochronology of modern sediment from central California (U.S.A.)

Integrated, multi-method provenance studies of siliciclastic sedimentary deposits are increasingly used to reconstruct the history of source-to-sink transport, paleogeography, and tectonics. Invariably, analysis of large-scale depositional systems must confront issues regarding how to best sample the system and adequately cope with the details of sediment mixing. Potential biases including variat
By
Geosciences and Environmental Change Science Center
April 5, 2019

With the increasing use of detrital geochronology data for provenance analyses, we have also developed new constraints on the age of otherwise undateable sedimentary deposits. Because a deposit can be no older than its youngest mineral constituent, the youngest defensible detrital mineral age defines the maximum depositional age of the sampled bed. Defining the youngest `defensible' age in the fac
By
Geosciences and Environmental Change Science Center
March 21, 2019

A supervolcano and its sidekicks: A 100 ka eruptive chronology of the Fish Canyon Tuff and associated units of the La Garita magmatic system

Establishing temporal constrains on major volcanic eruptions is limited by the precision of existing geochronometers. Prior work on the La Garita caldera, created by the eruption of the Fish Canyon Tuff, failed to resolve temporal differences between pre-, syn-, and post-collapse eruptive units. Here, we report 40Ar/39Ar geochronologic data supporting a ca. 100 ka eruptive history of the La Garita
By
Geology, Geophysics, and Geochemistry Science Center, Geosciences and Environmental Change Science Center
October 25, 2018

On active alluvial fans, debris-flow deposits and frequent avulsions produce a rough topographic surface. As is the case in many initially rough landforms produced by catastrophic processes, the topography of alluvial fans is progressively smoothed, producing textural differences useful in establishing relative age criteria for fans. Here, we outline an approach for defining a quantitative, numeri
By
Geosciences and Environmental Change Science Center, Geology, Geophysics, and Geochemistry Science Center