The eyes of the world have fixed upon the fires in the Amazon rainforest and across South America in mid-2019.

The dry season burning that clears space for cropland is an annual reoccurrence, but this season’s fires stand out. An uptick in large area fires in the Amazon has been documented by the Moderate Resolution Imaging Spectroradiometer (MODIS) sensor onboard NASA’s Terra and Aqua satellites, which collect coarse resolution imagery of the entire planet each day. MODIS has captured more active fires in 2019 than any year since 2010. The fires are not contained to the Amazon, however: large fires are raging across the continent.

Landsat imagery doesn’t offer daily images of fire conditions, but it does offer a closer view. 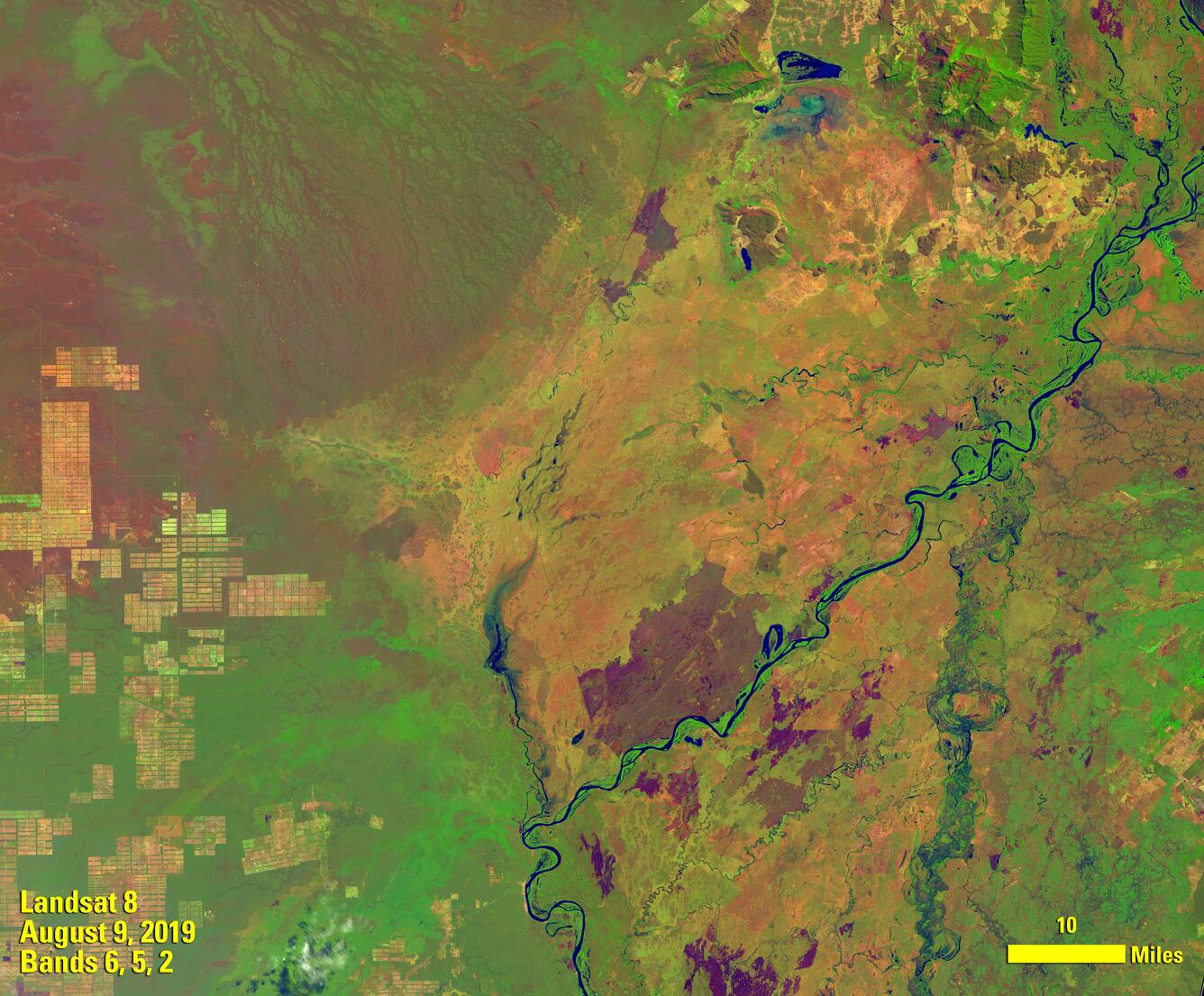 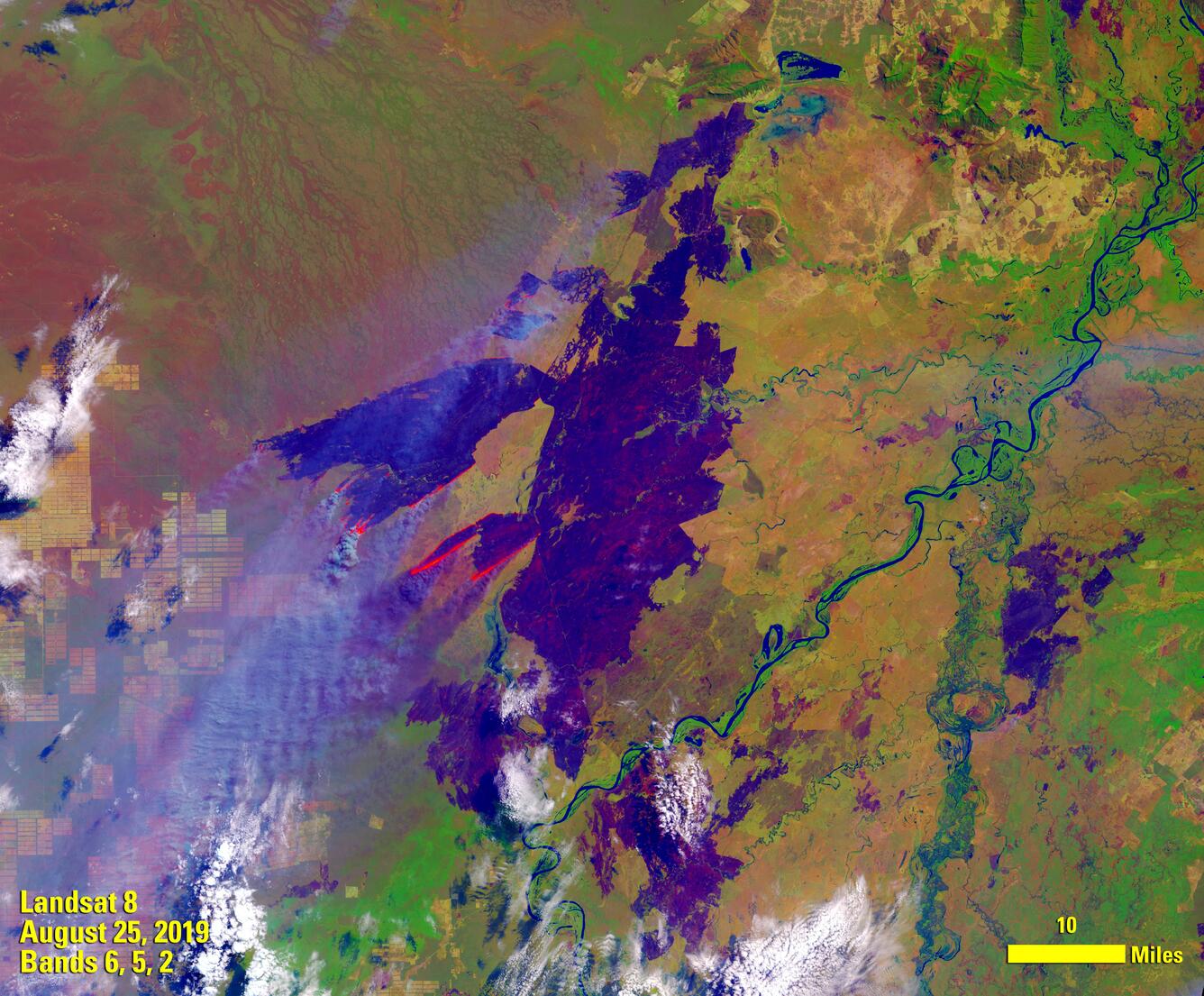 One of the largest current fires is located south of the Amazon rainforest, at the tri-border area connecting Brazil, Bolivia and Paraguay. These images, captured 16 days apart by Landsat 8, show its dramatic growth. The false color composites highlight fires and fire scars by combining the satellite’s shortwave infrared, near infrared, and blue bands (6,5,2). The resulting images render burned areas in dark shades of purple and active fires in bright red-orange. 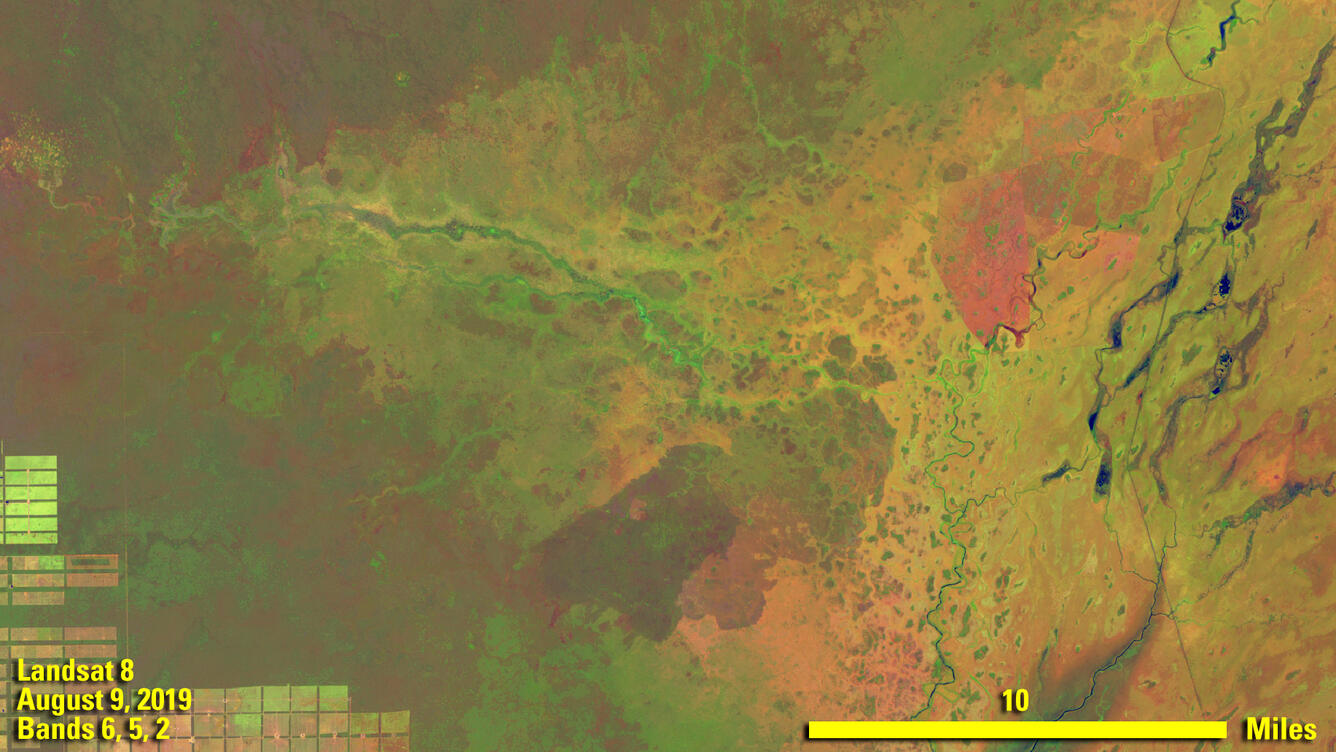 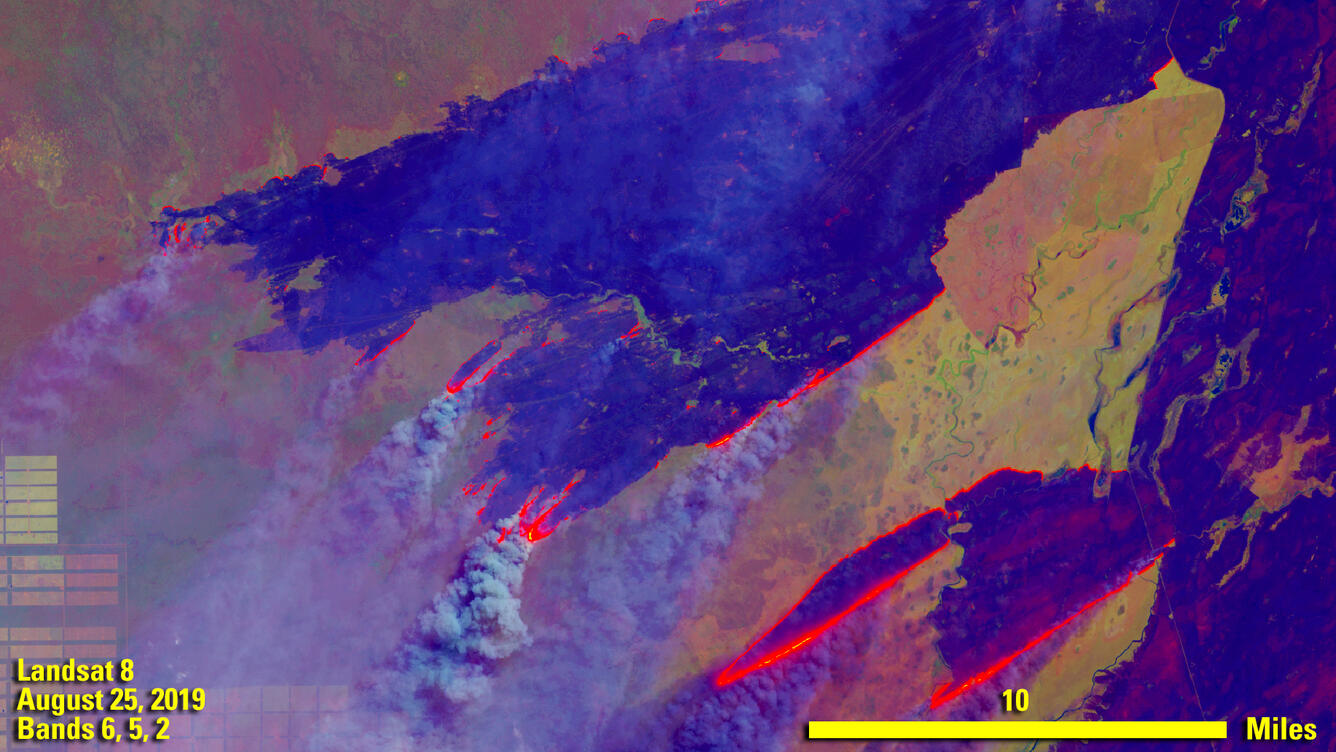 In the August 25th image, the largest contiguous portion of the active fire’s burn scar ran nearly 60 miles north to south. A closer view of the same image gives an even better sense of scale, the bright lines of current blazes run 9 to 10 miles at their longest.

Brazil has been the focus of much international attention, but Bolivia has also experienced its share of fire troubles this season.

The International Charter Space and Natural Disasters was activated in late August of 2019 to facilitate the collection of both government and commercial satellite data over Bolivia, a nation smaller than Brazil with fewer remote sensing resources. 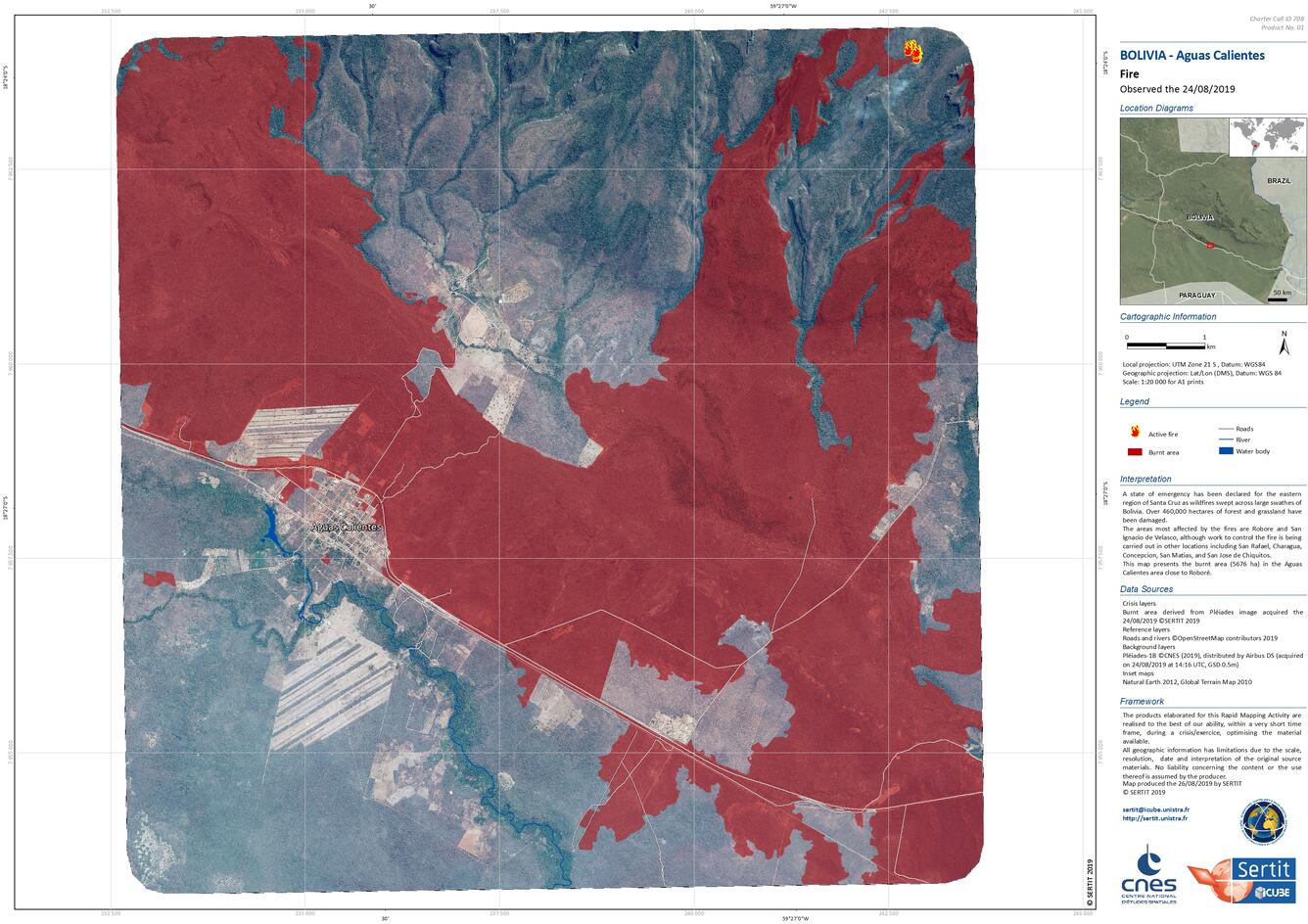 Burned area in the region of Santa Cruz has surpassed 1.14 million acres. The map above was produced by a French rapid mapping team using data from the Pleiades-1B satellite, which is provided to the Charter by the Centre National d'Études Spatiales (CNES). It represents 14,026 acres of burned land in the Aguas Calientes area, close to the Roboré -  a city west of the large tri-border fire.

The USGS Earth Resources Observation and Science (EROS) Center is a member of the International Charter that helps facilitate the collection and distribution of satellite data during natural and man-made disasters. 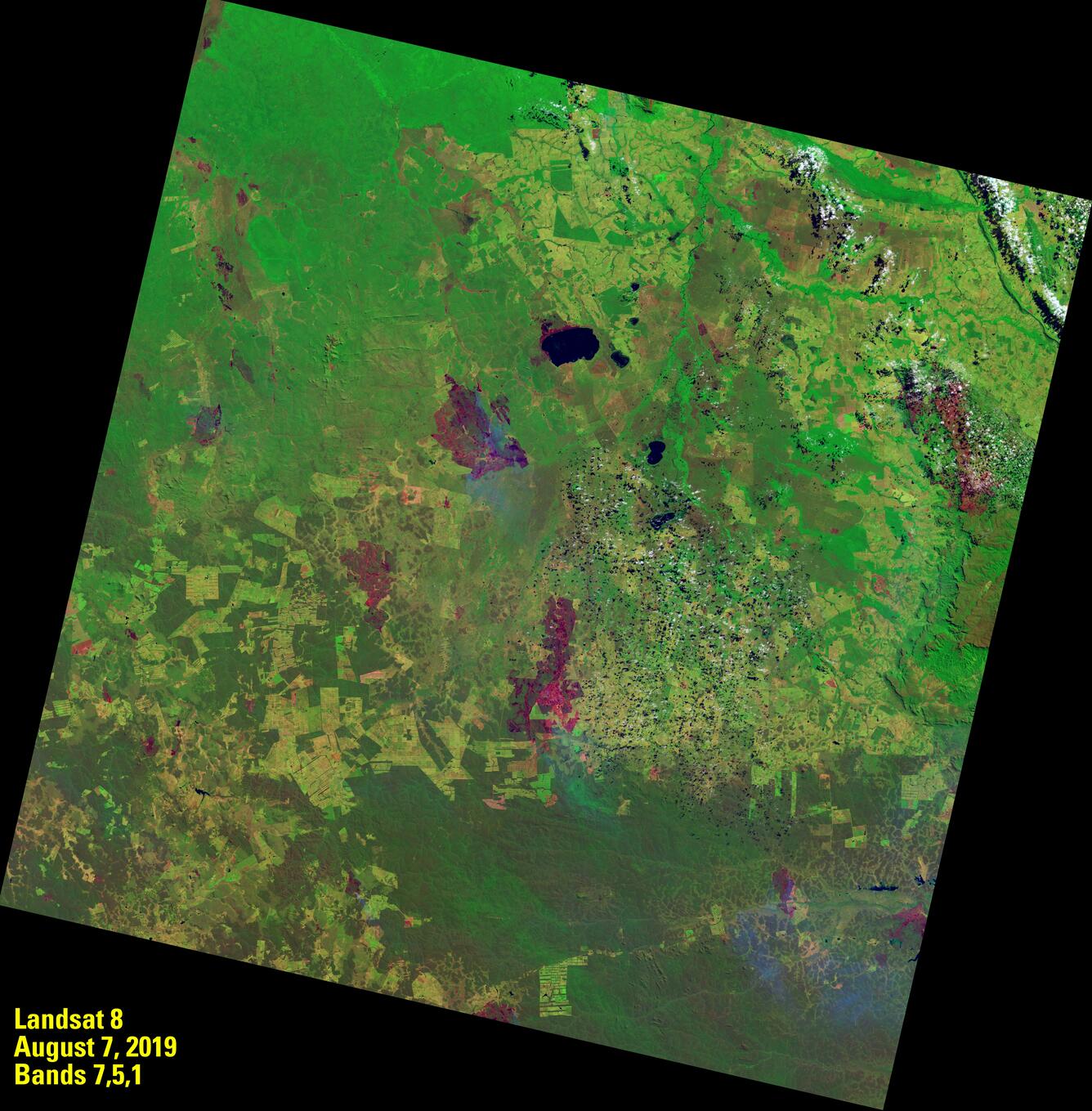 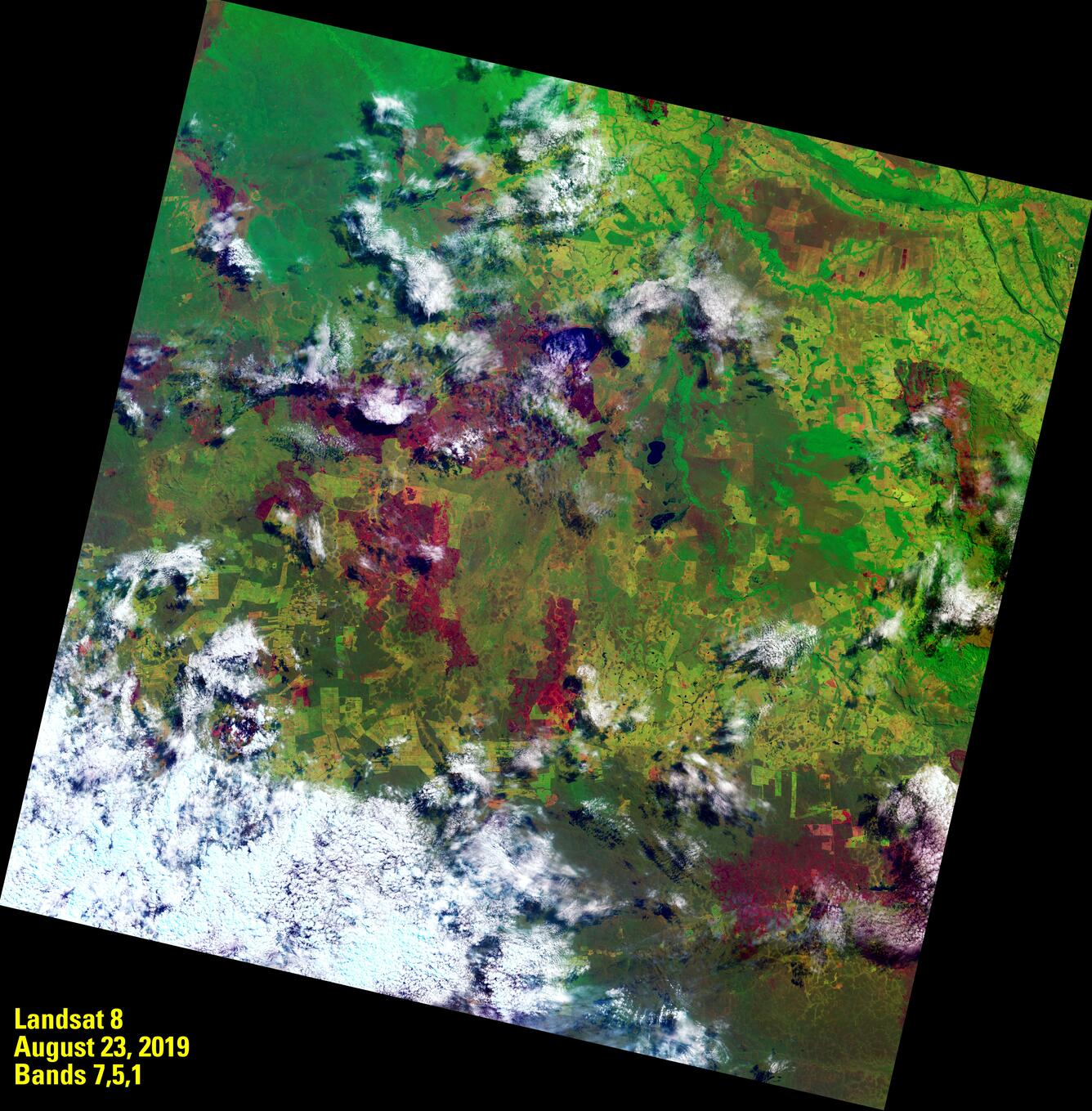 The August 23 Landsat 8 image shown above was ingested into the Hazards Data Distribution System (HDDS) Explorer and disseminated to emergency responders along with other satellite images collected over the area. The wide area shot shows the rapid expansion of the fires between August 7 and August 23 through a false color composite of the satellite’s shortwave infrared, near infrared and coastal aerosol bands (7,5,1). Band 1 offers better penetration of clouds, which are prevalent in the August 23 image. 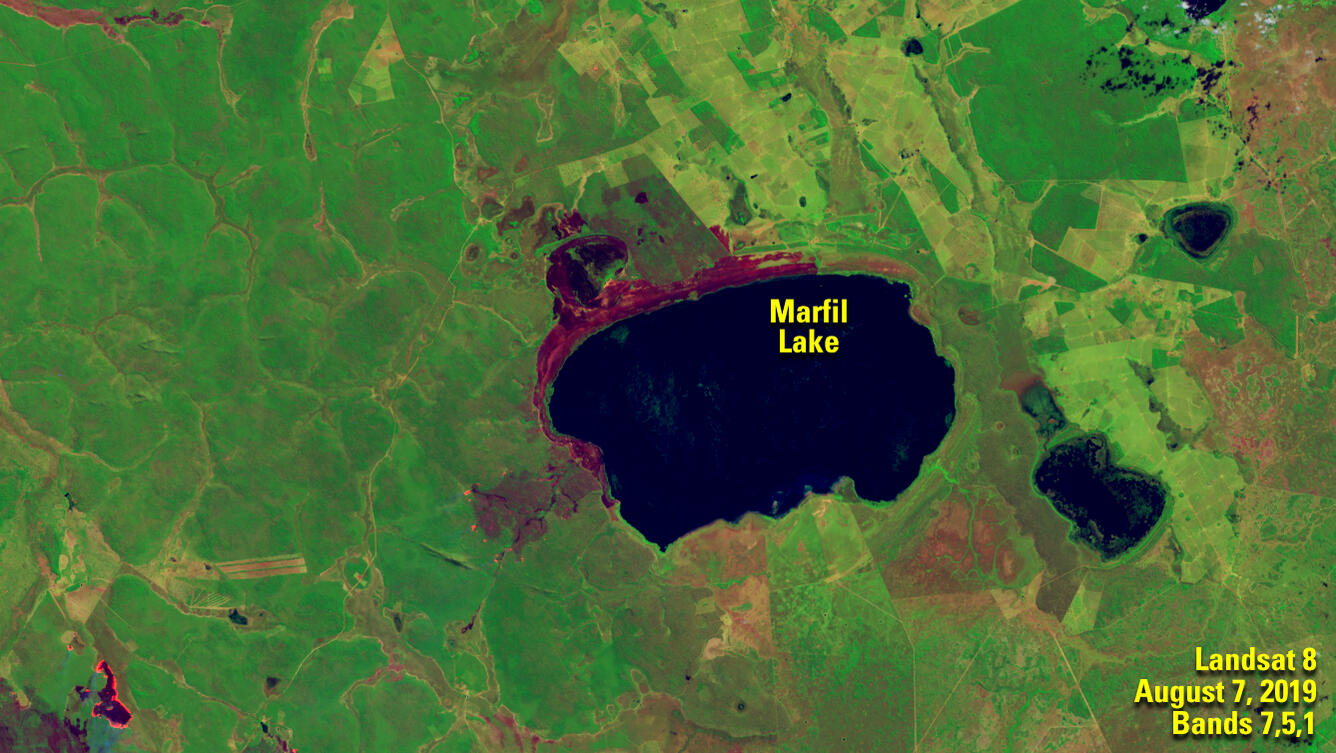 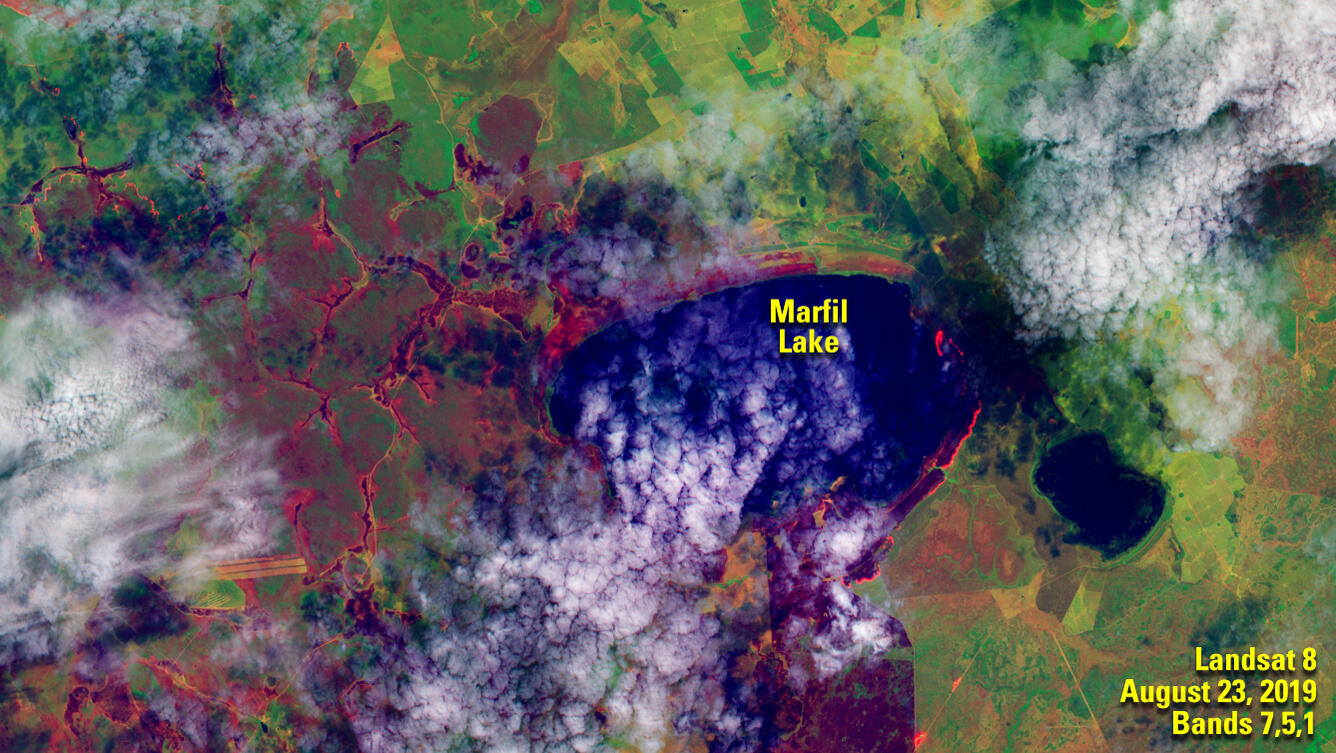 A closer look at the scene shows the active burning that encircles Marfil Lake, a 5-mile wide body of freshwater about 200 miles north of Roboré on the Bolivia/Brazil border. The latter image shows the impact of the fire all around the lake, extending west across the landscape.

Imagery from Landsat, as well as other data sources, will continue to help researchers, emergency responders and the public to understand the scale and scope of wildfires the world over.

For more information on Landsat, visit the USGS Landsat page.