The USGS Northeast Region has been an active and competent force in flood-science through (1) maintenance of our streamgaging network to provide timely and accurate data to the National Weather Service, other federal (USACE and FEMA) and state agencies (Emergency Management Agencies), and the public in times of flood emergencies; (2) documentation of major floods; (3) involvement in the USGS Flood Inundation Mapping (FIM) program; (4) research on stream and river flood hydrology and modeling; and (5) development of statistical hydrologic documentation tools. The Northeast Region Flood Science Capability Team will play a leadership role in flood sciences by coordinating, enhancing, and promoting flood-science programs, both riverine and coastal, within the Northeast Region, and working with others from other regions and from other agencies or universities to enhance and develop flood science programs and capabilities in support of USGS national and regional goals. 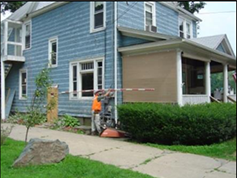 Major objectives for the Northeast Region Flood Science Capability Team will include: 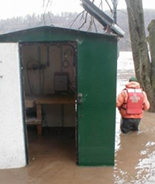 The USGS Flood Event Viewer (FEV) is the public data discovery component of the Short-Term Network (STN) database. Data viewable and downloadable from this page are from the STN database. This application integrates with the USGS National Water Information System (NWIS) database  for display of time-series water data.

Maps of flood and high flow conditions within the U.S.

Investigations of coastal change at Fire Island, New York (N.Y.), sought to characterize sediment budgets and determine geologic framework controls on coastal processes. Nearshore sediment thickness is critical for assessing coastal system sediment availability, but it is largely unquantified due to the difficulty of conducting geological or geophysical surveys across the nearshore. This study use
By
Coastal and Marine Hazards and Resources Program, St. Petersburg Coastal and Marine Science Center
April 1, 2017

Hurricane Sandy was one of the most destructive hurricanes in US history, making landfall on the New Jersey coast on Oct 30, 2012. Storm impacts included several barrier island breaches, massive coastal erosion, and flooding. While changes to the subaerial landscape are relatively easily observed, storm-induced changes to the adjacent shoreface and inner continental shelf are more difficult to eva
By
Natural Hazards, Coastal and Marine Hazards and Resources Program, Woods Hole Coastal and Marine Science Center, Advanced Research Computing (ARC)
March 29, 2017

The salt marshes of Jamaica Bay, managed by the New York City Department of Parks & Recreation and the Gateway National Recreation Area of the National Park Service, serve as a recreational outlet for New York City residents, mitigate flooding, and provide habitat for critical wildlife species. Hurricanes and extra-tropical storms have been recognized as one of the critical drivers of coastal wetl
By
Ecosystems, Wetland and Aquatic Research Center
March 24, 2017

Digital flood-inundation maps for an approximately100-mile length of Lake Champlain in Addison, Chittenden, Franklin, and Grand Isle Counties in Vermont and northern Clinton County in New York were created by the U.S. Geological Survey (USGS) in cooperation with the International Joint Commission (IJC). The flood-inundationmaps, which can be accessed through the International Joint Commission (IJC
By
Water Resources, New England Water Science Center
March 8, 2016

Historically high flood levels were observed during flooding in Lake Champlain and the Richelieu River from late April through May 2011. Flooding was caused by record spring precipitation and snowmelt from the third highest cumulative snowfall year on record, which included a warm, saturated late spring snowpack. Flood stage was exceeded for a total of 67 days from April 13 to June 19, 2011. Durin
By
Water Resources, New England Water Science Center
October 28, 2011

Development of flood-inundation maps for the West Branch Susquehanna River near the Borough of Jersey Shore, Lycoming County, Pennsylvania

Streamflow data, water-surface-elevation profiles derived from a Hydrologic Engineering Center River Analysis System hydraulic model, and geographical information system digital elevation models were used to develop a set of 18 flood-inundation maps for an approximately 5-mile reach of the West Branch Susquehanna River near the Borough of Jersey Shore, Pa. The inundation maps were created by the U
By
Water Resources, Pennsylvania Water Science Center

USGS EarthWord of the Week

The unsaturated zone is the area below the surface of the ground but above the groundwater table. In other words, it’s the area that is comparatively...