Bathymetry of a dynamic tidal estuary, such as San Francisco Bay, provides the observable linkage between anthropogenic modifications of the landscape—such as evolving land use practices, flood control, and water diversions—and natural forces of climate-driven river flow, sea level change, tides, and wind. By examining our record of hydrographic surveys, spanning over 150 years, we can gain insights into the probable effect of future modification including efforts toward restoration.

In addition to historical change analysis, current bathymetry is critical for the calibration and interpretation of hydrodynamic and ecological models. Mass balance and sheer stress are driven by bathymetry—even ecological niches are influenced by bathymetry (depth, turbidity, particle size, light, turbulence, etc.).

Here, we provide information about the bathymetric data available for San Francisco Bay. 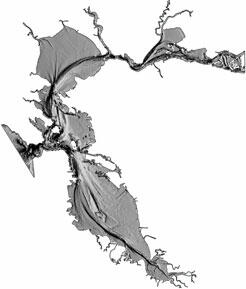 In the example sequence shown below, the first step in the preparation of regular grids displayed on this web site begins with irregular hydrographic survey data (soundings) that have been corrected to a common datum (1).

The National Oceanic and Atmospheric Administration (NOAA) is the primary resource for obtaining these original soundings. Other agencies, including the US Army Corps of Engineers, California Department of Water Resources, US Bureau of Reclamation, and the USGS, have contributed local studies. Once the soundings are in hand they are contoured, and shoreline and marsh perimeters are added and combined into a geographic information system (GIS) (2).

All data layers must be adjusted to a common horizontal and vertical datum and all depths must have the same orientation and units. At this point a grid can be generated.

Quality control is an iterative process, performed on the resulting grid by comparing it with the original soundings (3, 4).

Errors are computed, plotted and repaired when appropriate. Errors are usually a result of incorrect unit tags on the source data or digitizing mistakes, but some are due to gradients in bathymetry that cannot be resolved by a single grid cell.

The final grid (5) can be adjusted to a different tidal datum using an adjustment grid.

This grid is produced by assigning tide levels observed at shore stations to co-tidal lines from the TRIM-2D model (6, 7).

Using this 100m grid cell representation of the Bay we can compute some primary geomorphic features of the basin--such as surface area and volume--for a given tidal datum, and compare these and other statistical properties in the sub-basins of San Francisco Bay. 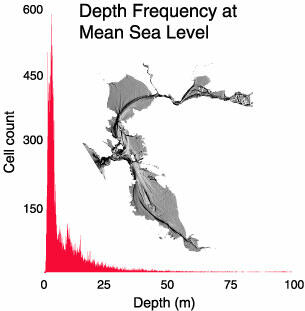 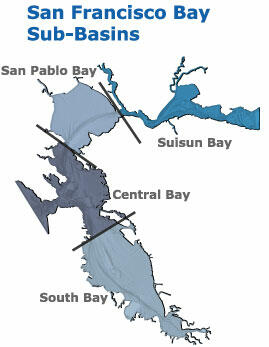 Properties based on the Mean Sea Level grid

As described in our METHODS section, a continuous surface representation of each bathymetric survey was created using Topogrid, an Arc/Info module that utilizes sounding and contour information to create a hydrodynamically correct surface. Input data was a combination of point soundings and hand-drawn depth contours (see table below). Once a bathymetric surface has been created for each hydrographic survey, the surfaces are adjusted to a common datum and we compute change or difference grids. These new ‘change’ surfaces identify areas of erosion and deposition.

Here is an example difference map of San Pablo Bay (1856-1887). During this period there was massive sediment accumulation related to hydraulic gold mining.

The data supporting historical change analysis is quite extensive. The following tables summarize the survey dates, digitized soundings, and contours used to produce the bathymetric surfaces and difference maps for San Francisco Bay.

Animations of change for North Bay

By linear interpolation, we can compute sedimentation maps for years between surveys and combine the maps to produce an animation of sedimentation for the North Bay. This animation gives an overall view of the system in time and space. We can see that, in the more active channels of Suisun Bay, surface sediment is deposited and erodes quickly in response to changing flows (floods/drought) and modifications (such as dredging the southern channel or long term mooring of the mothball fleet).

Making these assumptions, we can predict the location and thickness of the original hydraulic mining debris. It is especially notable that the mercury employed in gold mining in the Sierra Nevada was refined liquid quicksilver or elemental mercury; this is a form of mercury much more likely to foster net methylation than is cinnabar, the form of mercury in most mercury mines. Approximately 10,000 tonnes of refined mercury were lost to the watershed during the Gold Rush mining era. Much of the mercury consumed by gold mining could have been incorporated into the 12 billion cubic meters of sediments extracted by the mining activities and released to the rivers of the Bay-Delta watershed. The mercury-laced hydraulic mining debris was ultimately transported to the bay-delta; it is known that large deposits of hydraulic mining debris remain in bay sediments. These wastes formed marshes, islands, or filled or diked marsh, or were deposited in shallow waters. Under the right circumstances this mercury contamination is transported through the food chain and concentrated in some commercial and sport fish. Human consumption of fish caught in the Bay is already restricted because of mercury contamination. Specifically, adults are advised to limit consumption of sport fish from the Bay to two times a month; pregnant or nursing women and children 6 or under should limit consumption to one time a month. Large shark and striped bass from the Bay should not be consumed at all. As we study the feasibility of restoration of marshes that were sinks for mining debris, the possibility of releasing mercury to the Bay must be considered.

Pesticide mixtures in the Sacramento–San Joaquin Delta, 2016–17: Results from year 2 of the Delta Regional Monitoring Program

The Delta Regional Monitoring Program was developed by the Central Valley Regional Water Quality Control Board in response to the decline of pelagic fish species in the Sacramento–San Joaquin Delta that was observed in the early 2000s. The U.S. Geological Survey, in cooperation with the Delta Regional Monitoring Program, has been responsible for collecting and analyzing surface-water samples for a
By
Water Resources, California Water Science Center
October 14, 2019

Morphodynamic resilience of intertidal mudflats on a seasonal time scale

Intertidal mudflats are morphodynamic features present in many estuaries worldwide. Often located between vegetated shores and deep channels they comprise valuable ecosystems and serve to protect the hinterland by attenuating waves. Although mudflats are persistently present on yearly to decadal time scales, little is known on their morphodynamic adaptation to short‐term variations in forcing such

A digital elevation model (DEM) is an essential component of any hydrodynamic model. The Delta Modeling Section (Section) has maintained a database of bathymetry soundings and levee surveys for decades and published a 10-meter (10m) DEM for the San Francisco Bay and Sacramento-San Joaquin Delta (Delta) (California Department of Water Resources 2012). In collaboration with the U.S. Geological Surve
By
Natural Hazards, Coastal and Marine Hazards and Resources Program, Pacific Coastal and Marine Science Center
February 21, 2019

Coastal wetlands have a long history of degradation and destruction due to human development. Now recognized as one of the most productive ecosystems in the world, substantial efforts are being made to restore this critical habitat. While wetland restoration efforts are generally viewed as beneficial in terms of providing wildlife habitat and flood control, they are often accompanied by dramatic p
By
Natural Hazards, Coastal and Marine Hazards and Resources Program, Toxic Substances Hydrology, Pacific Coastal and Marine Science Center
December 22, 2018

A time series of three closely-spaced data sets are used to track the early expansion of the invasive Japanese benthic foraminifera Trochammina hadai in the southern portion of San Francisco Bay known as South Bay. The species initially appeared in 1983, comprising only 1.5% of the assemblage in one of four samples that were dominated by the native species Ammonia tepida and Cribroelphidium excava

Alviso Slough area, South San Francisco Bay, California, is the site of an ongoing effort to restore former salt production ponds to intertidal habitat. As restoration proceeds and the levees surrounding the former salt production ponds are breached, the increase in tidal prism and associated sediment scour in the sloughs will remobilize legacy mercury deposits. A numerical model that is able to a
By
Natural Hazards, Coastal and Marine Hazards and Resources Program, Pacific Coastal and Marine Science Center
July 11, 2018

Emergent hypotheses about causes of the pelagic organism decline in the Sacramento–San Joaquin Delta (Delta) indicate that a more complete understanding of the quality of water entering the Delta is needed. Less than half of all pesticides used in the Delta watershed are measured in samples collected for routine monitoring, and with new pesticides continually being registered for use, the concentr
By
Water Resources, California Water Science Center
June 30, 2017

Suspended sediment concentration is an important estuarine health indicator. Estuarine ecosystems rely on the maintenance of habitat conditions, which are changing due to direct human impact and climate change. This study aims to evaluate the impact of climate change relative to engineering measures on estuarine fine sediment dynamics and sediment budgets. We use the highly engineered San Francisc
By
Pacific Coastal and Marine Science Center
June 27, 2017

Climate change, sea-level rise, and human development have contributed to the changing geomorphology of the San Francisco Bay - Delta (Bay-Delta) Estuary system. The need to predict scenarios of change led to the development of a new seamless, high-resolution digital elevation model (DEM) of the Bay – Delta that can be used by modelers attempting to understand potential future changes to the estua
By
Pacific Coastal and Marine Science Center
June 5, 2017

A linked modeling approach has been undertaken to understand the impacts of climate and infrastructure on aquatic ecology and water quality in the San Francisco Bay-Delta region. The Delft3D Flexible Mesh modeling suite is used in this effort for its 3D hydrodynamics, salinity, temperature and sediment dynamics, phytoplankton and water-quality coupling infrastructure, and linkage to a habitat suit
By
Water Resources