The DUring Nearshore Event eXperiment (DUNEX) is an aggregation of multiple scientific organizations collaborating to increase understanding of nearshore processes.  The U.S. Geological Survey (USGS) has chosen Pea Island National Wildlife Refuge as a study location to investigate and characterize the magnitude and timing of changes to coastal morphology (i.e., dunes, shorelines), bathymetry, and landcover after a storm on a natural, or low human impacted coastline.  This contrasts with the site chosen at the Field Research Facility in Duck which represents a developed shoreline target area. Measurements will include times series photography capturing sediment movement, offshore acoustic instrumentation measuring waves and currents, and topographic and bathymetric surveys of the beach and intertidal zone.  The data acquired will contribute to creating models to predict future impacts from coastal storms. 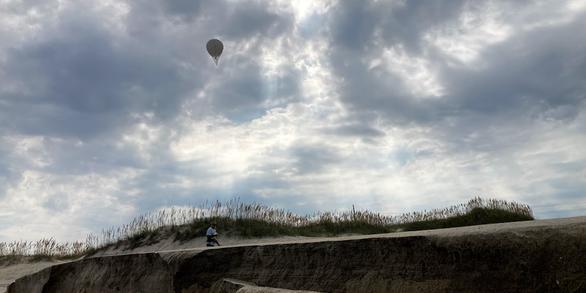 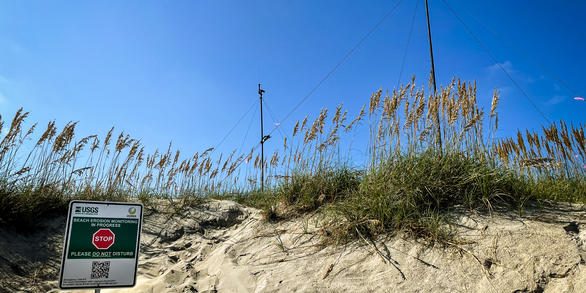 Two video cameras are temporarily mounted on a dune at Pea Island National Wildlife Refuge on the Outer Banks of North Carolina.

Pea Island National Wildlife Refuge is on the north end of Hatteras Island and spans about 13 miles from Oregon Inlet to the island’s northernmost village of Rodanthe. The refuge is a stopover area for many migratory birds and provides nesting habitat for sea turtles, colonial waterbirds, and shorebirds. It also provides public use opportunities both on the beach and along trails surrounding the northernmost refuge impoundment, North Pond. The primary infrastructure consists of NC Highway 12 and the refuge Visitor Center. The island has severable vulnerable sections to breaches from storms, which include the vicinity of the New (Pea Island) Inlet, which formed after Hurricane Irene in 2011, the southern extent at the “S-curves” near Rodanthe, and the northern extent near the Marc Basnight Bridge over Oregon Inlet. These locations share a common trait of being the narrowest parts of the Island and have relatively low-lying dunes susceptible to overwash and inundation.

Coastal morphology will be mapped using a combination of Structure from Motion (SfM) and GPS survey transects. Aerial imagery will be obtained by attaching a camera to a helium filled balloon-kite that is walked in a grid pattern along the beach. SfM techniques can then be used to create high resolution (5-10 cm) digital elevation models (DEMs) that represent the surface of the barrier island and 3-band RGB orthomosaics. The DEMs will be orthorectified using Real-Time-Kinematic (RTK) equipment and ground control points. Elevational profiles, shorelines, and volumetric data can be derived from these data products to validate and populate numerical models and quantify change over multiple surveys. Surveys can be expected to occur on a bi-weekly basis and in response to a storm event (before and after). Data can be fully processed and disseminated within hours of collection. Maps from this part of the experiment can be used to identify regions with high levels of erosion and highlight changes in land cover that may affect wildlife.

Oceanographic forcing and processes (e.g., waves, currents, sediment transport, run-up) during storm events will be measured using: an offshore waverider buoy measuring wave height, bottom platform (Nanopod) measuring currents and waves outside of the surfzone, an array of current and wave sensors across the surf zone, and pressure sensors in a cross-shore array on the beach. These oceanographic processes are the driving forces contributing to coastal stress and are important to assess when determining what areas of the coast are more or less vulnerable to storms.

A novel CoastCam set-up will also be deployed on the beach to measure water levels and topographic profiles during storms and quiescent periods by deploying a stereo-camera coastal monitoring station consisting of (at least) 3 time-synchronized digital cameras deployed in a stereo configuration with overlapping views of the nearshore waves, shoreline and the beach/dune face. This setup will allow for traditional image processing and coastal feature extraction (e.g., wave runup, shorelines, bathymetry) from the individual cameras while also providing stereo image sets for reconstructing beach/dune topographic profiles and the nearshore wave field using SfM techniques. The data collected from these CoastCams have a high temporal resolution potential and can collect on an hourly to daily basis.   Related CoastCam set-ups can be viewed at a variety of locations on the east and west coasts.

Below are other science projects associated with the DUNEX Pea Island Project. 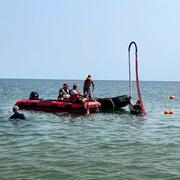 DUring Nearshore Event eXperiment (DUNEX) is a multi-agency, academic, and non-governmental organization (NGO) collaborative community experiment designed to study nearshore coastal processes during storm events. The experiment began in 2019 and is scheduled for completion in the fall of 2021. USGS participation in DUNEX will contribute new measurements and models that will increase our...
Learn More
link 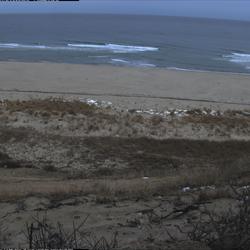 Using Video Imagery to Study Head of the Meadow Beach

Two video cameras are mounted on a bluff near Head of the Meadow Beach, Cape Cod National Seashore, North Truro, MA. One camera looks alongshore toward the north-northeast, and the second looks directly offshore (northeast). The cameras are part of a U.S. Geological Survey research project to study the beach and nearshore environment shared by beachgoers, shorebirds, seals, and sharks. The work is...
By
Natural Hazards, Coastal and Marine Hazards and Resources Program, Woods Hole Coastal and Marine Science Center
link
September 16, 2021

Using Video Imagery to Study Head of the Meadow Beach

Two video cameras are mounted on a bluff near Head of the Meadow Beach, Cape Cod National Seashore, North Truro, MA. One camera looks alongshore toward the north-northeast, and the second looks directly offshore (northeast). The cameras are part of a U.S. Geological Survey research project to study the beach and nearshore environment shared by beachgoers, shorebirds, seals, and sharks. The work is...
Learn More
link 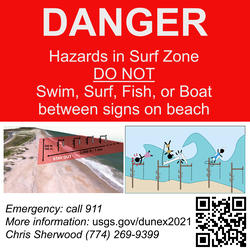 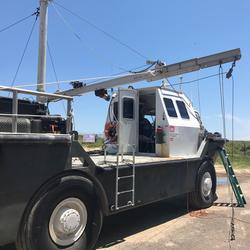 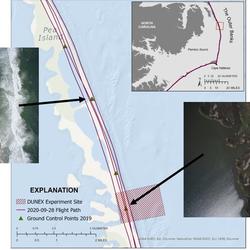 The During Nearshore Event Experiment (DUNEX) project is a large collaborative scientific study focusing on understanding the consequences of coastal storms on the morphology of coastal ecosystems. By flying large sections of the coast and collecting still images using structure from motion (SfM) techniques, we hope to contribute high resolution (20cm) elevation maps for time series comparisons...
Learn More
link 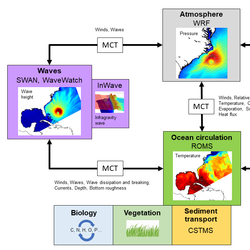 Large, collaborative field experiments such as DUNEX leverage observations of the coastal ocean made by multiple academic, agency, and NGO teams, providing the opportunity to grasp a broader picture of the forces responsible for coastal change. Despite deployment of many instruments, it’s impossible to measure everything, everywhere, at all times. Numerical models that represent the physical...
Learn More