What is Gas Hydrate?

Gas hydrate is an ice-like crystalline form of water and low molecular weight gas (e.g., methane, ethane, carbon dioxide). On Earth, gas hydrates occur naturally in some marine sediments and within and beneath permafrost. Gas hydrates have also been inferred on other planets or their moons. 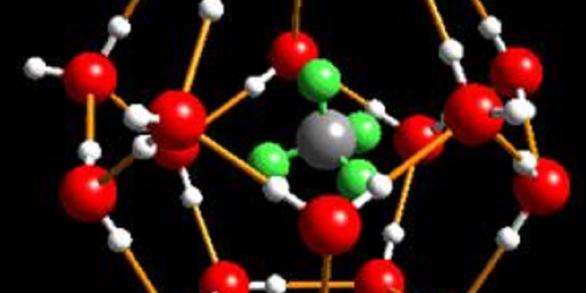 The USGS Gas Hydrates Project focuses on the study of natural gas hydrates in deepwater marine systems and permafrost areas.

At the molecular level, gas hydrate consists of gas molecules surrounded by cages of water molecules. Each water cage encloses a space of a particular size, and only a gas molecule small enough to fit within this site can be hosted in that specific hydrate structure. Structure I gas hydrate has 46 water molecules that enclose 8 sites where gas molecules may be hosted. Six larger gas sites are enclosed by water cages with 12 pentagonal and 2 hexagonal faces, while two smaller gas sites occur within pentagonal dodecahedral cavities. Some researchers have likened the water cage structures to buckyballs.

Methane molecules can fit within both the small and large sites in the Structure I lattice, and Structure I methane hydrate is indeed the most common type found in nature. Thus, “gas hydrate” and “methane hydrate” are often used interchangeably by researchers.

Visit to find out more about Gas Hydrates in Nature.

Where Does Methane Hydrate Occur?

Except on upper continental slopes (300-700 m water depth), the seafloor of most of the world’s oceans lies within the hydrate stability zone. Apart from a few locations, though, persistent seafloor gas hydrate mounds are relatively rare and not volumetrically important compared to the size of the global reservoir. Gas hydrate is in theory also stable in the lower part of the ocean water column, and gas bubbles rising from the seafloor sometimes form a shell of gas hydrate that usually does not survive very long.

How Does Gas Hydrate Form?

Gas hydrate forms when methane and water combine at pressure and temperature conditions that are common in the marine sediments of Earth’s continental margins and below about 200 m depth in permafrost areas. Globally, gas hydrate has been recovered or inferred in many continental margin settings and in onshore permafrost or offshore relict permafrost that was flooded by sea level rise over the past ~15,000 years. Gas hydrate has also been recovered from sediments beneath Lake Baikal, Earth’s largest freshwater lake.

The theoretical gas hydrate stability curve is calculated for a particular gas mixture and pore water salinity. Methane hydrate can form where local thermal conditions (geotherms) are colder than (to the left of) the gas hydrate stability curve (phase boundary; in red below) at any given depth (pressure). In the diagrams above, the ocean water temperature is cold enough to permit hydrate to be stable at a water depths greater than ~575 m, and gas hydrate is stable in the underlying sediments to a depth of about 225 m below the seafloor. For the permafrost example on the right (above), gas hydrate is stable from about 200 to 600 m within the permafrost and from 600 m to ~1100 m beneath the permafrost.

The spatial association of gas hydrates with continental margins is related to the availability of ample organic carbon that is being shed from the continents in these settings. Microbes use this carbon to generate methane. Such microbial methane is the most widespread source for methane in most natural gas hydrates, an interpretation that may be biased by the relatively shallow subseafloor depths from which most of gas hydrate samples have been recovered. In some locations and in sediment layers deep beneath the seafloor in petroleum basins, gas hydrates form instead from thermogenic gas that is generated through the deep-seated processes that are similar to those responsible for the formation of oil.

How Much Gas Hydrate Exists?

Prior to 1995, there had been no dedicated drilling of gas hydrate-bearing deposits, and estimates of the amount of methane sequestered globally in gas hydrate deposits ranged over several orders of magnitude. Gas volumes are often cited in units of trillion (10^12) cubic feet (TCF), and there are approximately 35.3 cubic feet in a cubic meter. The most careful pre-1990s estimates varied between 10^5 and 10^8 TCF of methane in gas hydrate globally, and numerous researchers devised global estimates between these endmembers as late as the mid-1990s. Since the start of dedicated drilling in 1995, researchers have learned that the saturation of gas hydrates in marine sediments is often far lower than the theoretical amount of gas hydrate that could be hosted in all available pore space. This has led to downward revisions of global and regional estimates. Most studies published in the past 15 years have concluded that between 10^5 and 5x10^6 TCF of methane is trapped in global gas hydrate deposits. While the minimum estimate is more than 4000 times the amount of natural gas consumed in the USA in 2010, only a fraction of the methane sequestered in global gas hydrate deposits is likely to be concentrated enough and accessible enough to ever be considered a potential target for energy resource studies. Also, until recently, there had never been any published estimate for gas sequestered in methane hydrates beneath the ice sheets of the Antarctic continent. This fact highlights the need for further updates to global gas-in-place estimates as new studies emerge.

How to Find Gas Hydrate

Researchers lack a fully reliable method for locating gas hydrate in marine sediments or the sediments of permafrost regions. Ideally, the existence and saturation of gas hydrate can be inferred without direct sampling (drilling). In marine settings, seismic reflection techniques have long been used to determine the minimum areal extent of gas hydrates. A bottom simulating reflector (BSR) is a negative polarity (seismically-faster material like hydrate-charged sediments over seismically-slower material like gas-charged sediments) “interface” found in some marine sedimentary sections. The BSR is widely interpreted as the base of the gas hydrate stability zone and derives its name from the fact that it often mimics the gross morphology of the seafloor. Because of BSRs represent a phase transition, they often cross-cut the layering of sediments. The existence of a BSR means that gas hydrate almost assuredly occurs in the overlying sedimentary section. However, gas hydrate has been sampled at many locations lacking a BSR. Thus, BSR distribution provides only a minimum estimate of the area in which gas hydrate might occur. To date, BSRs have not been found in areas with permafrost-associated gas hydrates.

A disadvantage of seismic methods for locating gas hydrate is that the saturation of methane hydrate in pore space must generally exceed about 40% for the most common measure of seismic velocity to be significantly altered. This means that some seismic techniques may miss a significant amount of methane hydrate in areas where the saturation is less than ~40%. Laboratory studies show that electrical methods are more sensitive to lower saturations of gas hydrate. This has fueled interest in the application of electromagnetic (EM) methods for regional characterization of gas hydrate deposits or the joint application of EM and seismic techniques. The sensitivity of electrical properties to a wide range of hydrate saturations is also manifest by the widespread reliance of borehole resistivity logging to identify hydrate-bearing sediments in both marine and permafrost-associated settings.

Below are publications associated with the Gas Hydrates Project.

Gas hydrate is a naturally occurring, ice-like substance that forms when water and gas combine under high pressure and at moderate temperatures. Methane is the most common gas present in gas hydrate, although other gases may also be included in hydrate structures, particularly in areas close to conventional oil and gas reservoirs. Gas hydrate is widespread in ocean-bottom sediments at water depths
By
Woods Hole Coastal and Marine Science Center
January 1, 2007

Methane hydrate is an icelike form of concentrated methane and water found in the sediments of permafrost regions and marine continental margins at depths far shallower than conventional oil and gas. Despite their relative accessibility and widespread occurrence, methane hydrates have never been tapped to meet increasing global energy demands. With rising natural gas prices, production from these
By
Natural Hazards, Coastal and Marine Hazards and Resources Program, Woods Hole Coastal and Marine Science Center
November 30, 2012

Methane hydrates and the future of natural gas

For decades, gas hydrates have been discussed as a potential resource, particularly for countries with limited access to conventional hydrocarbons or a strategic interest in establishing alternative, unconventional gas reserves. Methane has never been produced from gas hydrates at a commercial scale and, barring major changes in the economics of natural gas supply and demand, commercial producti
By
Woods Hole Coastal and Marine Science Center
July 15, 2021

CO2 and CH4 clathrate hydrates are of keen interest for energy and carbon cycle considerations. While both typically form on Earth as cubic structure I (sI), we find that pure CO2 hydrate exhibits over an order of magnitude higher electrical conductivity (σ) than pure CH4 hydrate at geologically relevant temperatures. The conductivity was obtained from frequency-dependent impedance (Z) measurement
By
Natural Hazards, Earthquake Hazards, Earthquake Science Center
June 4, 2020

Timescales and processes of methane hydrate formation and breakdown, with application to geologic systems

Gas hydrate is an ice-like form of water and low molecular weight gas stable at temperatures of roughly -10ºC to 25ºC and pressures of ~3 to 30 MPa in geologic systems. Natural gas hydrates sequester an estimated one-sixth of Earth’s methane and are found primarily in deepwater marine sediments on continental margins, but also in permafrost areas and under continental ice sheets. When gas hydrate
By
Woods Hole Coastal and Marine Science Center
June 22, 2020

Gas hydrates have received considerable attention due to their important role in flow assurance for the oil and gas industry, their extensive natural occurrence on Earth and extraterrestrial planets, and their significant applications in sustainable technologies including but not limited to gas and energy storage, gas separation, and water desalination. Given not only their inherent structural fle
By
Natural Hazards, Coastal and Marine Hazards and Resources Program, Woods Hole Coastal and Marine Science Center
July 29, 2019

The proliferation of drilling expeditions focused on characterizing natural gas hydrate as a potential energy resource has spawned widespread interest in gas hydrate reservoir properties and associated porous media phenomena. Between 2017 and 2019, a Special Section of this journal compiled contributed papers elucidating interactions between gas hydrate and sediment based on laboratory, numerical
By
Natural Hazards, Coastal and Marine Hazards and Resources Program, Woods Hole Coastal and Marine Science Center
May 6, 2019

Methane hydrate occurs naturally under pressure and temperature conditions that are not straightforward to replicate experimentally. Xenon has emerged as an attractive laboratory alternative to methane for studying hydrate formation and dissociation in multiphase systems, given that it forms hydrates under milder conditions. However, building reliable analogies between the two hydrates requires sy
By
Natural Hazards, Coastal and Marine Hazards and Resources Program, Woods Hole Coastal and Marine Science Center
December 30, 2010

Volume change associated with formation and dissociation of hydrate in sediment

Gas hydrate formation and dissociation in sediments are accompanied by changes in the bulk volume of the sediment and can lead to changes in sediment properties, loss of integrity for boreholes, and possibly regional subsidence of the ground surface over areas where methane might be produced from gas hydrate in the future. Experiments on sand, silts, and clay subject to different effective stress
By
Woods Hole Coastal and Marine Science Center
December 31, 2012

As a consequence of contemporary or longer term (since 15 ka) climate warming, gas hydrates in some settings may presently be dissociating and releasing methane and other gases to the ocean-atmosphere system. A key challenge in assessing the impact of dissociating gas hydrates on global atmospheric methane is the lack of a technique able to distinguish between methane recently released from gas hy
By
Geology, Minerals, Energy, and Geophysics Science Center, Geology, Geophysics, and Geochemistry Science Center 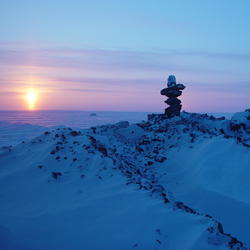 When can ice yield fire? That’s the burning question at the heart of one of USGS’s longest-running research programs to date: the exploration of gas hydrates.