All Landsat Level-1 data products are created using the best available processing level for each particular scene. The processing level used is determined by the existence of ground control points, elevation data provided by various digital elevation models, and/or payload correction data collected by the spacecraft and sensor.

Landsat satellite data are processed into Level-1 scenes using the Landsat Product Generation System (LPGS). Each Landsat scene is processing to one of the three following processing levels:

When scenes fail to process to L1TP, the loss of the ability to use GCPs affect data from each sensor differently. Details for each sensor are described below. The USGS Cal/Val team continually works to improve the quality of Landsat data. Data improvements will be implemented into future Landsat Collections. Users are encouraged to contact the USGS with scenes that are found to be problematic, as these will be used as testing data to prove data improvements. Every best effort is always made to improve data quality.

If a Landsat 8 scene fails to generate a L1TP product, the scene is processed to L1GT, without the use of GCPs. Since the pointing accuracy of Landsat 8 spacecraft is excellent (about 17-m, circular error (CE)-90, terrain correction helps to account for the higher order/relief induced distortions even when GCPs are not used. So, while Landsat 8 L1GT products may not be as accurate as L1TP products, they are typically better than 30-meters (m) (one pixel), even without the use of GCPs.

While the Landsat 7 spacecraft pointing-accuracy requirement is 250-m, in most cases, it is 10- m. Although Landsat 7 data are not as accurate as Landsat 8, the advantage of correcting the higher-order terrain-induced effects outweighs the inaccuracy introduced due to the small mis-registration error between the DEM and the scene due to its pointing errors. Therefore, Landsat 7 scenes that fail to generate L1TP products are corrected for terrain without the use of GCPs (L1GT).

It should be understood that In some rare cases, due to errors / inconsistencies in the spacecraft and instrument telemetry, scenes can exhibit errors that may introduce a simple shift (on the order of a few hundred meters) to higher order distortions that can affect the entire scene producing inconsistent internal geometry. In this case, the L1GT products could be geometrically inaccurate by several hundred meters. The EROS Cal/Val team is continuing to work in improving the geometric accuracies of these scenes.

There are no specific pointing accuracy requirements for Landsat 5 (or for Landsat 4). Based on EROS Cal/Val analysis, the pointing accuracy of a Landsat 5 scene can vary anywhere from 0 m to 10 kilometers (km), depending on the time-period within the life of the mission, telemetry-related issues, and the type of telemetry available to estimate the spacecraft position (no payload correction data (PCD) or use of two-line elements (TLE) than spacecraft position information. Most Landsat 5 TM scenes in the archive are expected to be within 1 km, but scenes with offsets between 1 and 3 km are not uncommon. LPGS can estimate the scene’s geometric offsets when their offsets are within 4 km, but scenes with offsets greater than 4 km cannot be registered with the GCPs. These scenes will be processed as L1GS without the use of GCPs or DEM.

Unlike Landsat 8 and Landsat 7, TM scenes are likely to have been acquired with large pointing error (> 500 m). Therefore, applying terrain correction without the use of GCPs will introduce large incorrect relief-adjustments to the scene. Therefore, all TM scenes are processed as L1GS products if GCPs are not used in data correction.

MSS geodetic accuracy is known to have a much greater offset than TM data.  The EROS Cal/Val Team is looking to address MSS geometric/geodetic data accuracy in the future.

Users need to be aware that since the accuracy of L1TP, L1GT, and L1GS products vary, stacking scenes with different corrections will introduce misalignment between the images. The magnitude of misalignment between the products is dependent on the sensor, product types, and can vary anywhere from less than one pixel to hundreds of pixels. All L1TP Tier-1 products are expected to be consistent to within 12-m. Although Tier-1 and Tier-2 products are expected to be aligned to within 1 pixel in general, it is not uncommon to observe misalignments more than 1 pixel between Tier-1 and Tier-2 products (for any sensor combinations) or between any Tier-2 products.

Unfortunately, since Landsat data are processed using automated approaches when attempting to produce a L1TP product, it is not possible to provide estimated offsets for L1GT and L1GS products. A designation of L1GT or L1GS for a given scene is due to the fact that an accurate geometric offset could not be estimated using the GCPs through these automated approaches. These product designations also indicate no information is available on the magnitude of the offsets between the imagery and ground control. This can also be an indication that any cloud-free (snow/ice free) scene that failed to generate a L1TP product is likely to have poor telemetry data. This is especially true for the data from earlier Landsat missions. Scenes with poor telemetry data are highly susceptible to higher-order distortions and cannot be corrected to match the requirements of an orthorectified product even when approximate offsets are known.

How Users can Best Utilize Scenes of Different Corrections

Geometric registration of the data with further processing is dependent on the whether the scene can be corrected using a simple set of biases as offsets. In some cases, as mentioned earlier, incorrect measurements / outliers in the instrument or spacecraft telemetry can potentially introduce higher-order distortions in the L1GS products that cannot be corrected by offsets or using a linear model. Secondly, terrain-induced effects cannot be corrected without the use of DEM.

The image to the right is an example of the higher-order distortion that can be observed in a L1TP product that was originally processed as a L1GS product. This is an example of a scene that has bad telemetry data, resulting in not only large geodetic offset, but also an inconsistency in the internal geometry of the scene that cannot be corrected using a simple polynomial or affine transformation.The L1GS product’s geometric offset was measured by comparing against a L1TP product. The measured offsets (>10 km), determined manually, were then used within the Image Assessment System (IAS) to produce a L1TP product. Several software packages and most GIS systems will allow a user to pick control manually and apply a given spatial transformation to an image file.

The color-coded graphics observed in the figure shows the higher order distortions present in the image even when it is corrected for the large geodetic offsets within the scene.

Systematic Correction provides systematic radiometric and geometric corrections, which are derived from data collected by the sensor and spacecraft.

The success rate for creating L1TP products varies by sensor, but also by cloud cover. The table below displays, for Landsat 8, each cloud-cover class and lists the proportion of images that process to an L1TP, those that fallback to an L1GT or L1GS after a failed attempt to produce an L1TP (clouds or poor ephemeris data), and the proportion that are planned to produce an L1GT (night, Antarctica or insufficient land features). These values were generated from the most recent Landsat Product Generation System (LPGS) software version.

Note: The information shown below are based on Landsat Collection 1; updated graphics are being created for Collection 2 and will be added to this page when they are complete.

The distribution of the RMSE for each sensor shows significant improvement as sensor and spacecraft technologies evolve, as of February 28, 2019. 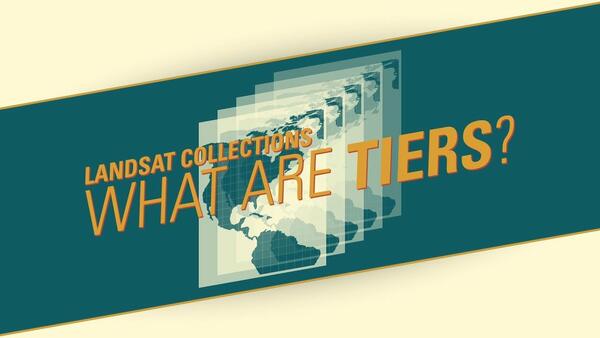 The U.S. Geological Survey (USGS) changed the management and delivery of Landsat products to the public in its archive through the implementation of Collections. The Collections process ensures consistent data quality through time and across all the Landsat sensors with a few modifications to the metadata. The consistent data products from Collections are more conducive for applications such as ti
By
National Land Imaging Program, Earth Resources Observation and Science Center, Earth Resources Observation and Science (EROS) Center , EROS CalVal Center of Excellence (ECCOE), Landsat Missions