Unvegetated to Vegetated Ratio (UVVR) of the U.S. coastal wetlands:

Salt marshes are among the most productive and valuable ecosystems in the world. The vegetation in these coastal systems acts as a buffer between land and sea. This natural buffer helps reduce flooding, erosion, and subsequent damage to property and infrastructure by slowing down the flow of water and dissipating waves during storms.

Salt marshes provide essential food, refuge, and nursery habitat for commercially and recreationally important species; improve water quality by filtering runoff and absorbing excess nutrients; and decrease the effects of climate change by storing large quantities of the greenhouse gas carbon dioxide from the atmosphere. Pretty impressive, right?! To maintain these numerous services, salt marshes need to persist and expand to counteract the effects of sea-level rise and storms that physically erode them.

Salt marsh growth and expansion are controlled by complex interactions between water level, sediment supply, and salinity, as well as land-use and human infrastructure such as seawalls, roads, and neighborhoods that may limit their ability to retreat landward. In order to track changes and trends in the extent and health of these coastal wetlands, land and resource managers within the U.S. Department of the Interior (DOI), state agencies, and NGOs or non-governmental organizations need metrics that provide a robust picture of both their stability and vulnerability. Understanding the dynamics and threats to salt marshes can inform strategies for prioritizing areas for restoration and associated investments in human infrastructure.

The USGS has shown that marsh resilience can be evaluated using a metric called the UnVegetated-Vegetated marsh Ratio (UVVR). It is defined as the ratio of unvegetated area to vegetated area across an entire marsh system, covering marsh plains, channels, ponds, and intertidal flats. Larger values of UVVR indicate more open water and less vegetative cover, which leads to more vulnerability to ongoing marsh loss.

Until recently, all UVVR assessments had been determined for an individual estuary or at state scales. These repeatable assessments demonstrated that UVVR could be used comprehensively for the entire nation to establish baseline metrics, identify the most vulnerable marshes, and inform management strategies. However, individual studies are labor-intensive and require multiple aerial surveys, detailed merging of elevation and imagery data, and the interpretation of multiple imagery classes. The solution? Landsat satellite imagery! USGS scientists developed a methodology to use Landsat 8 satellite imagery at a 30-meter resolution to map the coastal wetlands of the contiguous United States for 2014-2018. This product enables DOI and state managers to get broad assessments of the most vulnerable marshes without requiring site-specific studies.

Moving forward, the USGS aims to maintain regular delivery of updated UVVR assessments using aerial imagery, Landsat, and newer satellites to support marsh restoration efforts by the U.S. National Park Service (NPS), U.S. Fish and Wildlife Survey (FWS), and coastal state agencies. Cathy Johnson, a coastal ecologist and NPS Northeast Ocean and Coastal Resource Program Coordinator said, “The NPS is committed to climate change adaptation strategies that promote ecosystem resilience, including marsh restoration where appropriate, but resources to implement such activities are limited. Broad-scale UVVR mapping will help us to assess long-term viability of marsh units and prioritize salt marsh restoration areas to maximize long-term ecosystem benefits.” Additionally, the USFWS intends to use the UVVR in combination with other metrics to identify opportunities for potentially restoring high quality habitat along the Atlantic seaboard for the Salt Marsh Sparrow, an at-risk species that uses high elevation marshes for nesting. “If we want to reverse Saltmarsh Sparrow declines, we must work only in those marshes that are most likely to respond well to management action. The UVVR tool helps guide these decisions so that land managers can avoid those marshes with little chance of becoming high quality habitat and focus instead on those with a strong opportunity for conservation return,” said Aimee Weldon, the USFWS Atlantic Coast Joint Venture Coordinator.

The new data products complement detailed mapping by the USFWS’ National Wetland Inventory (NWI) program by enabling comparison of vulnerability between different wetland types differentiated by the NWI. The national map of UVVR can also be combined with the Coastal National Elevation Database (CoNED) to generate national estimates of marsh lifespan, under varying sea-level rise scenarios. Additionally, NASA DEVELOP has used the UVVR for a South Carolina Department of Natural Resources project and NOAA’s C-CAP will use the UVVR data to refine their habitat mapping. These metrics give managers robust decision-making tools to guide investment in restoration that ultimately protects our nation’s coastal communities and ecosystems.

Interested in exploring the nationwide UVVR data in an interactive map and learning about salt marsh vulnerability in your favorite coastal areas? You’re in luck! The UVVR data has been successfully added to the USGS Coastal Change Hazards Portal and is now a new item listed under the Sea Level Rise theme (salt marsh vulnerability).  This includes both the regional assessments and the national-scale work. The nationwide UVVR data map has also been included in the research team’s U.S. Coastal Wetland Synthesis geonarrative. In addition to the interactive map, the geonarrative provides details on the team’s motivation, the geospatial synthesis of coastal wetland data, and study sites for finished and ongoing wetland synthesis projects. Interested in downloading the data? The nationwide UVVR data is available to download in Science Base. 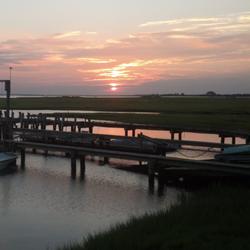 Estuarine processes, hazards, and ecosystems describes several interdisciplinary projects that aim to quantify and understand estuarine processes through observations and numerical modeling. Both the spatial and temporal scales of these mechanisms are important, and therefore require modern instrumentation and state-of-the-art hydrodynamic models. These projects are led from the U.S. Geological...
By
Natural Hazards, Coastal and Marine Hazards and Resources Program, Chesapeake Bay Activities, Woods Hole Coastal and Marine Science Center
link
February 1, 2019

Estuarine processes, hazards, and ecosystems describes several interdisciplinary projects that aim to quantify and understand estuarine processes through observations and numerical modeling. Both the spatial and temporal scales of these mechanisms are important, and therefore require modern instrumentation and state-of-the-art hydrodynamic models. These projects are led from the U.S. Geological...
Learn More
June 2, 2020

Coastal Wetlands: The State and Future of a Precious Resource

Coastal wetlands, and salt marshes specifically, are simultaneously geomorphic and biologic systems. They proliferate across a narrow range of elevation, water level, and salinity conditions. Salt marshes rely on their own growth and sediment input to maintain or increase their extent, whereas physical forces such as waves and sea-level rise tend to reduce it.