Vegetation response of a dry shrubland community to feral goat management on the island of Moloka‘i, Hawai‘i

View Report
The Hawaiian Islands are well known for their unique ecosystem assemblages that have a high proportion of endemic flora and fauna. However, since human colonization of this archipelago—starting with the arrival of Polynesian sailors approximately 1,200 years ago, and particularly following western contact in 1778—thousands of non-native species have been introduced to the Islands and many of these alien species have had severe impacts on the native ecosystems. Particularly damaging to these ecosystems are large mammals, including goats (Capra hircus), pigs (Sus scrofa), cattle (Bos taurus), deer (Axis axis and Odocoileus hemionus), and sheep (Ovis spp.), which are collectively referred to here as ungulates; they cause extensive damage to the native vegetation by their browsing, grazing, and trampling. Similar impacts have been documented elsewhere, including New Zealand and many other island ecosystems.
Previous studies in Hawai‘i have utilized fenced exclosures to assess the impacts of feral or wild ungulates on vegetation and the recovery potential for the native plant communities by comparing plant community composition, structure, and cover inside the fenced area (without ungulates) over time to the vegetation condition outside of the protection of the fence. In some cases, the native vegetation recovered once the animals were removed. However, in other situations alien plants were more competitive and dominated the revegetation process after the impacts of ungulates had been reduced or eliminated.
This report describes the response of a highly degraded lowland dry habitat plant community located on the south slope of east Moloka‘i, Hawai‘i, to reduction of browsing and grazing impacts caused by feral goats. For this study, vegetation response inside a fenced exclosure was compared to vegetation change in the area outside of the fence that was still accessible to goats. This study is part of the larger U.S. Geological Survey Ridge-to-Reef (USGS-R2R) research project conducted between 2008 and 2014 to better understand the magnitude of, and factors responsible for, increased erosion on Moloka‘i. The upslope erosion has resulted in heavy sedimentation of the near-shore coral reef ecosystem on the leeward side of the island. The project area and adjacent lands are managed by the East Moloka‘i Watershed Partnership (EMoWP) to restore the vegetation and reduce erosion on the leeward side of the island.
Specific questions addressed in this vegetation change study include: 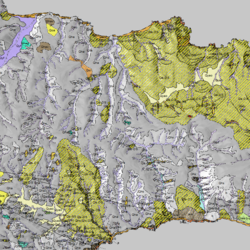 This project uses geologic and geomorphic mapping in the context of societally relevant problems in the Earth’s critical zone. Leveraging interdisciplinary research ties and interagency collaborations, it utilizes remote sensing data, corroborated with field observations, to determine i) the spatial distribution of geomorphic processes and ages of Quaternary deposits in the context of active...
Learn More