Preventing flood hazards, such as hurricane-induced tidal surge, from becoming human disasters requires an understanding of the relative risks floods pose to specific communities and knowledge of the processes by which flood waters rise, converge, and abate. Historically, hurricane-induced tidal surge has been documented through measurement of high-water marks left on structures or vegetation. These remnant signals are not always reliable or accurate, however, and do not provide quantitative information about the timing of flooding, the sequencing of multiple paths by which storm-surge waters arrive, or the magnitude of waves.

To gain better knowledge about the effects of hurricanes, the U.S. Geological Survey Caribbean-Florida Water Science Center (USGS-CFWSC), in cooperation with municipal, State, and Federal agencies, uses two monitoring approaches to measure the timing, magnitude, and duration of hurricane tidal surge. The first approach uses the existing fixed network of gages that provide "real-time" data on water levels, and the second uses tidal-surge sensors that are temporarily-deployed in advance of hurricanes. 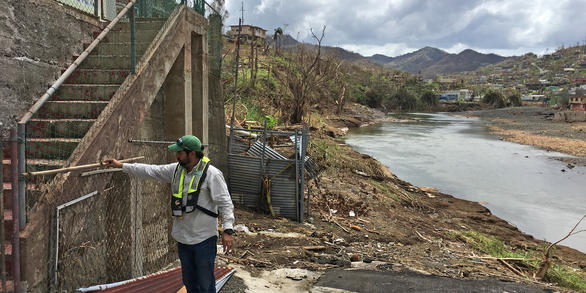 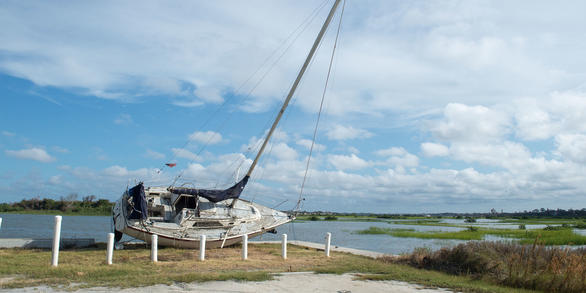 The USGS maintains a network of real-time gaging stations along the Florida and Puerto Rico coasts. These stations record data at 15-minute intervals that are available on the web at water.usgs.gov, and include measurements of water level, velocity, specific conductance, salinity, temperature, nitrogen, turbidity, pH, chlorophyll, blue green algae, and dissolved oxygen. The real-time network monitors a large range of hydrologic conditions, from droughts to floods, and provides the data on the web for a broad base of stakeholders. In the event of a hurricane, the real-time network allows individuals to monitor the storm-surge data in near real time (maximum 1-hour delay). Depending on the elevation of the gage-house structure, real-time gages may be at risk of being inundated by flood waters during extreme storm surges.

To augment the real-time gaging network, a temporary network of hurricane storm-surge sensors can be deployed prior to a hurricane that record data at 30-second intervals. As part of this monitoring approach, water-level and barometric-pressure sensors are deployed to areas of projected hurricane landfall. The addition of these sensors creates a concentrated network of storm-surge monitors that provide more spatially-dense information on hurricane tidal surge. For example, temporary deployment of sensors in the projected hurricane path can be placed to monitor the escalation and attenuation of the hurricane storm surge along coastal rivers and across barrier islands, low-lying areas, and wetlands. After the passing of a storm the locations of the temporarily-deployed sensors must be surveyed to a known elevation. The USGS has successfully deployed temporary tidal surge-networks for Hurricanes Rita (2005), Wilma (2005), Gustav (2008), Ike (2008), Irene (2011), Hermine (2016), Matthew (2016), Irma, 2017, Maria (2017), and Michael (2018) Tropical Storm Ernesto (2006), and Isaac (2018).

CFWSC had been responding to the rains and flooding being forecast by ensuring that USGS real-time gages are operational and providing critical information on river stage and rainfall to the public, National Weather Service, and emergency management officials. In addition, USGS will deploy staff to make streamflow measurements at streamgages across the state to verify and update the river stage and streamflow discharge ratings. These ratings are critical for determining the volume of water that passes a streamgaging station at any given river stage and are used in issuing flood warnings, mapping floodplains, monitoring water-quality and environmental conditions, and managing water resources.

The use of existing fixed network stations along with temporarily-deployed water-level and barometric pressure sensors provides a cost-effective hurricane storm-surge monitoring network for Florida and Puerto Rico. The combined networks effectively leverage resources of many cooperative funding agencies in Florida and Puerto Rico to monitor hurricane storm surge. The data are a valuable resource for emergency preparedness agencies to better protect public safety, for engineers to improve structural design of coastal infrastructures, and for oceanographers to evaluate and improve hurricane storm-surge computer models.

Below are videos associated with Hurricanes and Floods. 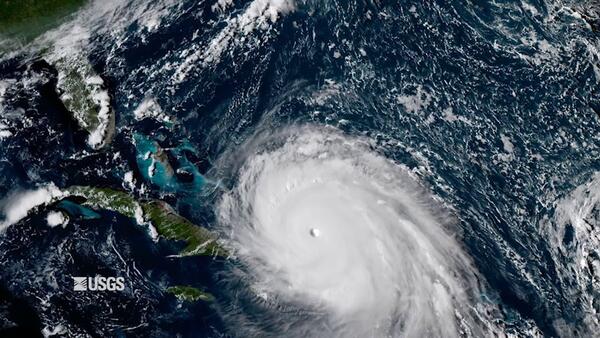 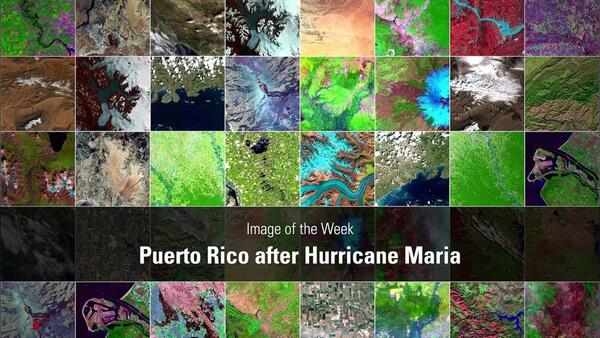 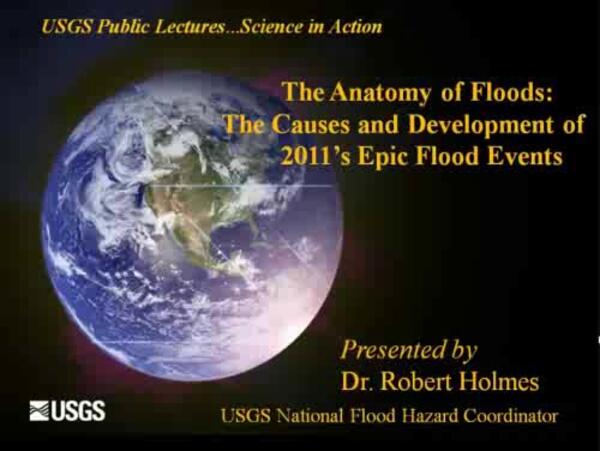 Hurricane Maria made landfall south of Yabucoa Harbor, Puerto Rico, as a category 4 hurricane with maximum sustained winds of 155 miles per hour on September 20, 2017. The hurricane devastated much of the U.S. Virgin Islands and Puerto Rico. The U.S. Geological Survey (USGS), in cooperation with Federal Emergency Management Agency, installed a temporary monitoring network of 13 water-level and bar
By
Caribbean-Florida Water Science Center (CFWSC)
June 17, 2019

Monitoring storm tide from Hurricane Michael along the northwest coast of Florida, October 2018

Hurricane Michael made landfall near Mexico Beach and Tyndall Air Force Base in the Florida Panhandle, with maximum sustained winds over 160 miles per hour, on October 10, 2018. The maximum recorded storm tide was 15.55 feet above the North American Vertical Datum of 1988 (NAVD 88). The elevation of the maximum high-water mark, found in Port St. Joe, Florida, exceeded 20 feet above NAVD 88. The st
By
Caribbean-Florida Water Science Center (CFWSC)
October 2, 2018

Monitoring storm tide and flooding from Hurricane Matthew along the Atlantic coast of the United States, October 2016

IntroductionHurricane Matthew moved adjacent to the coasts of Florida, Georgia, South Carolina, and North Carolina. The hurricane made landfall once near McClellanville, South Carolina, on October 8, 2016, as a Category 1 hurricane on the Saffir-Simpson Hurricane Wind Scale. The U.S. Geological Survey (USGS) deployed a temporary monitoring network of storm-tide sensors at 284 sites along the Atlan
By
Water Resources, South Atlantic Water Science Center (SAWSC)
June 30, 2013

Meeting the Science Needs of the Nation in the Wake of Hurricane Sandy-- A U.S. Geological Survey Science Plan for Support of Restoration and Recovery

Floods in Florida due to Tropical Storm Fay, August 15 through September 26, 2008

Temporary monitoring stations employing non-vented pressure transducers were used to augment an existing U.S. Geological Survey coastal monitoring network to document the inland water levels related to the storm tide of Hurricane Wilma on the southwestern coast of Florida. On October 22, 2005, an experimental network consisting of 30 temporary stations was deployed over 90 miles of coastline to re
By
Ecosystems, Wetland and Aquatic Research Center
April 24, 2005

Hurricane Frances brought heavy rainfall and widespread flooding to southwest-central Florida September 4-14, 2004. The center of Hurricane Frances made landfall on the east coast of Florida on September 5 as a category 2 hurricane on the Saffir-Simpson scale, then moved west-northwestward through central Florida before exiting Pasco County into the Gulf of Mexico on September 6 (fig. 1; National
November 30, 2001