The first of our two tales focuses on a group of scientists who uses drones to measure methane from thawing permafrost as a way to predict areas of coastal bluff slumping and erosion in Alaska’s North Slope. The second story highlights USGS and NASA scientists who use experimental sensors mounted on drones to measure methane released as permafrost forests thaw into wetlands in the interior of Alaska.

USGS scientist Ferdinand Oberle has begun testing an inexpensive technique for measuring methane escaping from thawing permafrost in coastal Arctic bluffs. The system uses off-the-shelf industrial components mounted on a drone aircraft. A test of the methane detector on Barter Island, Alaska, has proven to be more sensitive than originally expected. Data collected along 1.25 miles of coastal bluffs has revealed spots where methane emissions were particularly high, which has been linked to zones of accelerated slumping and erosion.

Because methane is a powerful greenhouse gas, many institutions and scientists have been trying to determine how much escapes from the land and the sea into the atmosphere. To do this, they typically rely on satellite imagery, data from sensors on manned aircraft, and samples collected on the ground.

“Up until now, methane measurements have been limited to large research institutions, government agencies and so on, because they’re extremely costly…hundreds of thousands of dollars,” says Ferdinand Oberle, USGS Mendenhall Postdoctoral Research Fellow and designer of the new methane-measurement technique. The system designed for this study costs much less – approximately $2,500 for a month of use or $14,000 for a permanent purchase.

“It opens the door,” says Oberle, “so that anybody can do repeated studies at a relatively low cost, each year, to see how the pattern of methane release changes in coastal environments.”

Oberle and his co-authors from the USGS Pacific Coastal and Marine Science Center have been studying erosion along the Arctic permafrost coast, which is one of the most dramatically changing environments in the world. Previous research has shown that erosion is generally increasing along Alaska’s north coast, with the shoreline retreating an average of 4.5 feet per year and, in some stretches, more than 65 feet per year. The researchers aim to determine the dominant forces behind this erosion, which threatens villages, wildlife habitats, and oil- and gas-production facilities.

“Usually, bluff erosion can only be detected after the fact,” says Oberle. “Once things have started to erode, you can see that permafrost has thawed and collapsed. We’re trying to identify areas of erosion through methane release and develop an early detection system."

The results look promising so far. Data collected during September 2017 show methane hotspots were closely associated with melt-water run-off channels, a clear sign of thawing permafrost. The scientists plan to return to Barter Island at the end of the summer of 2019 to see whether the drone-based detection system can predict erosion hotspots through early identification of methane emissions. Oberle is optimistic, though he cautions that it will probably take years of data to see if there really is a relationship between the two phenomena.

Meanwhile, the published methodology has sparked the interest of scientists from NASA’s Jet Propulsion Laboratory, who are keen to see if drones can be used to fill the gap between airplane-based methane observations and ground-based measurements.

Findings from this Barter Island study can be found in “Determining spatial methane distribution on Arctic permafrost bluffs with a low-cost unmanned aerial system,” published March 2019 in SN Applied Sciences.

Scientists have seen that increasing global temperatures have begun to melt permafrost in parts of Alaska and will likely cause a near-complete thaw of surface permafrost in interior Alaska over the decades to come. This thawing turns permafrost forests into bogs or wetlands. These wetlands release a significant amount of trapped carbon as methane gas into the atmosphere, further driving the effects of climate change. Traditionally, scientists have monitored methane emissions using stationary flux sensors mounted on towers or with chambers placed on the soil surface. However, new technologies now offer new opportunities for scientists to collect methane data.

Recently, USGS scientists have begun mounting miniature laser spectrometers on drones in an attempt to detect methane emissions from the interior Alaska wetlands. To test the accuracy of these new sensors, scientists have begun to compare their drone-collected data to the data recorded by flux towers and surface chambers in the same location. Measurements from these sites can show if there are large variations in methane emissions.

While flux towers and surface chambers have provided important scientific insights into the amount of methane and carbon dioxide being released from bogs and the surrounding permafrost forests, these techniques also have limitations. For example, these instruments must be fixed in place and are often expensive to maintain. Therefore, only a few sites within Alaska use them.

“If this new drone-based measurement technique is successful,” said Kristen Manies, USGS ecologist and principal investigator for the project, “we can look at bogs and other wetlands all across Alaska. Having data from wetlands all across the state will allow us to determine how variable methane emissions are and allow us to look for factors that predict these fluxes.”

USGS scientists collaborated with NASA’s Jet Propulsion Lab (JPL) and Ames Research Center scientists and engineers for this experiment to take advantage of their existing expertise in sensor development, equipment testing, and configuring of drones for novel operations.

“By adapting JPL’s technology to natural environments, USGS can advance its capabilities in measurement of low-level gas emissions from soil,” noted Manies. 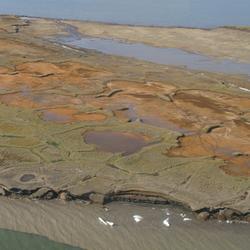 The Arctic region is warming faster than anywhere else in the nation. Understanding the rates and causes of coastal change in Alaska is needed to identify and mitigate hazards that might affect people and animals that call Alaska home.
By
Natural Hazards, Coastal and Marine Hazards and Resources Program, Pacific Coastal and Marine Science Center
link
October 15, 2021

The Arctic region is warming faster than anywhere else in the nation. Understanding the rates and causes of coastal change in Alaska is needed to identify and mitigate hazards that might affect people and animals that call Alaska home.
Learn More
link 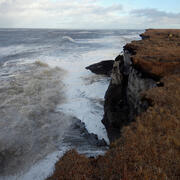 The impacts of climate change and sea-level rise around the Pacific and Arctic Oceans can vary tremendously. Thus far the vast majority of national and international impact assessments and models of coastal climate change have focused on low-relief coastlines that are not near seismically active zones. Furthermore, the degree to which extreme waves and wind will add further stress to coastal...
By
Natural Hazards, Coastal and Marine Hazards and Resources Program, Pacific Coastal and Marine Science Center
link
September 1, 2021

The impacts of climate change and sea-level rise around the Pacific and Arctic Oceans can vary tremendously. Thus far the vast majority of national and international impact assessments and models of coastal climate change have focused on low-relief coastlines that are not near seismically active zones. Furthermore, the degree to which extreme waves and wind will add further stress to coastal...
Learn More 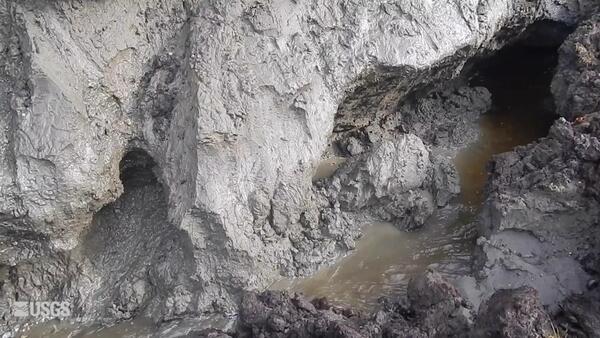 Arctic permafrost stores vast amounts of methane (CH4) in subsurface reservoirs. Thawing permafrost creates areas for this potent greenhouse gas to be released to the atmosphere. Identifying ‘hot spots’ of methane flux on a local scale has been limited by the spatial scales of traditional ground-based or satellite-based methane-sampling methods. Here we present a reliable and an easily replicable
By
Natural Hazards, Climate Research and Development Program, Coastal and Marine Hazards and Resources Program, Pacific Coastal and Marine Science Center
September 24, 2017

Long-term rates of shoreline change for the north coast of Alaska, from the U.S.-Canadian border to the Icy Cape region of northern Alaska, have been updated as part of the U.S. Geological Survey’s National Assessment of Shoreline Change Project. Short-term shoreline change rates are reported for the first time. Additional shoreline position data were used to compute rates where the previous rate-
By
Pacific Coastal and Marine Science Center