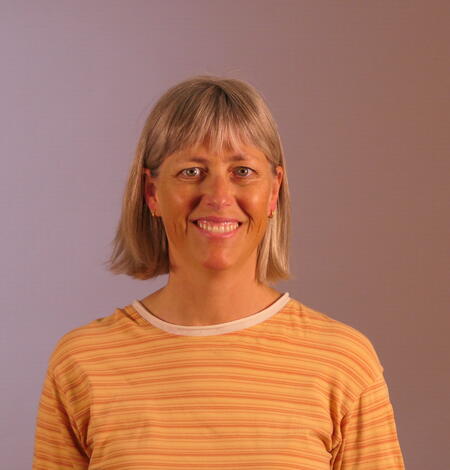 Kristen is an Ecologist with Geology, Minerals, Energy, and Geophysics Science Center in Menlo Park, CA. She studies how disturbances affect the carbon cycle, with the majority of her research focusing on the boreal region of Alaska and Canada.

Kristen's research explores how disturbance affects the global carbon cycle.  Carbon enters soil from dead plant material and exits the soil through decomposition and root respiration. The amount of carbon stored in soil is the sum of these inputs minus the sum of loses. Understanding what controls this balance is important because 1) there is nearly three times the amount of carbon in soils than in the atmosphere, so changes in soil carbon storage can have large impacts on the amount of atmospheric carbon, and 2) soil carbon is tied to soil health.

For most of her career Kristen has been focused on the carbon cycle of the boreal region of Interior Alaska and Canada. Boreal soils are known carbon sinks, meaning that more carbon enters than leaves the soil. However, boreal regions are experiencing a great deal of warming due to climate change. This warming is causing more and higher intensity fires. It is also thawing the permafrost, or frozen soil, that underlies much of the boreal region. These disturbances have the potential to impact not just the amount of carbon entering and leaving the soil, but also the way carbon moves through these ecosystems and rates of this movement. Kristen's research looks for these changes. 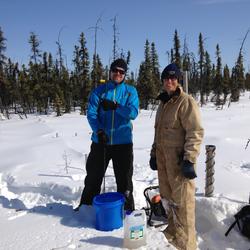 Warming and thawing of permafrost soils in the Arctic is expected to become widespread over the coming decades. Permafrost thaw changes ecosystem structure and function, affects resource availability for wildlife and society, and decreases ground stability which affects human infrastructure. Since permafrost soils contain about half of the global soil carbon (C) pool, the magnitude of C losses...
By
Climate Research and Development Program, Geology, Minerals, Energy, and Geophysics Science Center
link
January 25, 2021

Warming and thawing of permafrost soils in the Arctic is expected to become widespread over the coming decades. Permafrost thaw changes ecosystem structure and function, affects resource availability for wildlife and society, and decreases ground stability which affects human infrastructure. Since permafrost soils contain about half of the global soil carbon (C) pool, the magnitude of C losses...
Learn More
October 29, 2021

Boreal ecosystems comprise one tenth of the world’s land surface and contain over 20 % of the global soil carbon (C) stocks. Boreal soils are unique in that its mineral soil is covered by what can be quite thick layers of organic soil. These organic soil layers, or horizons, can differ in their state of decomposition, source vegetation, and disturbance history. These differences result in varying
By
Climate Research and Development Program, Land Change Science Program, Volcano Hazards, Volcano Science Center, Geology, Minerals, Energy, and Geophysics Science Center
February 28, 2017

Peatlands play an important role in boreal ecosystems, storing a large amount of soil organic carbon. In northern ecosystems, collapse-scar bogs (also known as thermokarst bogs) often form as the result of ground subsidence following permafrost thaw. To examine how ecosystem carbon balance changes with the loss of permafrost, we measured carbon and nitrogen storage within a thermokarst bog and the
By
Volcano Hazards, Volcano Science Center
August 18, 2016

Boreal soils play a critical role in the global carbon (C) cycle; therefore, it is important to understand the mechanisms that control soil C accumulation and loss for this region. Examining C & nitrogen (N) accumulation rates over decades to centuries may provide additional understanding of the dominant mechanisms for their storage, which can be masked by seasonal and interannual variability when
By
Volcano Hazards, Volcano Science Center
July 28, 2016

This report describes the collection and processing methodologies for samples obtained at two sites within Interior Alaska: (1) a location within the 2001 Survey Line burn, and (2) an unburned location, selected as a control. In 2002 and 2004 U.S. Geological Survey investigators measured soil properties including, but not limited to, bulk density, volumetric water content, carbon content, and nitr
April 3, 2013

Soils of the Northern Circumpolar Permafrost region harbor 1,672 petagrams (Pg) (1 Pg = 1,000,000,000 kilograms) of organic carbon (OC), nearly 50 percent of the global belowground OC pool (Tarnocai and others, 2009). Of that soil OC, nearly 88 percent is presently stored in perennially frozen ground. Recent climate warming at northern latitudes has resulted in warming and thawing of permafrost in
November 28, 2012

Post-fire storage of carbon (C) in organic-soil horizons was measured in one Canadian and three Alaskan chronosequences in black spruce forests, together spanning stand ages of nearly 200 yrs. We used a simple mass balance model to derive estimates of inputs, losses, and accumulation rates of C on timescales of years to centuries. The model performed well for the surface and total organic soil lay
By
Volcano Hazards, Volcano Science Center
link
May 15, 2019

Boreal vegetation and cycling of carbon and nitrogen

This article is part of the Spring 2017 issue of the Earth Science Matters Newsletter.