South Cascade Glacier is located in the midlatitude maritime climate of the North Cascade Mountains of Washington State. Glacier observations began at this site in 1958.

Return to Glaciers and Climate Project

South Cascade Glacier located in a north-northwest facing valley near the crest of the Cascade Range in northwest Washington state. Dominated by a maritime climate, the glacier receives heavy annual precipitation, exceeding 4.5 m in places (PRISM Climate Group, 2006) and is heavily influenced by climate conditions in the Pacific Ocean (Walters and Meier, 1989). In 2015, South Cascade glacier had an area of 1.8 km2 in the 6.14 km2 South South Cascade Lake Basin (O'Neel et al, 2019). The glacier spans nearly 660 m in elevation in the steep sided basin which forms the headwaters of the South Fork of the Cascade River.

In 1959 scientists with the USGS began collecting mass balance data on South Cascade Glacier, one of four "benchmark glaciers" in the US. R Repeated point measurements at established index sites, in conjunction with local meteorology and runoff data, are used to estimate glacier-wide mass balances. These data constitute the longest continuous set of mass-balance data in North America (Josberger and others, 2007) which are used to understand glacier dynamics and hydrology, and to measure the glacier's response to climate change.

In 1959 the USGS began a suite of continuous mass balance measurements at South Cascade Glacier, one of four benchmark glaciers in North America. Extensive glaciological measurements within the basin include: streamflow runoff, precipitation, air temperature, barometric pressure, snow thickness and density, ice ablation, surface speed, and surface altitude. Multiple site visits are made annually for facility maintenance, instrument repair and installation, and direct measurement of snow and ice. There are six stakes dispersed along a center transect from the terminus to the head of the glacier where measurements of ice ablation, and snow depth and density are repeated annually.

Direct field measurements are combined with weather data and imagery analyses to calculate the seasonal and annual mass balance of each glacier. Access all the data here.

Meteorological observations began in 1959 with installation of temperature and precipitation instruments at several locations in the basin. At the Salix Creek and Middle Tarn gaging station air temperature is measured with thermistor-based sensors in passively ventilated radiation shields, between 3-3.5 m above the ground. At the Hut, air temperature, wind speed, and incoming solar radiation are measured about 1.5 m above the roof.

Air temperature at a constant height of 2.0 m above the glacier surface has also been collected during summer months for a portion of the period of record at South Cascade Glacier.

Liquid precipitation is measured by means of tipping bucket rain gage at Salix and Middle Tarn gaging stations. These unheated gages do not account for precipitation in the form of snow so the record of precipitation at both sites is limited to summer catch.

Runoff from Middle Tarn basin was computed from discharge of the South Fork of the Cascade River where it empties from Middle Tarn. Details of calculations and determination of rating curves can be found in USGS summaries of balance years.

South Cascade glacier, the site of one of North America's longest glacier mass balance records, has been the focus of many facets of glacier research over the years. The world's first radio-echo sounding measurements in temperate ice were conducted on South Cascade Glacier and subglacial water flow have been studied on this glacier, among various other studies aimed at advancing the understanding glaciers. More Info South Cascade Glacier | Glaciers of the American West 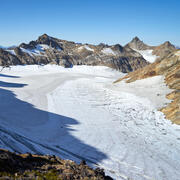 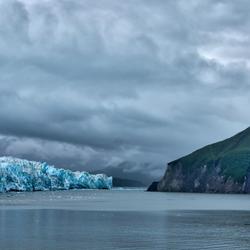 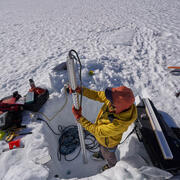 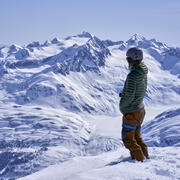 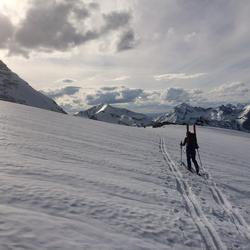 Sperry Glacier is located along the Continental Divide within Glacier National Park, Montana. It represents the midlatitude continental or transitional climate. Glacier observations began at this site in 2005.
By
Climate Research and Development Program
link
February 18, 2022

Sperry Glacier is located along the Continental Divide within Glacier National Park, Montana. It represents the midlatitude continental or transitional climate. Glacier observations began at this site in 2005.
Learn More
link 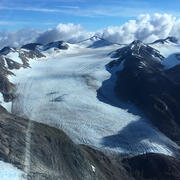 Lemon Creek Glacier is located in the high-latitude maritime region of Alaska, at the southernmost tip of the Juneau Icefield. Glacier observations began at this site in 1953.
By
Climate Research and Development Program, Alaska Science Center
link
February 18, 2022

Lemon Creek Glacier is located in the high-latitude maritime region of Alaska, at the southernmost tip of the Juneau Icefield. Glacier observations began at this site in 1953.
Learn More
link 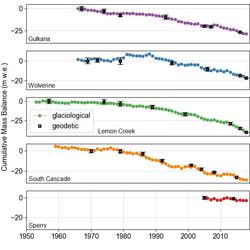 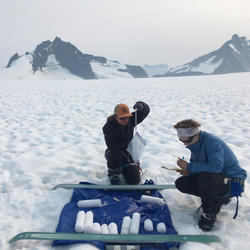 Nearly all Earth's alpine glaciers are losing ice, usually expressed as loss of mass. Rates of mass loss for North American glaciers are among the highest on Earth (Gardner, 2013) and shrinking glaciers are often the most visible indicators of mountain ecosystems responding to climate change.
By
Climate Research and Development Program
link
February 18, 2022

Nearly all Earth's alpine glaciers are losing ice, usually expressed as loss of mass. Rates of mass loss for North American glaciers are among the highest on Earth (Gardner, 2013) and shrinking glaciers are often the most visible indicators of mountain ecosystems responding to climate change.
Learn More 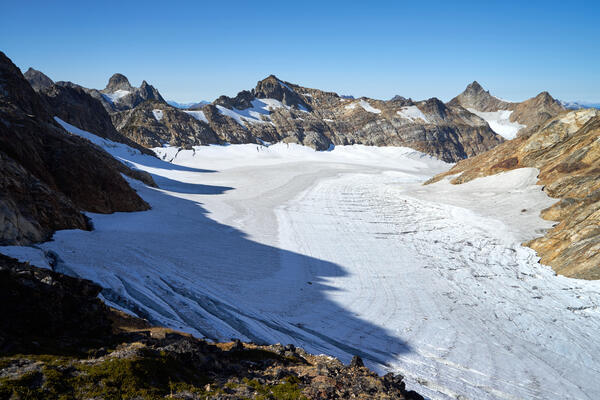 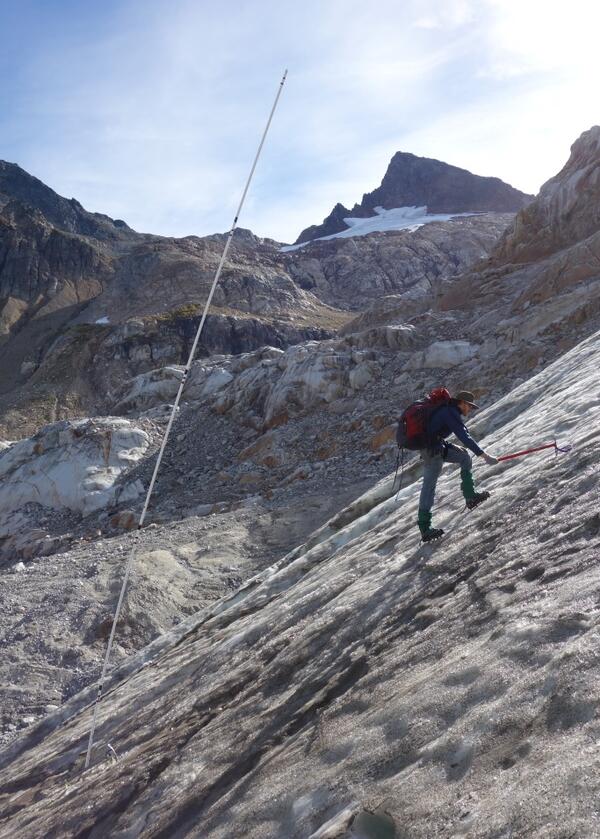 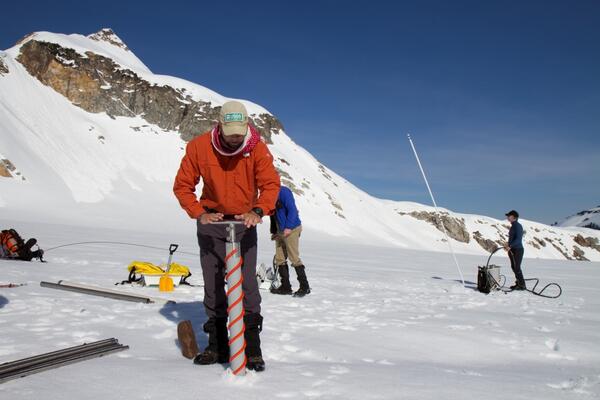 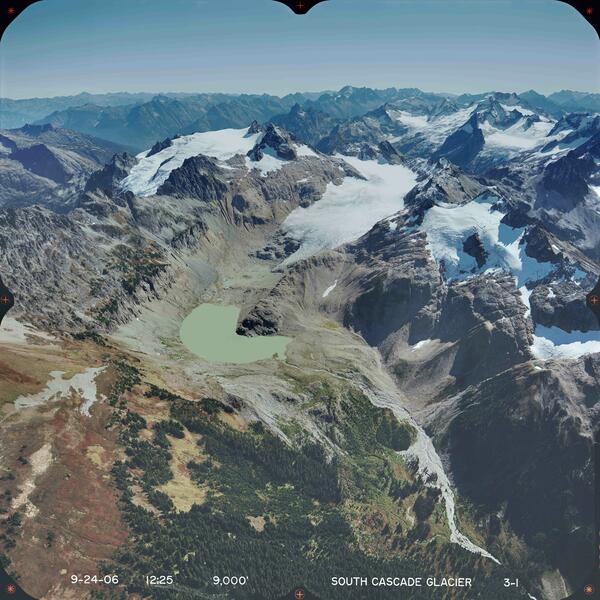 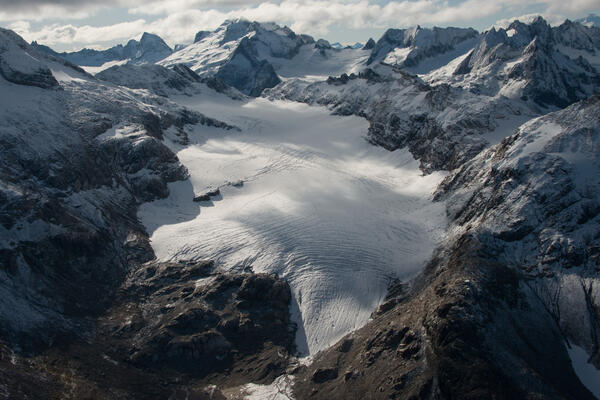 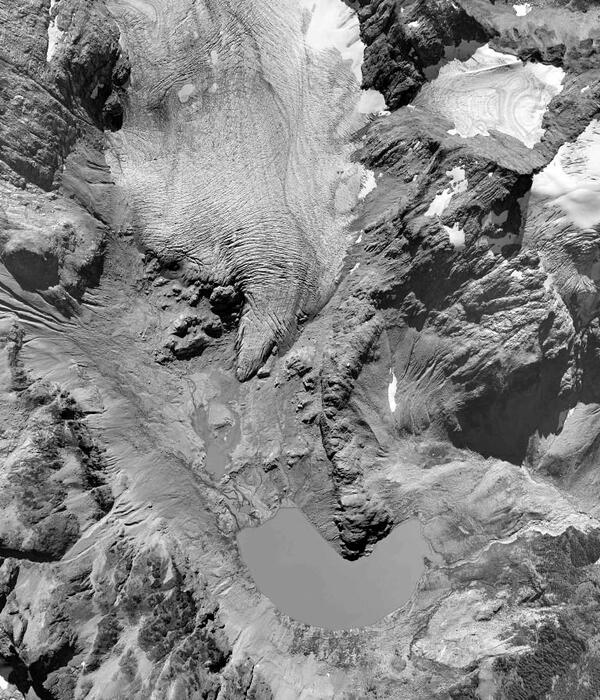 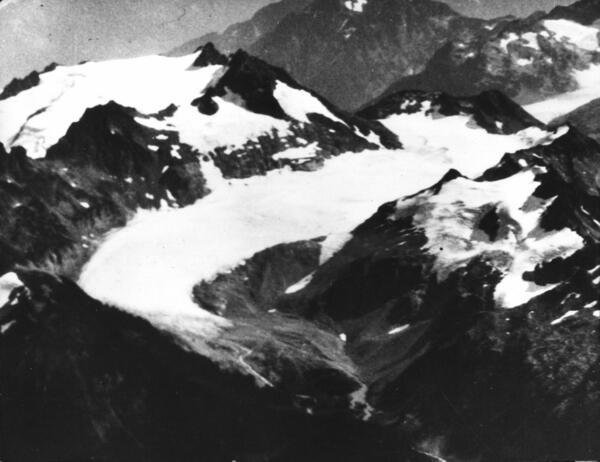 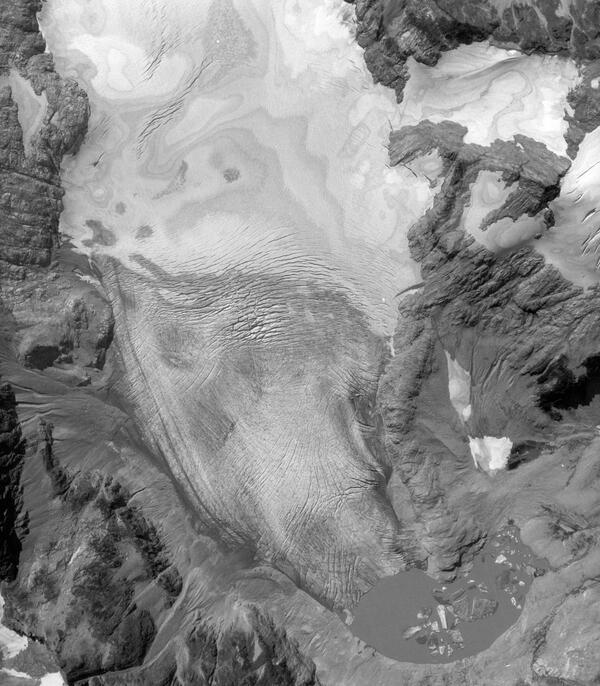 We reanalyzed mass balance records at Taku and Lemon Creek Glaciers to better understand the relative roles of hypsometry, local climate and dynamics as mass balance drivers. Over the 1946–2018 period, the cumulative mass balances diverged. Tidewater Taku Glacier advanced and gained mass at an average rate of +0.25±0.28 m w.e. a–1, contrasting with retreat and mass loss of –0.60±0.15 m w.e. a-1 at
By
Climate Research and Development Program, Land Change Science Program, Alaska Science Center
December 6, 2019

Glacier recession since the Little Ice Age: Implications for water storage in a Rocky Mountain landscape

Glacial ice is a significant influence on local climate, hydrology, vegetation, and wildlife. We mapped a complete set of glacier areas from the Little Ice Age (LIA) using very high-resolution satellite imagery (30-cm) within Glacier National Park, a region that encompasses over 400,000 hectares. We measured glacier change across the park using LIA glacier area as a baseline and used this to estim
By
Ecosystems, Climate Research and Development Program, Northern Rocky Mountain Science Center
November 22, 2018

Local topographically driven processes – such as wind drifting, avalanching, and shading – are known to alter the relationship between the mass balance of small cirque glaciers and regional climate. Yet partitioning such local effects from regional climate influence has proven difficult, creating uncertainty in the climate representativeness of some glaciers. We address this problem for Sperry Gla
By
Ecosystems, Northern Rocky Mountain Science Center
July 1, 2017

Temperature and precipitation are key determinants of snowpack levels. Therefore, climate change is likely to affect the role of snow and ice in the landscapes and hydrology of the Chugach National Forest region.Downscaled climate projections developed by Scenarios Network for Alaska and Arctic Planning (SNAP) are useful for examining projected changes in snow at relatively fine resolution using a
By
Ecosystems, Climate Adaptation Science Centers
April 1, 2017

Glacier hypsometry provides a first‐order approach for assessing a glacier's response to climate forcings. We couple the Randolph Glacier Inventory to a suite of in situ observations and climate model output to examine potential change for the ∼27,000 glaciers in Alaska and northwest Canada through the end of the 21st century. By 2100, based on Representative Concentration Pathways (RCPs) 4.5–8.5
By
Ecosystems, Alaska Science Center