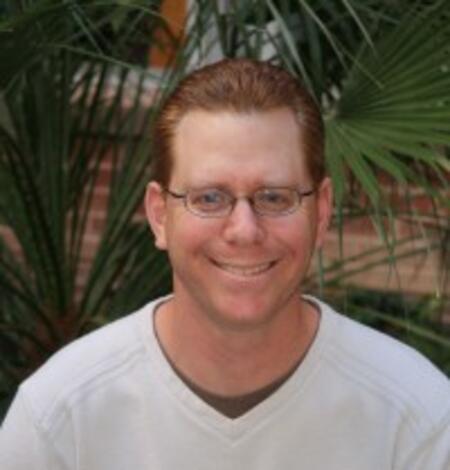 Brent Sigafus grew up in Tucson and began working with the USGS as an undergraduate at the University of Arizona in 2000, creating a specimen inventory data­base in collaboration with the USGS and National Park Service for the National Park Service Inventory and Monitoring Program. After graduating with a B.S. in natural resources, he became a volunteer for the USGS, focusing on data collection for bullfrogs and other desert amphibians, as well as assisting with mapping bullfrog dispersal. He began working with the USGS full-time in 2001 as a University of Arizona, Research Specialist for herpe­tologist Cecil Schwalbe. In 2009 Brent switched from a University employee to a USGS employee as a Biologist allowing him to expand into other scientific and support roles.

These days, Brent wears many hats. As a biologist, working on the Amphibian Research and Monitoring Initiative (https://armi.usgs.gov/),  he supports amphibian projects across Arizona.  Most of his time now is spent as the Collateral Duty Safety Program Director for the Southwest Biological Science Center leading all aspects of safety support from instructing classes like Wilderness First Aid and Animal Behavior to implementation of procedures and policies to keep our workforce safe. On a Bureau level he is the Southwest and Northwest-Pacific Islands Regional Firearms Safety Manager where he instructs others on the safe handling of firearms for Defense Against Wild Animals and Specimen Collection. 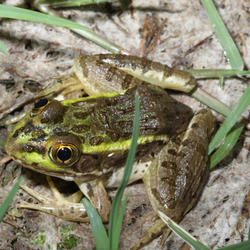 Modeling Colonization of a Population of Chiricahua Leopard Frogs

Modeling Colonization of a Population of Chiricahua Leopard Frogs

Managing a species with intensive tools like reintroduction may focus on single sites or entire landscapes. For mobile species like the federally-threatened Chiricahua leopard frog (Lithobates chiricahuensis [CLF]), both suitable colonization sites and suitable dispersal corridors between sites are needed. Following the eradication of the invasive American bullfrog (Lithobates catesbeianus) from...
Learn More
link 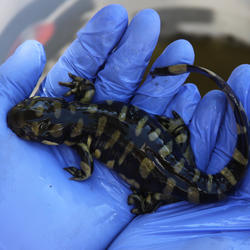 Information on disease presence can be of use to natural resource managers, especially in areas supporting threatened and endangered species that occur coincidentally with species that are suspected vectors for disease. A general sense of pathogen presence (or absence) can inform management directed at threatened and endangered species, especially in regions where disease is suspected to have...
By
Ecosystems, Biological Threats and Invasive Species Research Program, Species Management Research Program, Wildlife Program (unpublished), Southwest Biological Science Center
link
December 5, 2016

Information on disease presence can be of use to natural resource managers, especially in areas supporting threatened and endangered species that occur coincidentally with species that are suspected vectors for disease. A general sense of pathogen presence (or absence) can inform management directed at threatened and endangered species, especially in regions where disease is suspected to have...
Learn More
Filter Total Items: 18
December 8, 2022

Invasive species and emerging infectious diseases are two of the greatest threats to biodiversity. American Bullfrogs (Rana [Lithobates] catesbeiana), which have been introduced to many parts of the world, are often linked with declines of native amphibians via predation and spreading emerging pathogens such as amphibian chytrid fungus (Batrachochytrium dendrobatidis [Bd]) and ranaviruses. Althoug
By
Ecosystems, Fort Collins Science Center, Northern Rocky Mountain Science Center, Southwest Biological Science Center
March 3, 2022

Distribution of tiger salamanders in northern Sonora, Mexico: Comparison of sampling methods and possible implications for an endangered subspecies

For species with variable phenology, it is often challenging to produce reliable estimates of population dynamics or changes in occupancy. The Arizona Toad (Anaxyrus microscaphus) is a southwestern USA endemic that has been petitioned for legal protection, but status assessments are limited by a lack of information on population trends. Also, timing and consistency of Arizona Toad breeding varies
By
Ecosystems, Fort Collins Science Center, Northern Rocky Mountain Science Center, Southwest Biological Science Center
February 25, 2021

First-order dynamic occupancy models (FODOMs) are a class of state-space model in which the true state (occurrence) is observed imperfectly. An important assumption of FODOMs is that site dynamics only depend on the current state and that variations in dynamic processes are adequately captured with covariates or random effects. However, it is often difficult to understand and/or measure the covari
By
Ecosystems, Eastern Ecological Science Center, Northern Rocky Mountain Science Center, Patuxent Wildlife Research Center
August 11, 2020

American bullfrogs (Lithobates catesbeianus) are significant invaders in many places and can negatively impact native species. Despite their impact and wide distribution, little is known about their demography. We used five years of capture mark-recapture data to estimate annual apparent survival of post-metamorphic bullfrogs in a population on the Buenos Aires National Wildlife Refuge in their in
By
Ecosystems, Fort Collins Science Center, Northern Rocky Mountain Science Center, Southwest Biological Science Center
January 9, 2020

Invasive species are a major threat to the persistence of native species, particularly in systems where ephemeral aquatic habitats have been replaced by permanent water and predators, such as fish, have been introduced. Within the Altar Valley, Arizona, the invasive American bullfrog, Lithobates catesbeianus (formerly Rana catesbeianus), has been successfully eradicated to help recover Chiricahua
By
Ecosystems, Fort Collins Science Center, Northern Rocky Mountain Science Center, Southwest Biological Science Center
July 30, 2019

Using full and partial unmixing algorithms to estimate the inundation extent of small, isolated stock ponds in an arid landscape

Many natural wetlands around the world have disappeared or been replaced, resulting in the dependence of many wildlife species on small, artificial earthen stock ponds. These ponds provide critical wildlife habitat, such that the accurate detection of water and assessment of inundation extent is required. We applied a full (linear spectral mixture analysis; LSMA) and partial (matched filtering; MF
By
Ecosystems, Southwest Biological Science Center
April 30, 2018

Status of the threatened Chiricahua Leopard Frog and conservation challenges in Sonora, Mexico, with notes on other ranid frogs and non-native predators

In North America, ranid frogs (Ranidae) have experienced larger declines than any other amphibian family, particularly species native to the southwestern USA and adjacent Mexico; however, our knowledge of their conservation status and threats is limited in Mexico. We assessed the status of the federally listed as threatened (USA) Chiricahua Leopard Frog (Lithobates chiricahuensis) in Sonora, Mexic
By
Ecosystems, Northern Rocky Mountain Science Center
link
September 28, 2018

Amphibian species and community richness has been declining in North America and climate change may play a role in these declines. Global climate...