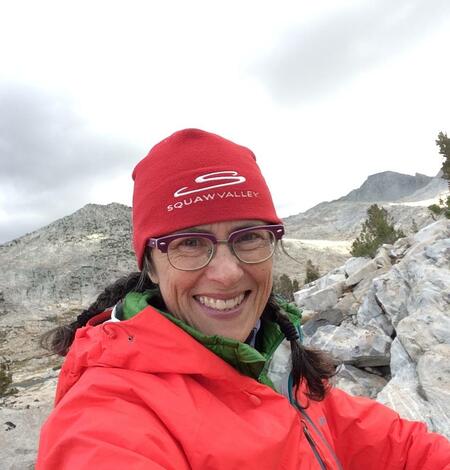 Dr. Erin Muths is a Zoologist at the Fort Collins Science Center who specializes in amphibian demography, disease ecology and conservation.

Dr. Muths holds a doctorate in Zoology from the University of Queensland, Australia. Since joining the USGS in 1995, she has studied amphibians in Colorado and around the world. Dr. Muths specializes in amphibian demography, disease ecology and conservation. Current research projects include reintroductions of boreal toads in Rocky Mountain National Park, demography of chorus frog and boreal toad populations in Colorado and Wyoming, and salamander disease and occurrence in the desert southwest and Mexico. She is on several graduate student committees at Colorado State University, the University of Colorado and at the CCMB Laboratory for Conservation of Endangered Species in Hyderabad, India.

Conservation research across scales in a national program: How to be relevant to local management yet general at the same time

Successfully addressing complex conservation problems requires attention to pattern and process at multiple spatial scales. This is challenging from a logistical and organizational perspective. In response to indications of worldwide declines in amphibian populations, the Amphibian Research and Monitoring Initiative (ARMI) of the United States Geological Survey was established in 2000. This nation
By
Ecosystems, Forest and Rangeland Ecosystem Science Center, Fort Collins Science Center
March 22, 2019

1. Wetlands are critical components of freshwater biodiversity and provide ecosystem services, but human activities have resulted in large-scale loss of these habitats across the globe. To offset this loss, mitigation wetlands are frequently constructed, but their ability to replicate the functions of natural wetlands remains uncertain. Further, monitoring of mitigation wetlands is limited and oft
By
Ecosystems, Fort Collins Science Center, Northern Rocky Mountain Science Center
December 4, 2018

Identifying population declines before they reach crisis proportions is imperative given the current global decline in vertebrate fauna and associated challenges and expense of recovery. Understanding life histories and how the environment influences demography are critical aspects of this challenge, as is determining the biological relevance of covariates that are best supported by the data. We u
By
Ecosystems, Fort Collins Science Center
October 25, 2018

Movement of individuals has been described as one of the best studied, but least understood concepts in ecology. The magnitude of movements, routes, and probability of movement have significant application to conservation. Information about movement can inform efforts to model species persistence and is particularly applicable in situations where specific threats (e.g., disease) may depend on the
By
Ecosystems, Fort Collins Science Center
October 18, 2018

This is the first field study of its kind to combine radio telemetry, passive samplers, and pesticide accumulation in tissues to characterize the amphibian exposome as it relates to pesticides. Understanding how habitat drives exposure in individuals (i.e., their exposome), and how that relates to individual health is critical to managing species in an agricultural landscape where pesticide exposu
By
Ecosystems, Fort Collins Science Center
August 27, 2018

Metapopulation ecology and landscape ecology aim to understand how spatial structure influences ecological processes, yet these disciplines address the problem using fundamentally different modeling approaches. Metapopulation models describe how the spatial distribution of patches affects colonization and extinction, but often do not account for the heterogeneity in the landscape between patches.
By
Ecosystems, Fort Collins Science Center
April 30, 2018

Status of the threatened Chiricahua Leopard Frog and conservation challenges in Sonora, Mexico, with notes on other ranid frogs and non-native predators

In North America, ranid frogs (Ranidae) have experienced larger declines than any other amphibian family, particularly species native to the southwestern USA and adjacent Mexico; however, our knowledge of their conservation status and threats is limited in Mexico. We assessed the status of the federally listed as threatened (USA) Chiricahua Leopard Frog (Lithobates chiricahuensis) in Sonora, Mexic
By
Ecosystems, Northern Rocky Mountain Science Center
February 15, 2018

Emerging infectious diseases are an increasingly common threat to wildlife. Chytridiomycosis, caused by the fungal pathogen Batrachochytrium dendrobatidis (Bd), is an emerging infectious disease that has been linked to amphibian declines around the world. Few studies exist that explore amphibian-Bd dynamics at the landscape scale, limiting our ability to identify which factors are associated with
By
Ecosystems, Fort Collins Science Center
November 30, 2017

The pervasive and unabated nature of global amphibian declines suggests common demographic responses to a given driver, and quantification of major drivers and responses could inform broad-scale conservation actions. We explored the influence of climate on demographic parameters (i.e., changes in the probabilities of survival and recruitment) using 31 datasets from temperate zone amphibian populat
By
Ecosystems, Forest and Rangeland Ecosystem Science Center, Fort Collins Science Center
November 13, 2017